After more than a year of protests, on May 27 Washington State Attorney General Bob Ferguson announced felony charges against three Tacoma cops for the brutal murder of Black resident Manuel Ellis. 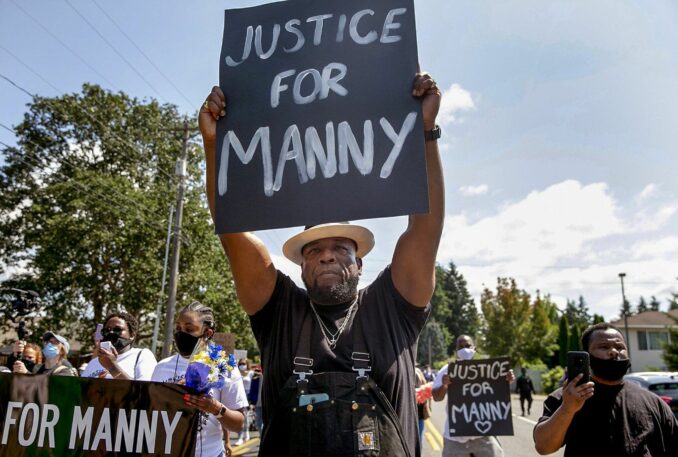 The arrests very much reflect national year-long protests against the police murders of George Floyd, Breonna Taylor and many others, as well as the demands of the Ellis family and the anti-racist movement of the Seattle-Tacoma region for justice.

Ellis, after temporarily stopping traffic while walking across the street, had been quickly assaulted by cops, led by Burbank and Collins, who knocked him to the ground. They then “choke-holded” him, shot him several times with taser darts and hogtied him with his wrists shackled to his ankles. He was forcibly held face down under pressure, with 20 cops on the scene, in the same manner as George Floyd.  Paramedics insisted that the cops get off him, but Ellis died at the scene.

His last words were, “I can’t breathe, sir.”

The murder of Ellis by Tacoma cops took place on the Tacoma city line late at night March 3, 2020, two months before the murder of George Floyd. It took 450 days and several bogus police investigations for the cops to be arrested. The whole

case might have been shelved by lying cops and civilian officials had it not been for the earthshaking movement for George Floyd and so many other people of color. More and more, families and loved ones of those murdered by cops are emboldened to come forward and fight back.

When she participated in Black Lives Matter protests, Manuel Ellis’ sister, Monet Carter-Mixon, came across three people who had taken video of her brother’s murder. The videos showed Ellis “wasn’t even resisting,” according to one videographer.

Ellis’ mother, Marcia Carter-Patterson, expressed disappointment that more cops on the scene weren’t criminally charged. The community is watching to see if the charges against the cops are followed up by prosecution.

Tacoma Action Collective, a Black community organization, has called for “Justice for Manuel Ellis” throughout the last year. A huge portrait of Ellis has been painted on a building in Tacoma’s historic Black community, and a community garden in his name has been built and maintained at the intersection where he was killed.