For the past month, Greek workers have been protesting the right-wing New Democracy government’s attempt to enshrine a 10-hour work day into law — as well as serious restrictions on the right to strike and other rights workers have won over decades of struggle. New Democracy has justified these attacks as being the only possible response to creditors’ demands for more austerity, based on Greece’s external debt being 205% of its GDP. 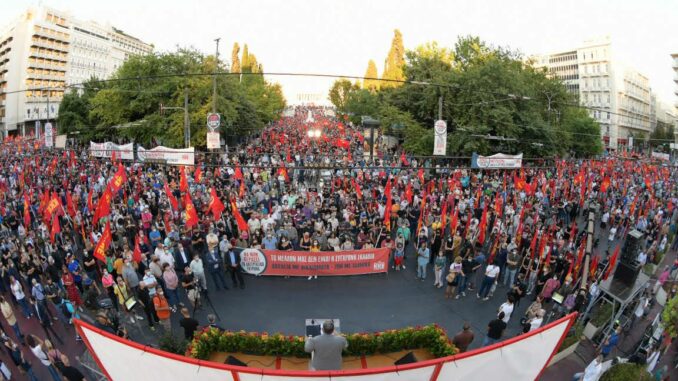 The government proposal, reflecting what is current workplace practice in Greece, would allow employers to force workers to accept comp time in lieu of overtime pay.

The Greek Communist Party (KKE) and the All Workers Militant Front (PAME) organized the rally in Athens at Syntagma Square. It drew tens of thousands of workers, including “self-employed” and unemployed people, students and pensioners, to protest this bill.

KKE General Secretary Dimitris Koutsoumbas ended with the message: “We refuse to become slaves in the 21st century! The monstrous antilabor law must not be submitted!” Earlier he pointed out, “The working class, the people, have no other choice but to respond to the war with war — with their own weapons: the broad information campaign, the organization, the unwavering class struggle, their righteous demands, the overthrow of this dark situation.” (tinyurl.com/rrkayzum)