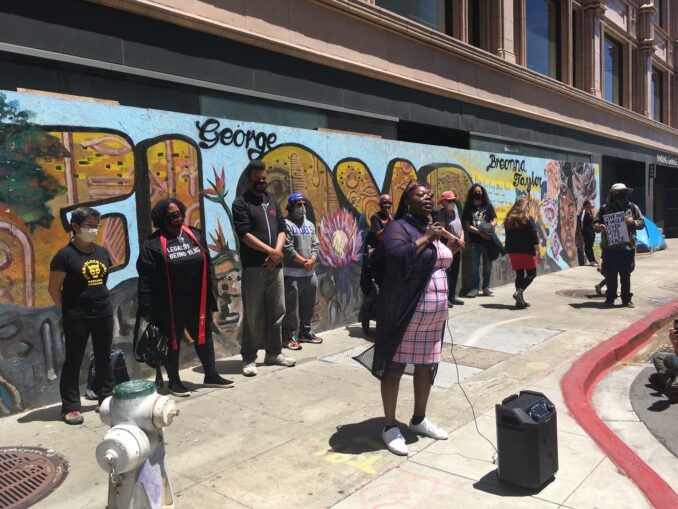 Barbara Doss, mother of Dujuan Armstrong, at May 25 press conference and rally.

Oakland’s social justice community came together May 25 at the downtown mural of George Floyd, on the one-year anniversary of Floyd’s lynching at the hands of Minneapolis police. Cat Brooks, co-founder of the Anti Police-Terror Project, denounced “militarized and out-of-control police departments” in Oakland and across the country that target Black and Brown people in particular.

George Galvis, executive director of Communities United for Restorative Youth Justice, pointed out that during the several weeks the trial of Floyd’s killer Derek Chauvin was going on, 64 more people were killed by police in the United States. Minister Cherri Murphy said Oakland spends more on police than on programs that benefit the people and is now cooking up plans for an “unnecessary” new police headquarters at a cost of $473 million.

Barbara Doss said not only police but prison guards are involved in the continuing pattern of killings of Black community members by agents of the state. Doss lost her son Dujuan Armstrong, a 23-year-old father, when he was asphyxiated by guards in 2018 at nearby Santa Rita Jail, which houses 4,000 inmates. “I’m not letting it die down,” she said. “I’m here to stand up for justice for my son.”

— Report and photo by Dave Welsh