On the Muslim holiday Eid Al-Fitr, Gujjar Nala and Orangi Nala residents, known as affectees, established a protest camp outside of the Karachi Press Club to draw attention to the ongoing demolitions of poor peoples’ housing taking place in Karachi, Pakistan. At the demonstration, protesters connected their struggle with struggles against state-sanctioned terror taking place elsewhere in the world. 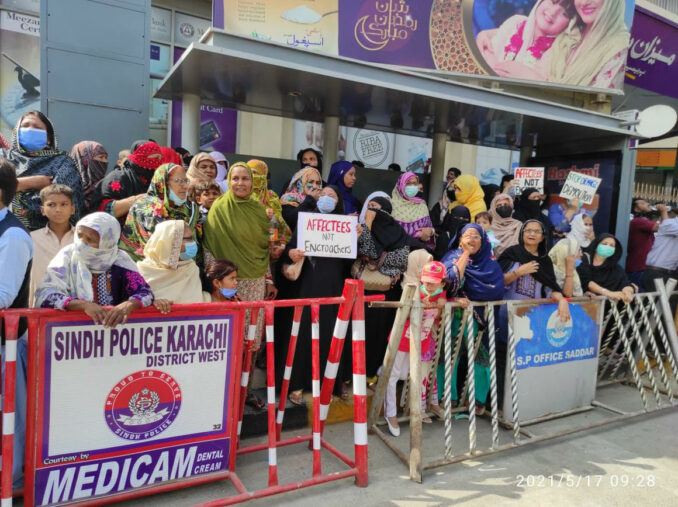 May 17, protest outside of Supreme Court, Karachi

One affectee, holding a Palestinian flag, stated that Israel’s occupation of Palestinian land, the demolition of Palestinian homes and systemic attacks against the Palestinian people are similar to the government and corporate entities’ acts of terror targeting Karachi’s poor workers. He explained how Israel’s barbarity against Palestinians is like Bahria Town and the Sindhi government’s displacement of Orangi and Gujjar Nala residents — oppressors inflicting violence against the oppressed for the sake of occupying and controlling land. (Fawad Hazan’s Tweet, May 13)

Since Workers World last reported on Karachi Metropolitan Corporation’s (KMC) “anti-encroachment” (gentrification) drive against people residing near the Orangi Nala and Gujjar Nala, the state continues its attempt to dispossess the people, while the people continue to resist this state violence.

Orangi Nala and Gujjar Nala affectees, along with progressive organizations including the Awami Workers Party-Karachi and Karachi Bachao Tehreek (KBT), protested outside of the Supreme Court Karachi Registry during a hearing May 17. They sought to maintain a court-ordered stay that would suspend the government’s demolition of affectees’ homes.

That same day, Pakistan Peoples Party, the dominating political party in Sindh, ransacked Awami Workers Party-Karachi’s office, used by KBT for meetings and organizational work and by the Gujjar Nala Mutasireen Committee. On May 18, affectees were able to secure a stay order until June 1. While this was a victory for the people, the state responded with horrific acts of violence.

KBT reported that during court proceedings, at least three homes were being demolished near Moosa Colony, Gujjar Nala. (KBT’s Instagram, May 18) That night KBT reported that Younis, a 32-year-old man, was barbarically murdered by Sindh police during a drug raid near Gujjar Nala. The police operation included a baton charge, which led to a stampede. In order to protect himself, Younis attempted to run away, but fell into the Nala. “The police then crushed his skull by throwing a [large] rock at him.” (KBT Twitter, May 19)

Amid growing state violence against resisters, KBT members went to Gujjar Nala May 26 to document the state’s violations of the court’s stay order. When KBT members arrived, KMC employees told them that KMC was at Gujjar Nala to clean the drains. However, demolition workers hired by KMC informed KBT that they were there to demolish homes.

After blatantly lying to KBT and violating the court order, KMC began aggressively yelling at KBT members, shouting that KMC members — government officials — were not answerable to the people. The state then threatened to arrest a KBT member for filming the state’s intimidation tactics. Other KBT organizers formed a human chain around him and fought for his safety.

After the May 26 events, the KBT issued a statement that they expected an escalation in KMC’s brutality targeting affectees, activists and KBT’s legal team. They called for solidarity and support to ensure that workers’ homes remain protected. (KBT Instagram, May 28)

For those of us in the Global North, who reside at the center of the imperialist empire, now more than ever we must engage in international acts of solidarity and generate strategies and tactics to strengthen our alliances with worker-led grassroots organizations around the world.