People of African descent inside the U.S. have been fighting for the right to reparations, beginning when 4 million people were freed as chattel following the Civil War. The first call for reparations was for 40 acres and a mule — 40 acres of land for a free farmer and a mule to pull the plow.

For over 150 years, every atrocity and crime suffered by Black people — from police terror to disproportionate poverty to lack of political representation — has cried out for some form of reparations or justice. The long-term solution will only come about when all class relations, including white supremacy, are uprooted by a revolutionary transformation of society to bring about socialism. 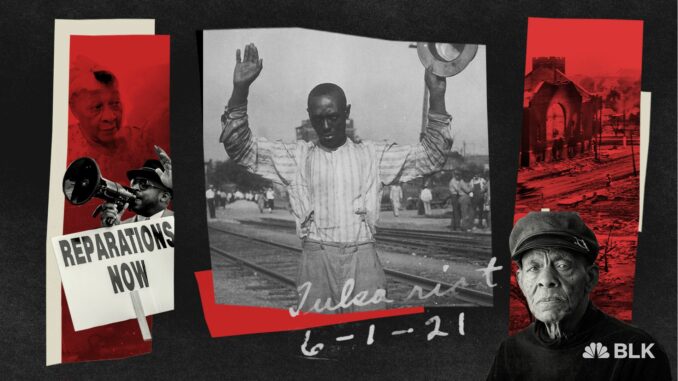 One of the most egregious atrocities that cries out for immediate reparations took place 100 years ago in Tulsa, Okla. For two days, May 31 and June 1, racist vigilante whites went on a rampage in the African American Greenwood District, known as “Black Wall Street,” destroying homes, churches, schools and businesses owned by Black people. Greenwood had become economically prosperous due to the oil boom. But the Ku Klux Klan had gained strength in numbers throughout the country, and Tulsa was no exception.

Original reports claimed the death count of Black people to be 36, but according to some historians, the death count could have been as high as 300. Ten thousand Black people became homeless, and 40 blocks of the District were obliterated. For decades this massacre was hidden from the history books.

What sparked the “Tulsa Race Massacre” was the May 30, 1921, arrest of a young Black man, Dick Rowland, who was accused of assaulting a white elevator operator, Sarah Page. When a white mob of 1,500, with backing of city officials, tried to lynch a jailed Rowland, an armed group of 75 Black brave men, many of them World War I veterans, confronted them but were forced to retreat to segregated Greenwood. Rowland was eventually exonerated.

According to the 2001 Oklahoma Commission to Study the Tulsa Race Riot of 1921, “Tulsa was likely the first city to be bombed from the air” in the U.S., with kerosene bombs dropped by white men from airplanes. Sixty-four years later on May 13, 1985, the City of Philadelphia dropped a bomb on the predominantly Black Osage Avenue destroying 60 homes in an attack on the MOVE family.

Lessie Benningfield “Mother” Randle, a 105-year-old survivor of the Tulsa massacre, filed a 2020 lawsuit saying that $100 million worth of property was destroyed in 1921, with no compensation from the mainly white ruling-class oil barons. The lawsuit goes on to say, “Greenwood and North Tulsa Community residents continue to face racially disparate treatment and City-created barriers to basic human needs, including jobs, financial security, education, housing, justice and health.” (CNN, Sept. 2, 2020)

The lawsuit calls for establishing “a victim compensation fund, mental health and education programs for residents of Greenwood and North Tulsa and a college fund for descendants of massacre victims. It seeks construction of a hospital in the community and asks that Black residents from the Greenwood and North Tulsa communities have priority consideration for city contracts.”

The Black people of Tulsa are long overdue for these reparations on behalf of the pain and suffering endured by their ancestors in 1921 — passed down as the present-day racist inequities they face.