Western imperialists and their media pundits are once again crying “foul” against the sovereign government of Belarus and its duly elected president, Alexander Lukashenko. On May 23, a Ryanair passenger plane, scheduled to fly from Greece to Lithuania, was forced to land in Minsk, Belarus. 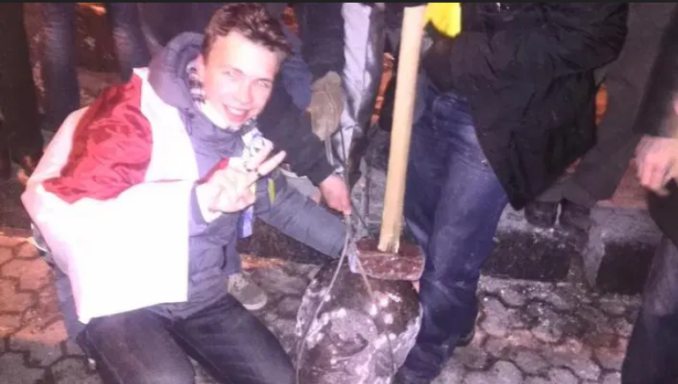 Neo-Nazi Roman Protasevich taking part in destruction of a statue of Bolshevik Revolution leader V.I. Lenin in the Ukraine, 2014.

On the plane was 26-year-old Roman Protasevich, whom the imperialists identify as a journalist. Protasevich has a history of encouraging violence against President Lukashenko and his supporters. He and a few other passengers, apparently close to Protasevich, were detained by Belarusian authorities.

According to a May 24 article in Pravda.ru, “It was a Ryanair pilot who made the decision to land the plane with Protasevich on board in Minsk after he received a message about a possible bomb on board.”

The Western corporate media is omitting this part of the report. Instead they charge the Lukashenko government with “hijacking,” claiming the landing was somehow politically motivated. U.S. and European Union operatives blame Lukashenko for forcing the plane down, without providing a shred of evidence that his administration did anything wrong.

Pravda.ru points out that “Svetlana Tikhanovskaya, whom the West recognizes as the President of Belarus, was flying over the territory of Belarus too, but nothing happened to her.” Tikhanovskaya is considered the “leader” of the anti-communist and neoliberal opposition to Lukashenko.

The corporate media is ignoring many simple facts, and it is painting Protasevich out to be some kind of “victim.”

Who is Roman Protasevich?

Nexta is widely known for encouraging violent attacks against the Belarusian state and is popular among supporters of the EU. Nexta is often discredited, even by major media outlets such as BBC, for promoting false information about Russia and Belarus. (BBC News, May 24)

Protasevich got his start in the anti-communist, oppositionist movement against Lukashenko in 2011 at the age of 16. Some corporate media analysts have been quick to point out that at that age he was expelled from school for posting YouTube videos that were hostile toward the Belarusian government. They omit reporting that Protasevich was a leader of a neo-Nazi organization in Belarus known as the “Youth Front.”

According to various social media posts, Protasevich was active in the Maidan movement that led to the violent coup in Ukraine in 2014. In one image, Protasevich can be seen participating in the destruction of one of the last V.I. Lenin statues left in Ukraine. He was wrapped in the Belarusian National Republic flag, which was used when the German Imperial Army occupied Belarus during World War I and later by Nazi collaborators during World War II. (FOIA Research, May 25)

A leader of the Azov Battalion — an openly neo-Nazi militia that was one of many white-supremacist groups contributing to the Ukrainian coup — publicly claimed Protasevich fought alongside Azov in 2014 and worked for their press. (Grayzone, May 26)

The treatment of Protasevich by the Western media, particularly in the U.S., is strikingly identical to their coverage of the anti-Putin candidate, Alexei Navalny, a few months ago. Like Protasevich, Navalny is another free-market proponent with strong Nazi connections.

The U.S. has taken steps to overthrow Lukashenko ever since he was first elected in 1994, when he won on a campaign against corporate privatization and neoliberal policies.

As a former member of the Communist Party of the Soviet Union, Lukashenko has consistently rejected neoliberalism, maintained pro-socialist imagery and has restored some socialist programs from the Soviet-era. As a result of many fulfilled promises, Lukashenko has been re-elected five times since 1994.

Protasevich admitted on camera to taking part in the organization of “mass unrest” in Belarus in August and September, 2020. (New York Times, May 25)

This past summer, U.S. and EU officials thought they had an opportunity to finally oust Lukashenko. Oppositionists carried out massive rallies, many of which turned violent. Imperialist officials falsely declared opposition leader Svetlana Tikhanovskaya as the “official” president of Belarus — similar to the unsuccessful attempt by the U.S. to proclaim Juan Guaidó as president of Venezuela.

In terms of the false charge against Belarus for hijacking, it should, be noted instead that the U.S. government was involved in the forced landing of a plane for political reasons in 2013 — a flight carrying Bolivian President Evo Morales. (Grayzone, May 26)

The U.S. and European imperialist governments and media have demonized Lukashenko and are calling for sanctions against the Belarusian people. White House Press Secretary Jen Psaki said Washington is working with NATO and the EU about “potential next steps.” (The Hill, May 24) These are the forces that bankrolled and coordinated the 2014 coup in Ukraine, in which Protasevich proudly participated.