At every stage in the criminal injustice system, LGBTQ2S+ people are overrepresented, including within the juvenile justice system. 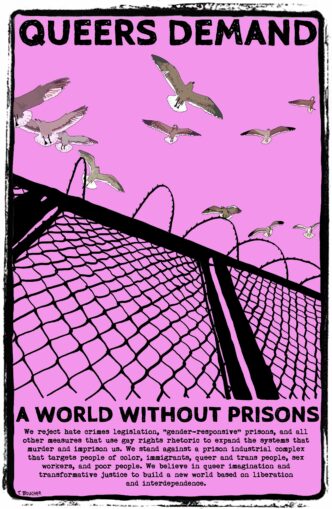 Queers Demand a World Without Prisons: “We reject hate crimes legislation, ‘gender-responsive’ prisons, and all other measures that use gay rights rhetoric to expand the systems that murder and imprison us. We are in solidarity against a prison industrial complex that targets people of color, immigrants, queer and trans people, sex workers, and poor people. We believe in queer imagination and transformative justice to build a new world based on liberation and interdependence.”  Credit: Tyrone Boucher

Incarceration rates also reflect the discriminatory trends of the arrest rates, with queer women facing the brunt of disproportionality. They, along with trans women — whose sexual orientation may overlap with queer identity or not — also tend to have the least amount of data to show what is happening to them.

“Once behind bars, trans people face extremely high rates of harassment and physical and sexual assault, are frequently denied routine health care and are at high risk of being sent to solitary confinement. Black and Pink found that 44% of transgender, nonbinary gender and [Indigenous] Two‐Spirit [people] in their sample were denied access to hormones they requested.” (Prison Policy Initiative)

This high percentage of LGBTQ2S+ people persists in prisons, jails and migrant detention centers and interlocks with other oppressions based on race, disability and income. Data demonstrates that Black, Latinx and Indigenous people are locked up in numbers incredibly disproportionate to their share of the population. Many LGBTQ2S+ people are people of color, and many have disabilities.

There are no data on Two-Spirit Natives incarcerated. However, according to the Appeal, South Dakota leads the country on jail admissions based on arrests for nonviolent crimes, and Native people account for the majority of all arrests in that state.

“In South Dakota, the people who are arrested and admitted to jail are disproportionately Native. Although Natives make up 8.7% of South Dakota’s population, they are roughly half of those booked into jails in the state. Racial disparities in incarceration rates exist nationwide — Black people are jailed at more than 4 times the rate of white people — but disparities in South Dakota are far greater: According to data from the Vera Institute of Justice, Natives between the ages of 15 and 64 are incarcerated at 10 times the rate of white people in South Dakota.” (The Appeal, Sept. 18, 2019)

Oppression based on gender and sexual orientation is maintained through various social enforcements such as, but not limited to, criminalization and the structure of the nuclear family. These tactics rely on the punishing power of imposed isolation, confinement and imprisonment.

Overrepresentation of LGBTQ2S+ people in the criminal legal system is largely due to obstacles LGBTQ2S+ youth face after fleeing abuse and lack of acceptance at home. In order to survive, many are pushed toward drug sales, theft and sex work — which dramatically increase the risk of arrest and confinement.

Up until 1973, the American Psychiatric Association listed homosexuality in its Diagnostic and Statistical Manual (DSM). That medical definition — and the assumptions that continued even after it was delisted — has been used to confine, isolate and punish many LGBTQ2S+ folks. Because of the material conditions faced by LGBTQ2S+ individuals, many find themselves with high rates of depression, anxiety and suicidal ideation. In this context, someone needing mental health care can end up confined for an indefinite stint in a hospital under strict surveillance — experiencing something more like punishment than help.

Liberation for those oppressed based on their gender or sexual orientation means envisioning and building a world without prisons, jails and migrant detention centers. These structures do not keep people safe from violence, but perpetuate violence rooted in the origins of these institutions on this continent.

Prisons, jails and detention centers in the U.S. evolved from enslavement of African people. Enslavement legally codified Black people as property. During the shift from slavery to the system of convict leasing to today’s mass incarceration, there have been continuously shared struggles to abolish these institutions that are based on extracting profit from warehousing human beings.

Now the fight has turned to ending the profit-making prison-industrial complex and abolishing the legal status of capitalist private property. Abolition also means the end to borders and criminalization of migrants, who are simply workers and oppressed people seeking to find a place they can survive.

Societal organization based around meeting human needs can and must be built in the wake of the afterlife of enslavement.

Many of the reasons LGBTQ2S+ people end up being held in prisons, jails and detention centers could be alleviated first and foremost by abolishing capitalism. This project of abolition — whether it be prison abolition or the abolition of capitalism — is not simply a negation. It is a generative project that requires collective building.

This means building up social support for LGBTQ2S+ youth within families, schools, communities and other institutions; eliminating discrimination against LGBTQ2S+ people in housing, employment, and other realms; eliminating homelessness, for housing is a human right; ending criminalization of sex work; and providing free, gender-affirming health care for all.

No cages! No borders! We will accept nothing less.