Right-wing lawmakers in 15 states are passing legislation that will require public school teachers to teach a nationalist narrative of history, which ignores the genocidal, racist, sexist, anti-immigrant and oppressive history of the United States. Specific legislation differs among the 15 states, but they all include a shared goal of banning the application of “critical race theory” in social studies instruction.

This means teachers in Arizona, Arkansas, Idaho, Iowa, Louisiana, Mississippi, Missouri, New Hampshire, North Carolina, Oklahoma, Rhode Island, Tennessee, Texas, Utah and West Virginia will be restricted from — and in some cases fined for — teaching about the role of racism in shaping the legal system and creating economic disparity and achievement gaps. And they won’t be able to explain how inequities that still exist today are rooted in a white-supremacist past.

One of the curriculum resources that conservative lawmakers oppose is The 1619 Project. Its introduction states: “The 1619 Project is an ongoing initiative from The New York Times Magazine that began in August 2019, the 400th anniversary of the beginning of American slavery. It aims to reframe the country’s history by placing the consequences of slavery and the contributions of Black Americans at the very center of our national narrative.” (project1619.org)

Traditional education in the U.S. teaches students that the country’s birth occurred in 1776. This narrative ignores its formation as a settler colony, based on stolen land and genocide of Indigenous peoples and the 157 years of chattel slavery that built the colonies before 1776. It ignores the role of the slave-trade and the character of settler-colonialism in political and economic independence from Britain. Republican lawmakers are trying to ban the 1619 project and multiple other critical teaching resources like it, in an attempt to prohibit an honest, authentic teaching of U.S. history.

Many of these lawmakers not only want to restrict discussions about critical race theory, but they are attempting to limit education about the role of sexism, heterosexism, xenophobia and class oppression throughout U.S. history. In Missouri, the proposed legislation would ban public school teachers from using any resources from the 1619 Project, Learning for Justice Curriculum of the Southern Poverty Law Center, Black Lives Matter at School, Teaching for Change and the Zinn Education Project.

If successful, teachers in these states would be forced to teach with whitewashed history textbooks that erase the struggles and contributions of oppressed peoples throughout this country’s history. Idaho, Iowa, Oklahoma and Tennessee recently passed legislation that severely limits the ways teachers are allowed to discuss racism, sexism, homophobia, immigration, classism and other issues which right-wing legislators aim to suppress.

Teaching the real history of the U.S.

Another collection of teaching resources that is at risk in these states is the Zinn Education Project, which was created with the belief that “through taking a more engaging and more honest look at the past, we can help equip students — and all of us — with the analytical tools to make sense of and improve the world today.”  Their website contains a vast amount of free downloadable lesson plans and articles, which “emphasize the role of working people, women, people of color and organized social movements in shaping history.” (zinnedproject.org) 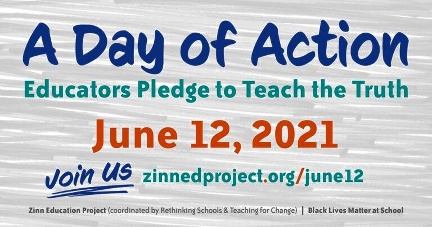 In response to the lawmakers working to ban their educational resources, the Zinn Education Project launched a pledge for educators to sign, saying that whether the reactionary legislation is passed or not, they refuse to lie to students and will continue to teach them the truth about U.S. history.

The pledge states: “We the undersigned educators will not be bullied. We will continue our commitment to develop critical thinking that supports students to better understand problems in our society and to develop collective solutions to those problems. We are for truth-telling and uplifting the power of organizing and solidarity that move us toward a more just society.”

Also, the Zinn Education Project and Black Lives Matter at School are attempting to raise public awareness about the harm the proposed legislation will cause, by promoting countrywide gatherings hosted by Rethinking Schools and Teaching for Change.

These events will take place June 12 at locations that “symbolize or reflect history that teachers would be required to lie about or omit if these bills become law.” Public awareness about this issue is currently slim, so those interested are encouraged to choose a significant location and organize a rally, together with community members and local unions.

Laws like those passed in Idaho, Iowa, Oklahoma and Tennessee require, either through commission or omission, students to be taught a reactionary view of history, full of falsehoods and backward ideas. Every student deserves a responsible education rooted in truth and respect for humanity.

Even the most gruesome, repulsive and controversial historical events can be analyzed by youth, if done with a responsible use of dialogue, reflection and communication. Educators, who are dedicated to teaching U.S. history in ways that are authentic about the roles all forms of bigotry and oppression have affected the country’s development, are asking those who agree with them to show solidarity with teachers who are being denied the right to teach their students the truth.

Pulitzer Prize-winner Nikole Hannah-Jones was recently denied tenure by the University of North Carolina Board of Trustees. Conservative board members voiced opposition to The 1619 Project, which she oversaw. It exposes the truth about the history of slavery in the U.S.