Tamir’s Campaign held a virtual event May 12 to demand the federal Department of Justice reopen the case of Tamir Rice, who was only 12 years old when Cleveland police murdered him Nov. 22, 2014. The DOJ under the Trump administration quietly closed its investigation last year with no charges against officer Timothy Loehmann, who shot Tamir instantaneously after coming across him playing with a pellet gun, or Loehman’s partner Frank Garmback. Previously a Cuyahoga County Grand Jury declined to indict either cop, and both remained on the force until Loehmann was fired — not for killing Tamir but for lying on his job application! 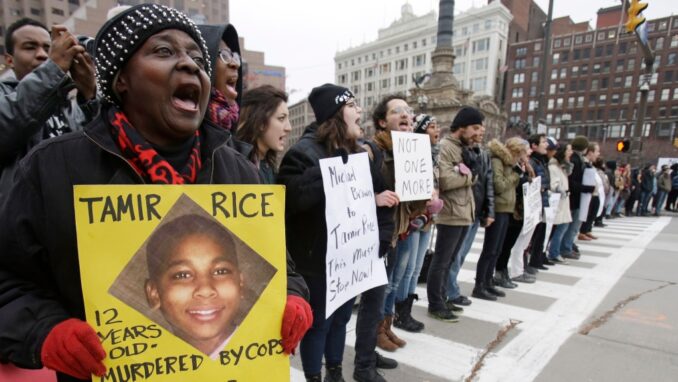 Tamir’s family only learned of the decision by Trump’s DOJ when a whistleblower at the department leaked the news to the New York Times. The Cleveland Police Patrolmen’s Association, which appealed Loehmann’s firing, endorsed Donald Trump for president in 2016.

Tamir’s mother Samaria Rice spoke to the virtual audience about her son: “He was so talented” and is “always dearly missed.” He loved the Cleveland Cavaliers, especially LeBron James. He played drums. His teachers had many good things to say about him.

Ms. Rice explained that her whole family has PTSD from having lost Tamir so violently.  She spoke proudly of her three children — who all managed to graduate from high school, but have not been able to pursue a college education due to the trauma — and her four grandchildren. “I want to see a change in Cleveland,” Rice insisted. “My son was a whole little Black boy, and I want to see him get justice.”

The program drew activists from around Cleveland and other areas. Mothers who lost their sons to police violence in Houston and Benton Harbor, Mich., described the unfathomable grief they share with Samaria Rice. Others, including a senior law professor at Case Western Reserve University and a youth whose father is a police officer, described how Tamir’s lynching opened their eyes to the real character of policing in the U.S.

Rice family attorney Subodh Chandra presented a timeline of events from the 2014 shooting to “deliberate attempts to throw the case” by County Prosecutor Timothy McGinty to the quashing of the DOJ investigation begun under the Obama administration. The Trump DOJ violated the law when it did not inform the Rice family — a “family cheated of justice” — that the investigation was being terminated.

Tamir’s Campaign has written to the U.S. Attorney General Merrick Garland asking that the investigation be restarted no later than June 25, Tamir’s birthday. The Campaign has won the support of 40 Congressional Representatives, including four from Ohio, along with the Cleveland City Council and Ohio Senator Sherrod Brown. More actions are planned.