Since April 28, workers in Colombia have been waging a general strike. The strike was provoked by the third of three recent tax “reforms” imposed by the right-wing government of President Iván Duque. The new taxes squeeze workers at both ends, by raising taxes on personal income and charging sales taxes on basic food items. 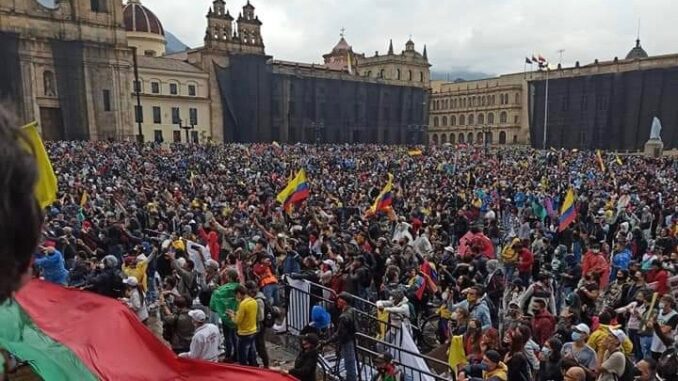 This creates tremendous hardship for Colombian workers, whose average monthly pay is equal to around $310 — well below the worldwide average and less than typical monthly rent for a three-room apartment in the capital of Bogotá. (quora.com) While workers will see their taxes go up by as much as 500%, Duque has cut taxes for transnational corporations and plans to spend billions of workers’ tax money on new jet fighters.

While fruit and other necessities are taxed, Coca-Cola products are tax exempt. Coke is notorious for engaging right-wing death squads to assassinate union leaders in its Colombian bottling plants. (killercoke.org)

The human rights organization Temblores has documented at least 1,173 incidents of police violence aimed at suppressing the general strike between April 28 and May 7. “The organization states that the data results from rigorous work of verification and triangulation of the complaints registered since April 28 by citizens through the different channels of communication established for that purpose,” Telesur reported May 7.

Temblores said: “For nine consecutive days, and despite the violence with which the State has repressed the social protests, citizens have come out en masse to demonstrate and claim their rights in the streets.” (Telesur, May 7)

Police have committed sexual assault, killed close to 40 people on demonstrations and in poor neighborhoods, and arbitrarily arrested almost 1,000 people. A large number of those killed have been youths from 14-30 years old.

Nevertheless the people remain in the streets, holding 35 separate marches in the capital, Bogotá, May 5. Cali, the country’s second-largest city, is seeing the largest protests in its history. Strikers are demanding Duque’s resignation.

On a May 8 webinar hosted by United National Antiwar Coalition, Afro-Colombian human rights defender Charo Mina-Rojas spoke from Colombia about the dire situation facing Black Colombians, who are about 20% of the country’s population. Based on Colombia’s Pacific coast since the 1500s, they have resisted oppression and exploitation since their arrival during slavery. Afro-descendant Colombians were recognized and given land in a 1991 amendment to the constitution.

However, the traditional Black communities are situated atop lands rich in resources and biodiversity. They have faced violence and land theft by wealthy international corporations. Many have been displaced, and their urban neighborhoods are now being disproportionately targeted by state forces and right-wing paramilitaries, especially in Cali.

The National Indigenous Organization of Colombia (ONIC) denounced the “disproportionate actions of the National Police and in particular by the ESMAD (anti-riot squads). . . . Nor can we accept the lack of empathy of this government and its inability to understand that inequality, hunger and poverty also lead to despair and hopelessness and much less naturalize that the response to these events is state violence.” (Telesur, May 7)

About 3.5% of Colombia’s 50 million people are Indigenous, speaking 65 different languages. They face land theft by extractive industry companies, forced displacement and ongoing terror from police and paramilitaries. Many Indigenous leaders have been assassinated; the International Work Group for Indigenous Affairs claims since Duque’s election in 2018, there is “a clearly deteriorating humanitarian situation which, in 2020 alone, left 112 Indigenous people dead in different regions” (iwgia.org)

ONIC is participating in the general strike. On May 7 Indigenous activists tore down a statue of Spanish colonizer Gonzalo Jimenez de Quesada, founder of Bogotá.

The Ethnic Chapter of the Peace Agreement, signed in 2016 by the Revolutionary Armed Forces of Colombia (FARC) and the Colombian government of then-President Juan Manuel Santos, promised rights to the Indigenous and Afro-descendant communities. But since his election President Duque, a protege of ultra-rightist former president Alvaro Uribe, has essentially trashed the Peace Agreement. Some decommissioned FARC combatants are advocating a resumption of the armed liberation struggle.

The U.S. is “utterly and completely complicit” in the wave of terror being visited upon the Colombian people, according to James Jordan, Colombia point person for the Alliance for Global Justice. Speaking on the UNAC webinar, Jordan explained that the hated ESMAD (Mobile Anti-Disturbances Squadron) riot police were created in 1999 under the joint U.S.-Colombia agreement known as “Plan Colombia.” Since the strike began — and in fact since the squadron’s creation — ESMAD has committed massacres, disappearances and arrests in what Colombians are calling a “Duque coup” against the people’s movement.

Colombia is the eighth largest recipient of U.S. financial assistance and the largest in Latin America; a $448 million aid package was passed in Congress last year with bipartisan support. The government’s role in upholding imperialist interests in Latin America and other countries has prompted comparisons to how the Israeli apartheid state functions extending imperialist interests. Colombia is the only Latin American country to be accepted by NATO in 2017 as a “global partner.”

Donald Trump, when he was president, pressured Duque to dismantle the 2016 Peace Accords. President Joe Biden has made zero effort to encourage the Colombian government to honor the accords, which were drafted with input from the Colombian masses and contain chapters on a wide range of issues including rural reform, health, education, poverty eradication, drinking water, political participation, an end to the military conflict, gender justice, illicit drugs and human rights guarantees.

In scrapping the accords, Duque is assuring that Colombia will retain its status as the most dangerous place in the world for union leaders and one of the worst human rights violators for Indigenous and Afro-descendant environmental and land rights movements.

Despite the danger, the people are still protesting and striking in mass numbers. It is imperative that activists in the U.S. and other imperialist countries demonstrate solidarity with the courageous Colombian people. So far there have been large protests in New York, Los Angeles, Portland, San Francisco, Miami, Paris, London and throughout the Spanish state.

To watch the UNAC webinar on Colombia visit tinyurl.com/c9ewykdh.

Martha Grevatt was part of a delegation in solidarity with the Colombian peace process that met with FARC negotiators in 2015 in Havana.