Workers World has received letter after letter from workers incarcerated in Pennsylvania prisons expressing a common concern: “We are at risk of dying from COVID-19, and the only way the pandemic is getting into prisons is from the staff!” 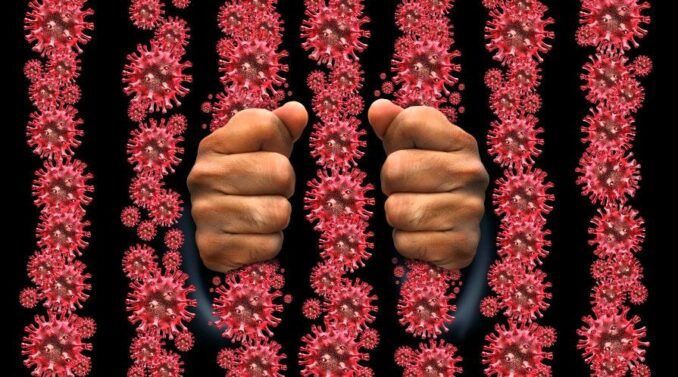 Our incarcerated sisters, brothers and siblings describe a shared crisis: They are subject to 23-hour lockdown, denied visitations and isolated in cells without access to fresh air, exercise or even law library visits. Many who report COVID-19 symptoms are placed in restricted housing units, reviled as “the hole.”

Prisoners threatened with the psychological torture of solitary confinement are much less likely to report when they are sick, causing further spread of COVID-19. Yet prison staff can move unencumbered, unit to unit, block to block.

While case numbers in Pennsylvania prisons remained relatively low during 2020, in December more incarcerated people became infected and died at higher rates than outside populations. This trend continued into 2021.

In January, Pennsylvania held public hearings on the crisis. Pennsylvania Department of Corrections Secretary John Wetzel was on the hot seat to explain what his department was doing to curb the pandemic’s spread.

A report on COVID-19 in the state prisons came Feb. 10, when the department reported 4,048 total COVID-19 positive staff cases with four staff deaths and 9,661 positive cases with 101 deaths among incarcerated workers.

Most likely these numbers were an undercount. After February, the DOC statistics became harder to find, even while anecdotal reports from individual incarcerated workers suggested higher numbers of positive tests and deaths. The DOC’s data then went off-line. Though relaunched in April, navigation of the site is still difficult.

Within Pennsylvania prisons, there are 37,245 incarcerated workers and 15,852 staffers. According to state data released April 21, only 3,133 staff were fully or partially vaccinated — less than 20%.

In some facilities — Albion, Fayette, Pine Grove and Smithfield — 90% or more of staff remain unvaccinated. Positive tests among staff are currently higher than among incarcerated people. (Inquirer.com, April 22)

As of that date, roughly half of incarcerated workers in Pennsylvania have been vaccinated. COVID-19 vaccine is currently available to any adult in the state.

If Pennsylvania prison staff continue to refuse to protect the health of incarcerated workers by getting vaccinated, then the state must begin a massive decarceration program to save the lives of incarcerated people.