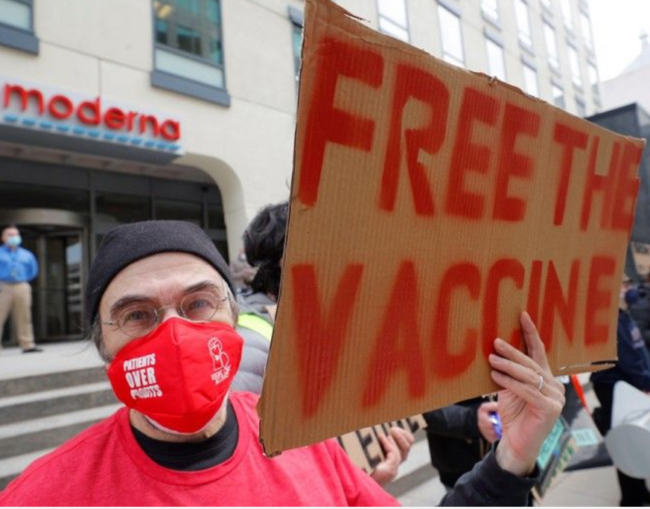 Protests to free vaccines from being corporate ‘intellectual property’ are spreading, here at Moderna headquarters in Cambridge, Mass., April 28.

Gates, co-founder of the Microsoft corporation, is one of the multibillionaires opposed to allowing intellectual property (IP) waivers so all countries could produce vaccines. Gates is allied with Big Pharma in a big way. He made his fortune relying on IP protections on Microsoft products.

Council, which joined 400 plus organizations around the world in urging President Joe Biden to immediately waive intellectual property restrictions on U.S.-owned vaccines. This would assist all countries in the production of less-expensive generic COVID-19 vaccines — and would save human lives.

The Seattle action was led by Councilperson Kshama Sawant and the Seattle Coalition of Indian Americans (SCIA). Sawant said Biden’s recent lifting of the ban on exporting vaccine materials to India dealt with only a tiny part of the problem.

by the refusal of Big Pharma in the West to share the vaccine with India. He said, “What is happening to India will come back to the West.” This is a reference to the fact that continuing pandemic infections anywhere on earth open the way to multiple virus variants that current vaccines may not be able to resist.

As protestors at the rally chanted, “Whose vaccine? People’s vaccine!” Hillary Hayden of the Washington Free Trade Coalition said that “113 countries have yet to receive a single dose of the vaccine” due to Big Pharma’s genocidal priorities. Hayden noted that waivers of intellectual property resolutions have been passed by hundreds of organizations, such as Doctors Without Borders, and emphasized more of this needs to happen. She said people were demonstrating for the vaccine waiver in Atlanta at a recent speech by Biden.

Preston, a member of the 6,000-strong United Auto Workers Local 4121 at the University of Washington, spoke on how he and his co-workers — who were teachers, health care workers and researchers — had helped create COVID vaccines. He stressed the vaccines had been funded by the public, but big pharmaceutical companies were now making obscene profits off those public funds while denying vaccines to people from the Global South.

Both Preston and Sawant demanded free health care for all. The action was also supported by the Community Alliance for Global Justice/AGRA Watch and Socialist Alternative.