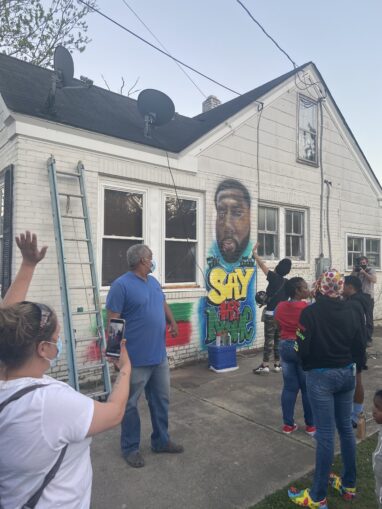 In Elizabath City, N.C., friends and family paint Andrew Brown Jr.’s portrait on his house, where he was killed by state violence.

May 1 — Seven deputies from the Pasquotank County Sheriff’s Department killed unarmed Andrew Brown Jr. in his car next to his home here April 21. The deputies jumped out of a pickup truck with weapons drawn and rushed forward. Fearing for his life, Brown tried to drive forward out of his driveway and away. Deputy sheriffs fired into his car from behind, killing him.

An autopsy commissioned by Brown’s family confirms he was killed by a bullet to the back of the head. At least three of the deputies fired their weapons; none of them have been charged. Four have been returned to active duty.

Protests have continued each night for ten nights since the police execution of Andrew Brown Jr., as the community mourns. His funeral is scheduled for May 3.

Family members remember Andrew as a kind man who provided for his family despite the lack of jobs or opportunities in Elizabeth City. He lived in a quiet neighborhood south of downtown, across the Charles Creek where he had been raised by his grandparents and aunts after the death of his parents. As one close friend Jamaul Riddick told WW, “He’s never been a violent person in his life. He’s never had a gun, never carried a gun, and he’s just not violent.” 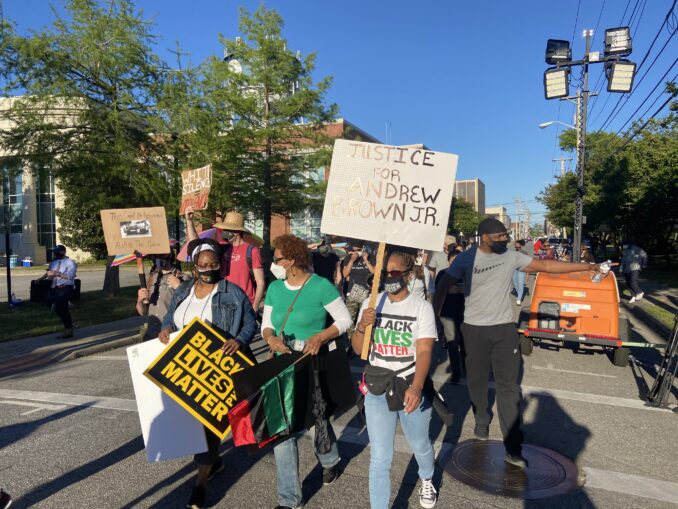 Protests against police violence continue night and day in Elizabeth City, May 2.

Elizabeth City is a majority Black town of fewer than 20,000 people. It was the most important trading hub of the region starting in the late 1700s, when enslaved persons were bought and brought in by plantation owners to labor on the land, and agricultural products were then shipped out.

The nearby Great Dismal Swamp was a source of timber that drove the shipbuilding industry in the town, which lasted until the end of World War II. After the end of that war, shipping and industry left, and the town declined in prosperity.

The swamp was once a haven for enslaved people who had liberated themselves from surrounding plantations. The swamp played an important role as cover for those traveling toward freedom on the Underground Railroad, including some led by General Harriet Tubman.

Recent archaeological studies show that the area was home to a permanent settlement of escaped enslaved Africans, as “the security provided by the swamp’s isolation allowed them to create self-organized communities that spanned generations.” (tinyurl.com/2tskar7b)

More recently the Great Dismal Swamp area has been flipped from a haven from enslavement to a base for global oppression. The area is now home to a 7,000 acre “United States Training Center” — the Blackwater/Xe/Academi headquarters for training soldiers and police in repression tactics.

Originally founded in 1997 as Blackwater by Erik Prince — right-wing billionaire and brother to Betsy Devos, Secretary of Education under President Donald Trump — the company was later rebranded Xe Services, and then Academi when acquired by a group of private investors.

Named for the peat bogs of the swamp, the Blackwater center continues to be used to train mercenaries like those so notorious for their deadly cruelty during the U.S. occupations of Iraq and Afghanistan. And the center is where police are trained to use military tactics and equipment against the civilian population of the U.S., especially focusing on violent suppression and occupation of Black communities. 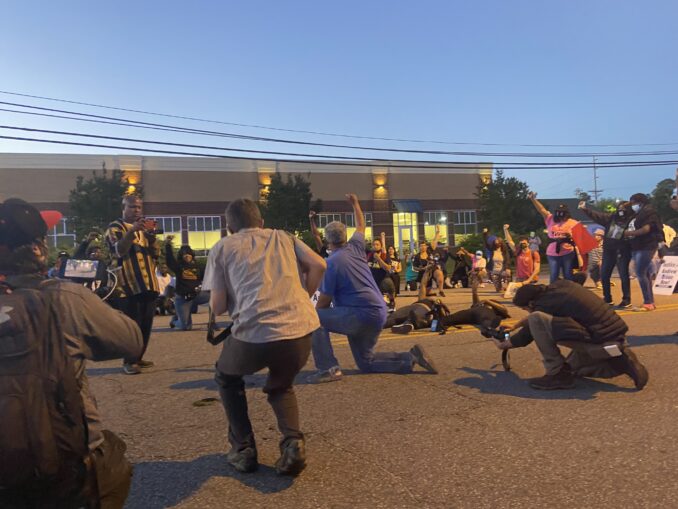 Protests against police violence continue night and day in Elizabeth City, May 2.

Since the beginning of the protests, Brown’s family and local activists have connected his murder to the conditions in Elizabeth City, as well as to racism and police murders across the U.S. and in the Tidewater Region of Virginia and North Carolina.

Joe McCullen, Brown’s uncle, remembers having a cross burned in his yard by the Klan. Brown’s aunt, Joyceanne Ingram, speaks of her experiences suffering racist harassment on the street, despite her status as a veteran of the large nearby Coast Guard base. They both spoke to WW about the lack of jobs in town as exacerbating oppression: “If you and your white friend walk in to get a job, your white friend may walk out with a job.”

Demonstrations are continuing through May Day weekend with no projected end to the nightly marches. Solidarity actions are planned for Durham, N.C., for May 1, and the community in Elizabeth City hopes for continued support from across the country.

Activists from Virginia Beach, Va., who have been organizing around the police killings there in April of Donovon Lynch and Deshayla Harris, have been present and visible in Elizabeth City. Lynch was a cousin of singer-songwriter and music producer Pharrell Williams.

The main demand in Elizabeth City at the moment concerns the release of the tapes documenting the killing of Brown. This includes any body cameras or dash cameras from the seven deputies or more present at the shooting. So far Pasquotank County authorities have refused to make any of the footage public.

Two family members — Brown’s eldest son and his mother — and their attorneys were shown only about 20 seconds of edited video from one camera. That footage clearly showed Andrew Brown sitting in his car, with his hands completely visible on the steering wheel, as he was killed from behind with an “uncountable” number of shots.

Pasquotank County has declared a state of emergency despite the peaceful character of the relatively small demonstrations. Police in full riot gear — beating their clubs in unison like gladiators to produce an intimidating thunder — have arrested activists, lawyers and journalists for alleged curfew violations.

In response to continued pressure from the movement against police killing, the curfew was changed from 8:00 p.m. to midnight. But police have been brought in from across North Carolina in preparation for barricading all roads in and out of town and in an attempt to silence all rebellion against this most recent state-sanctioned murder.