YahNé Ndgo opened the rally outside the Penn Museum in Philadelphia April 28 by denouncing the University of Pennsylvania’s sadistic desecration of the remains of two young Black MOVE family members. Ndgo, representing Black Lives Matter Philadelphia, stated: “We can never forget the humanity of Black people, and we should never have to remind people of the value of our lives. Black and Brown bodies are not subjects for you to study. We are human beings, and our lives matter!” 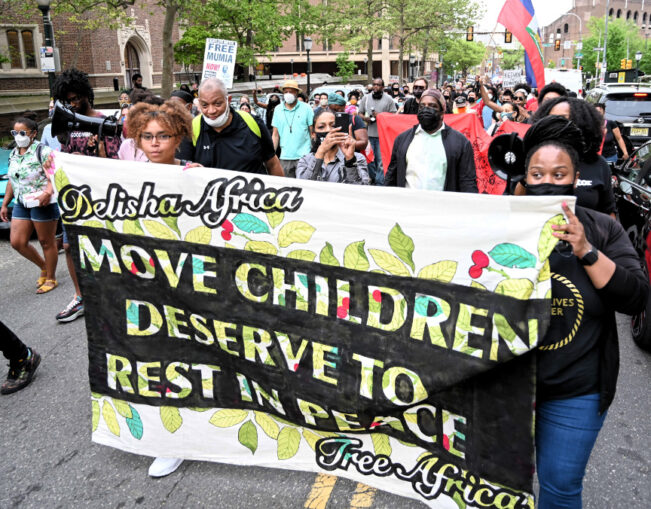 Nearly 400 people attended the rally, including UPenn students and faculty. It followed a press conference with the MOVE family April 26, after news surfaced that anthropology professors at the school and Princeton University had kept the remains of Tree Africa, 14, and Delisha Africa, 12, who were killed May 13, 1985, when the police dropped an incendiary bomb on MOVE’s house.

City officials let the resulting fire burn as police fired tens of thousands of bullets at the burning house, preventing anyone from leaving it. The resulting conflagration killed 11 people, including five children, and destroyed 61 homes in a residential Black neighborhood.

Murder and then more inhumanity

At the rally, Mike Africa Jr., son of MOVE 9 members Debbie Africa and Mike Africa, recalled having played with the children killed in the fire. He said: “The medical examiner was paid to find out how our people died. They took the bodies to a lab, left them unrefrigerated and let the bodies decompose. This was so egregious they were fired. The people from Penn Museum who took over were supposed to be ethical, but they are the monsters we are talking about today.”

Africa read from a quote located below the graphic of a helicopter dropping a bomb from MOVE’s popular orange-on-black “Welcome to Philadelphia” T-shirt. The quote reads: “This was not an accident. This was deliberate murder. The circumstances surrounding it were horrible, and even more horrible to me was the fact that the perpetrators basically were never in any way punished.” That was said by the forensic anthropologist Dr. Alan Mann, who was hired by the Philadelphia Medical Examiner’s Office to analyze the remains of those killed in the fire.

Africa said: “Alan Mann is the same monster who has done these horrible things to my sisters. The other monster, Janet Monge, is on a video describing how my sister suffered a bone fracture ‘because something heavy probably landed on her.’”

Mann worked at the Penn Museum where he reportedly subjected the bones to detailed analysis, but later used the children’s remains as science specimens in anthropology classes. The bones were kept in cardboard boxes in non-climate-controlled storage. When Mann transferred to Princeton in 2001, he took the remains with him.

The children’s remains were purportedly bounced back and forth between the two Ivy League institutions over the decades. Their parents, still alive, were never informed.

In 2019, the remains were held at Penn Museum where Monge, Mann’s former student, used them in instructional online videos offered by Princeton and UPenn. Once again, this was done without consent of the children’s relatives.

Monge’s course was titled: “Real Bones: Adventures in Forensic Anthropology” — and MOVE is referred to as a “case study!” The videos, which were available for viewing in classes that began the week of April 19, have been taken down due to protests.

While UPenn officials have issued two apologies which have been published by news outlets, they have yet to apologize to MOVE family members in person.  They also claim they do not have the remains, nor do they know where they are.

Abdul Aliy Muhammad broke the news about the children’s remains in a Philadelphia Inquirer opinion piece published April 21. He stated at the rally: “Two years ago we found out that Penn Museum had the remains of 53 people thought to have been enslaved on plantations in Cuba. When we demanded reparations, Penn started a committee to ‘consider the issue.’ A year later we learned that they also had 14 craniums of Black people dug up from graves where Franklin [athletic] Field is today.”

Muhammad told the crowd, “This is disgusting, this is gross. This is not okay.”

News of the MOVE children’s remains came just days after Penn Museum officials made a commitment to repatriate Black and Indigenous remains held for over a century in their Samuel Morton Collection of Human Crania. Morton had used the collection of 1,000 skulls of enslaved African and captured Indigenous people in a racist study aimed to perpetrate a false theory of white supremacy.

Morton’s “experiments” were used to justify removal of Indigenous people in the 1830s and later were part of a pattern of nonconsensual experimentation on Black people for medical purposes. One was the infamous 40-year Tuskegee Institute “experiment,” where hundreds of Black men were deliberately left untreated for syphilis, even after penicillin was found to be a cure in 1947.

Rally speakers called for Monge to be fired and for restitution and accountability from UPenn, emphasizing that Tree Africa and Delisha Africa deserve to rest in peace. Pam Africa, Minister of Confrontation for the MOVE family, said, “The bomb they dropped on our family is exploding 36 years later and exposing the intent of the cops to kill John Africa and all of our family.”

The rally was followed by a march to the campus home of UPenn President Amy Gutmann, where demonstrators blocked traffic on Walnut Street for over an hour. Speakers announced that the 36th anniversary observation of the MOVE bombing will be held in Philadelphia May 15.