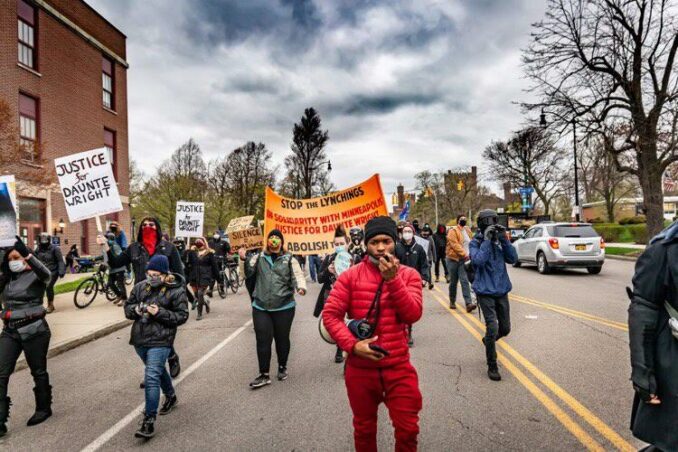 Buffalo’s largest anti-police demonstration so far this year was held on April 16th. The action, called by Workers World Party, drew activists from across the left to demand police abolition and stand in solidarity with Minneapolis in the wake of Daunte Wright’s murder. Speakers addressed the police brutality and violence that has wreaked havoc for Black and Brown communities across the U.S.

A strong anti-capitalist message was pushed, highlighting how the police exist to protect property, not people. Protesters discussed how, comparable to many cities across the country, Buffalo police are 69.3% white while policing a 47% white city, and most of these officers reside in neighboring suburbs, not the communities they occupy.

People shouted “abolish the police” and “no good cops in a racist system,” letting the public know that it is past time for reforms, and the whole system needs to be dismantled.

The group marched down Niagara Street through a predominantly working-class neighborhood with many community mental health centers and substance use services. This is important because those with mental illnesses make up a quarter of the people killed by police since 2015. In Buffalo in September 2020 Willie Henley, a man struggling with mental illness, was shot during a mental health crisis call and was charged with a felony for trying to defend himself with a bat as police surrounded him. These stories are repeated across the country.

Buffalo is looking to hold more demonstrations like this, demanding abolition and fighting against all forms of police violence.