Protests erupted in Portland April 12 following the police killing of Daunte Wright in Minnesota. They escalated four days later after police killed a homeless white man with a history of struggling with mental health issues. 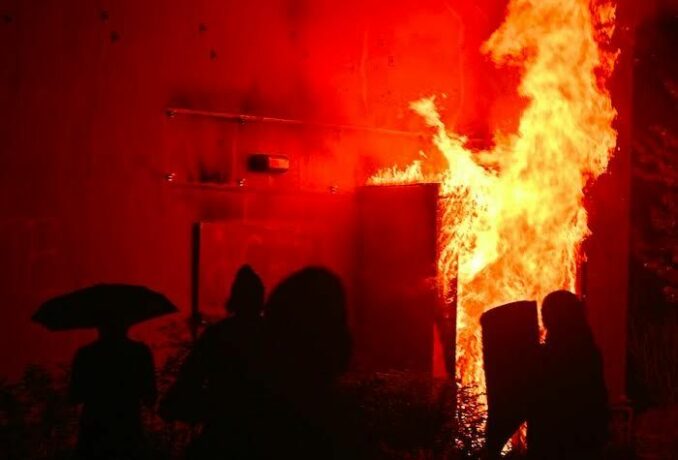 Over 100 protesters immediately responded to Wright’s murder. Calling for the abolition of police, they shattered windows and tore down light fixtures at the downtown offices of the Portland Police Bureau and Multnomah County Sheriff. The next night, they set fire to the North Lombard headquarters of the Portland Police Association, chanting: “Every city, every town, burn the precincts to the ground!” and “Say his name! Daunte Wright!”

Zakary DeLong, the cop who shot Delgado, has worked for the Portland Police Department for eight years. Before that he was a sniper in special operations with the U.S. Army Rangers in Afghanistan. DeLong was one of 19 Portland cops who “liked” another officer’s post reading “I am Darren Wilson,” referring to the Ferguson, Mo., cop who killed Michael Brown. (tinyurl.com/5db6eyt4)

Protesters attacked police vehicles and smashed windows of banks and businesses like Nordstrom and Nike. They started fires in dumpsters downtown and outside the Apple store. Another fire blocked the mass transit light rail. At times crowds of around 100 faced off with the police.

This week’s protests were an extension of Portland’s 100 days of protests beginning last May that were sparked by the lynching of George Floyd. One of their demands was the defunding or abolition of the Portland Police Bureau. In response to the demonstrations, Oregon state government leaders banned the choke hold and eliminated use of tear gas, except in the case of a “riot,” and cut $15,000 from the Portland Police Bureau.

A leading protester responded to these concessions in a video summarizing the effect of the demonstrations on Portland: “They threw us some bread crumbs with their first little attempt at defunding the police. It wasn’t what we asked for. We asked for $50 million a year until the whole system has been dismantled.” (tinyurl.com/524ndmrk)