On April 9, the Turkish officials announced to Russian counterparts that Washington, as it must by treaty, had informed them that in the following week the U.S. would send two warships to the Black Sea, which also borders Russia and Ukraine. This is part of the extended framework of tension that the U.S. has introduced in the region. Dinucci’s April 13 article in Il Manifesto (an Italian web newspaper) explains the framework of the growing crisis. Translation: John Catalinotto. 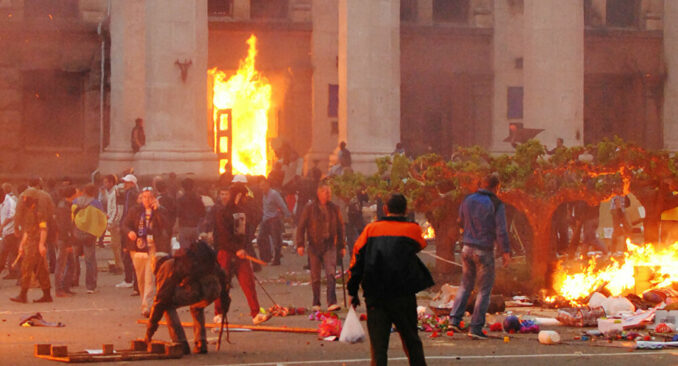 Ukraine’s neo-Nazis killed dozens of activists by burning down Trade Union House, May 2, 2014.

U.S. F-16 fighter jets, sent from the Aviano base, are engaged in “complex air operations” in Greece, where the Iniochos 21 exercise began April 12. They belong to the 510th Fighter Squadron stationed at Aviano, northern Italy, whose role is indicated by their emblem: the symbol of the atom, with three lightning bolts striking the earth, flanked by the imperial eagle. Thus they are nuclear attack aircraft, the ones used by the U.S. Air Force in Greece, which in 2020 conceded to the United States the use of all its military bases.

Also participating in Iniochos 21 are F-16 and F-15 fighter-bombers from Israel and the United Arab Emirates. The exercise takes place on the Aegean Sea close to the area that includes the Black Sea and Ukraine, where the massive exercise Defender-Europe 21 of the U.S. Army is concentrated.

These and other military maneuvers, which turn Europe into a big arms depot, increase tensions with Russia, especially regarding Ukraine. NATO, after having torn apart the Yugoslav Federation with international war actions in 1995 and 1999 to exacerbate Yugoslavia’s internal fractures, now sets itself up as the champion of Ukraine’s territorial integrity.

The chair of the NATO Military Committee, British Royal Air Force Chief Stuart Peach, while meeting in Kiev with Ukrainian President Vlodymyr Zelensky and Chief of Staff Ruslan Khomchak, declared that “NATO Allies are united in their condemnation of Russia’s illegal annexation of Crimea and its aggressive actions in eastern Ukraine.” (nato.int, April 7)

Peach thus repeated the false narrative that Russia forcibly annexed Crimea in 2014, while ignoring the fact that Crimean Russians decided in a referendum to secede from Ukraine and rejoin Russia to avoid being attacked by neo-Nazi battalions in Kiev, like the Russians in Donbass were.

The U.S. and anti-Russian Ukrainians used the same neo-Nazis in 2014 as a strike force in the Maidan Square putsch — which was triggered by Georgian snipers who fired on demonstrators and policemen. They were used also in subsequent actions: putting villages to fire and sword; burning alive dozens of activists in the Odessa Trade Unions House; massacring unarmed civilians in the city of Mariupol; and attacking in Donetsk and Lugansk, then-Ukrainian provinces, with white phosphorus bombs.

The Maidan action was a bloody coup under the direction of the U.S./NATO, with the strategic aim of provoking a new Cold War in Europe. The aim was to isolate Russia and strengthen, at the same time, the influence and military presence of the United States in Europe.

The conflict in the Donbass, whose populations are now self-organized in the Republics of Donetsk and Lugansk with their own popular militia, has gone through a period of relative truce with the opening of the Minsk talks for a peaceful solution. Now, however, the Ukrainian government has withdrawn from the talks, refusing to go to Minsk, using the pretext that Belarus is not a democratic country.

At the same time the Kiev forces have resumed armed attacks in the Donbass [Donetsk and Lugansk]. Chief of Staff Khomchak, whom Stuart Peach praised on behalf of NATO for his “commitment to a peaceful resolution of the conflict in eastern Ukraine,” said that the Kiev army “is preparing for the offensive in eastern Ukraine” and that in this operation “the participation of NATO allies is expected.”

It is no coincidence that the conflict in Donbass was rekindled when, under the Biden administration, Antony Blinken took office as secretary of state. His grandparents born in Ukraine, Blinken was the principal director of the Maidan Square putsch as deputy national security advisor in the Obama-Biden administration.

As deputy secretary of state, Biden appointed Victoria Nuland, who in 2014 was the assistant-director of the U.S. operation in the Maidan Square, costing more than $5 billion. She said this was to establish “good governance” in Ukraine.

It is possible that at this point the U.S. strategists have a plan: to promote an offensive of Kiev forces in the Donbass, effectively supported by NATO. Such an offensive would confront Moscow with a choice that would in any case be to Washington’s advantage: Either Moscow can allow the Russian populations of Donbass to be massacred or must intervene militarily in their support.

One plays with fire, and not figuratively speaking, by lighting the fuse of a bomb in the heart of Europe.