Greenland is the largest island in the world which is not a continent. Only it and Antarctica are covered by ice sheets. With 58,000 people, 89% of whom are Inuit, it remains a “semiautonomous region” under Danish rule whose main exports are fishery products and whose budget is heavily subsidized by Denmark. 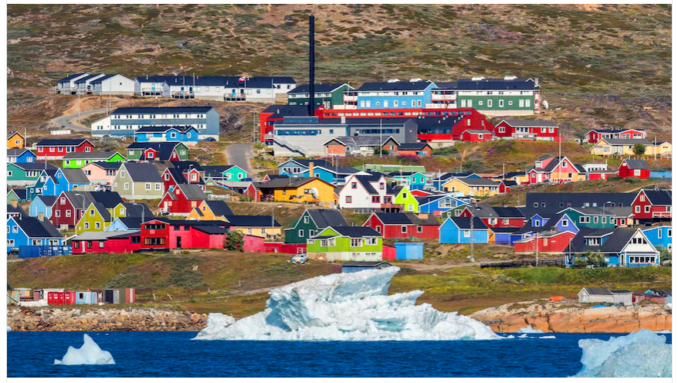 In Narsak, Greenland, the fishing village closest to the proposed mine, many people know radioactive dust from uranium would be dangerous.

The reason for such immense interest is the IA’s opposition to a mine for production of rare earth minerals at Kvanefjeld in southern Greenland. This mine would also produce uranium. This area has not been under the ice sheet.

Car manufacturers are hesitant to announce hundreds of billions of dollars of investments to make green vehicles, because the rare earths required might not be available. Renewable energy’s development depends on a variety of refined rare earth minerals essential for energy transmission and storage. Rare earth minerals are needed for production of electronics, including cell phones and flat-screen monitors, and weapons.

Chinese mines presently produce 70% of these rare earth minerals, and Chinese factories refine over 90% of the world’s supply. A mine in Myanmar is a major source for these Chinese factories. According to the April 11 Wall Street Journal, China has a technological advantage that will take billions of dollars and several years for the U.S. to catch up with. Competition over rare earths is a major theater in the U.S-China trade war.

In its campaign, IA has expressed reservations over the 45% projected increase in Greenland’s carbon emissions this mine would produce, the radioactive dust that would be released and the byproducts of rare earth processing. All this threatens the food — fish, seals, whales and musk oxen — that Greenlanders harvest, consume and export.

Pressure from the U.S. on Greenland

Over 50 years ago, a B52 bomber carrying four hydrogen bombs, in violation of Danish laws, crashed on the ice in a fjord near the Thule U.S. Air Force Base in far northwest Greenland. Most of the debris and three of the bombs were recovered; the fourth is still somewhere on the seafloor. And the memory of this nuclear accident is still alive in Greenland!

The Thule air base was opened in 1943 during World War II, when Germany was occupying Denmark. According to a U.S. Defense Department document, it was secretly expanded without public notice in 1950. It is the only U.S. military base north of the Arctic Circle; it is still used to track satellites and monitor shipping and Russian activity in the Arctic Ocean.

President Trump’s offer to “buy” Greenland from Denmark in 2019 was not completely off-the-wall. Former Secretary of State William Seward, who bought Alaska from Imperial Russia in 1867, made an offer for Greenland the same year. In 1910, the U.S. ambassador to Denmark followed suit. In 1946, under Harry Truman, yet another offer was made, and it appears that a semisecret deal for the U.S. to “defend” Greenland was reached during the Cold War. Denmark has some sort of deal with Canada allowing Danish and Canadian helicopters to use the same airfield on Amassilik Island in eastern Greenland.

Given Greenland’s strategic position in the Arctic and North Atlantic for Western imperialism and its treasure trove of rare earth minerals, it’s easy to understand why the capitalist press would closely follow elections in a big island with a small, mostly Indigenous population.