Jeff Bezos of Amazon may be “stepping down” from his position as CEO, intending to “stay engaged” behind the scenes, but he has set his sights on grabbing infinitely more billions for himself in space. 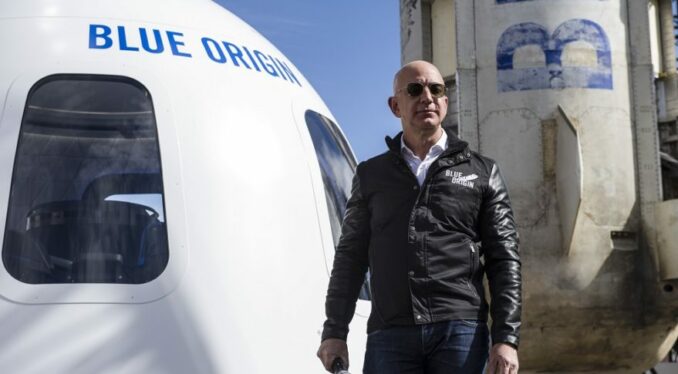 Bezos standing next to a Blue Origin space vehicle.

Lest we forget, Bezos is the founder of Blue Origin, whose stated goal is to build reusable rockets for transporting people and payloads into space — ultimately for colonizing the solar system (tinyurl.com/87yf8cp7). In the meantime, his company invites the very well-heeled to reserve a window seat for an 11-minute “unparalleled view of the earth from space.”

As discussed in the Workers World article “Astronomical imperialism!” (workers.org/2019/10/43849/), capitalist ventures are aiming to mine space for precious metals, including iron, nickel, gold, cobalt and platinum, plus a potential hugely profitable source of energy from the moon: helium-3, valued at an estimated $5 billion a ton. Bezos intends to market his space vehicles for these ventures.

In competition with other multi-billionaires, including Tesla’s Elon Musk, Bezos with his Blue Origin is perfecting reusable space transport vehicles launched from U.S. military locations, such as Cape Canaveral Air Force Station. His Project Kiper is sending into low orbit around Earth thousands of satellites, which he claims are designed to bring low-cost broadband internet capability to the poor and those in remote areas of the planet.

However, this project is really aimed at bringing more business to his online Amazon monolith. Moreover, the satellite clusters prevent telescopes from peering into an unencumbered sky, to the dismay of professional and amateur astronomers – a contradiction, because not all observatory work is devoted to “pure science.” Research also targets asteroids and the solar system (with starry-eyed scenarios of eventually travelling beyond it) for future mining and colonization, using space vehicles built by Bezos and others.

Blue Origin’s website is recruiting workers for these projects with lofty phrases: “We’re looking for people who share that passion and want to turn their career into a calling. We’re shaping our future in space and we’re looking for dedicated and inspired people to join us.” Its internship program offers opportunities to participate in “real engineering projects” for “human spaceflight systems.” The company envisions “a future where millions of people are living and working in space. In order to preserve Earth, our home, for our grandchildren’s grandchildren, we must go to space to tap its unlimited resources and energy” (blueorigin.com).

In addition, Blue Origin is targeting youngsters with well-developed educational programs for K-12 schools, providing tantalizing projects to stimulate and motivate them to visualize romantic adventures in outer space exploration and colonization. (clubforfuture.org/curriculum) Its website links to NASA’s Project Ianos, whose mission is “to engage and educate students with the wonders of space and to inspire them to become explorers of it.” (www.projectianos.org) This is the next generation of exploited and endangered workers.

As Amazon workers struggle to unionize here on Earth, we must not forget that capitalist Bezos and other multi-billionaires never have enough. Not satisfied with having built the biggest monolith on earth, Bezos aims to expand his avaricious reach, as Star Trek’s captains boast, “to boldly go where no one has gone before.”

Janet Mayes, an amateur astronomer, authored a science fiction novel about U.S. hegemony in space, “Beyond the Horse’s Eye, a Fantasy Out of Time,” under the pen name Janet Rose. A review can be found at tinyurl.com/y6fzefun.