The fight of Amazon workers for union rights has just begun!
Union busting is disgusting. It can be stopped!

Sign this message to Joe Biden and raise this demand at protests and rallies. Act now to defend Workers’ Right to Organize! 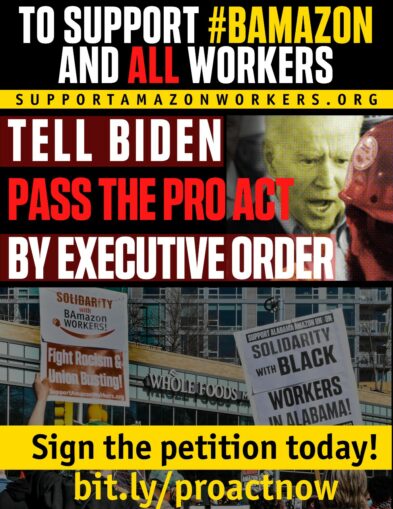 The PRO Act — Protecting the Right to Organize Act — shields workers seeking to form a union from retribution or firing, strengthening the government’s power to punish employers who violate workers’ rights. It outlaws mandatory meetings that employers often use to try to quash an organizing drive. Workers need the protection of the PRO Act now.

The PRO Act will make it harder for companies like Amazon, Uber, Lyft and other huge corporations to classify millions of gig workers as independent contractors. This expands the pool of workers eligible to unionize.

The PRO Act overturns provisions of the odious 1947 Taft-Hartley Act, which for almost 75 years has helped bosses bust unions and break strikes. The PRO Act would allow secondary strikes and boycotts. The PRO Act weakens misnamed state “right-to-work” laws by allowing unions to charge a representation fee to workers who opt out of union membership.

But the PRO Act has to run into a brick wall of opposition in the Senate, where 60 votes are needed to pass filibuster. Shelving the essential labor protection because it won’t pass the Senate is NOT the only way forward.

President Biden can issue an executive order to activate the basic labor protections in the PRO Act. Moreover, Biden can go even further in securing union rights. How? One, by making union recognition by “card check” mandatory, eliminating the need for an National Labor Relations Board election — a process that gives bosses undue influence in the outcome of the vote. Two, by repealing Taft-Hartley altogether.

Biden has already issued 38 executive orders in the last 10 weeks.

Biden pledged to be “the strongest labor president you have ever had” during his candidacy, and the PRO Act was a cornerstone of his election platform.

We call on President Biden to use his authority to protect workers’ right to organize.