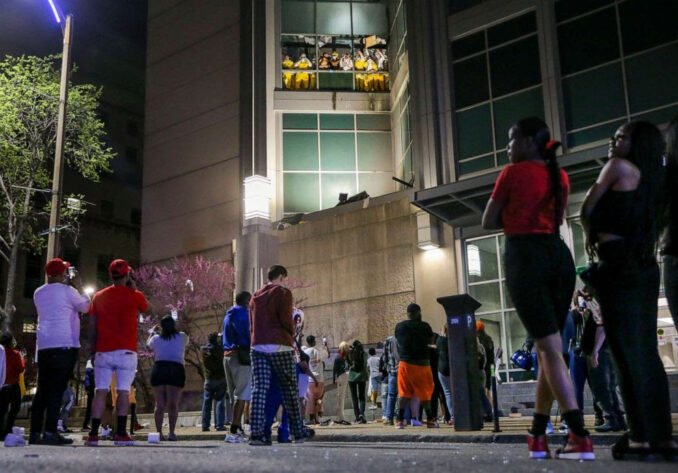 Two separate groups smashed out windows in different areas and displayed messages like “Help Us.” People could be heard chanting: “We want court dates!”

The majority of people held in city jails like this one are in pretrial status, without having been convicted of any crime. They are trapped inside for years and exposed to medical neglect and COVID while awaiting trial.

The city’s response to these brave people asking for life was to hire more guards, rather than to change the deadly conditions that have generated consistent resistance. Response to previous rebellions against inhumane conditions was to create yet another toothless advisory task force with little ability to change conditions, but which simply repeated more of what was already known.

Meanwhile, racism in policing and the courts continues. For instance, in St. Louis City jails, Black residents are held in pretrial detention three times as often as white residents, according to the “Court Reform” section of a recent St. Louis City Department of Corrections and American Community Survey. This data reflects U.S. trends as well. (tinyurl.com/yc5m8xun)

And what’s more, local governments in the U.S. — which serve capital and those who hoard wealth — spend around $13.6 billion each year on pretrial detention.  On any given day, 555,000 people are locked up and have not been convicted of anything. Some of these people are arrested for a few hours or days and have not yet been brought before a judge. Others are too poor to afford money bail and end up waiting for trial for years. (Prison Policy Initiative, March 24)

The disproportionate effect of the “injustice system” on people who have been continuously assaulted by colonialism and capitalism happens because prisons, jails and detention centers are built to incarcerate oppressed groups of people within the U.S., in order to serve those amassing wealth off the plunder of the entire world.

Prisons, jails and detention centers — both before and especially during COVID — guarantee a likelihood of premature death to people whom a racist, sexist society deems unfit. Thus are perpetuated extreme inequality and suffering for the many to the benefit of the few. Abolish the conditions that make prisons necessary.  Tear down the walls!

Death of an incarcerated Oklahoma worker

Conditions at Oklahoma County Detention Center were so bad — as in many prisons, jails and detention centers — that one of the prisoners allegedly took a guard hostage during a medicine distribution March 27. That incarcerated member of our collective class, the working class, was named Curtis Montrell Williams. He was shot and killed by a guard. His death was livestreamed as a spectacle to social media by guards Lt. Coy Gilbert and Officer Kevin Kulman. (https://tinyurl.com/4dk3uhzx)

Curtis Montrell Williams was one among many in the jail complaining that there was no running water and that they weren’t being fed. Other conditions, like bedbugs and roaches in overcrowded cells, have been common complaints about the facility for years. (NY Post, April 5)

Curtis’ mother, Rhonda Lambert, said the conditions at the jail caused her son severe mental anguish and were responsible for prompting him to lose control. The incident with Williams was the latest in a string of deaths at the jail, which was seized from the inhumane custody of the local sheriff’s office in July by the newly formed Oklahoma County Jail Trust. Five incarcerated people have been killed at the jail in 2021, including Williams. (Oklahoman, March 29)

Prisons, jails and detention centers precipitate more violence than they supposedly protect the people outside from. There have been countless uprisings in these facilities across the world and over time, with one of the largest clusters of recorded prison uprisings in recent history happening as the COVID pandemic compounds misery in these concentration camps for the poor and the oppressed.

Prisons, jails and detention centers have been built as powerful tools of isolation. But as the movement for abolition continues to heat up inside the walls — given the unabated inhumane conditions incapable of being reformed — it’s only a matter of time before the struggles of incarcerated members of our class inside and the struggles of solidarity supporters outside are networked together.