The month of March saw a number of demonstrations throughout North America in solidarity with the struggles of the working people of Haiti for justice, democracy and an end to U.S. interference in its internal affairs.

Members of the Haitian diaspora along with their international allies held rallies in cities including New York; Boston; Washington, D.C.; Atlanta; Miami; San Juan, Puerto Rico; Montreal and Ottawa, Canada, in solidarity with the ongoing uprising in Haiti.

Black Alliance for Peace (BAP) held protests across the U.S. March 28 and 29 in coordination with huge protests that took place in Port-au-Prince and throughout Haiti on those days. (See Twitter video linked to @Blacks4Peace.)

The Washington, D.C., rally was at the State Department, which was called out by BAP as “instrumental in spreading misinformation and manipulating Haitian elections in order to keep right-wing regimes in office in Haiti.”

The Chicago rally was held in front of the Haitian Consulate. In a statement of support, BAP emphasized that it was acting in solidarity with the Haitian masses. Haiti is “the first Black republic that has fought for decades against the white-supremacist dominance of the United States.” 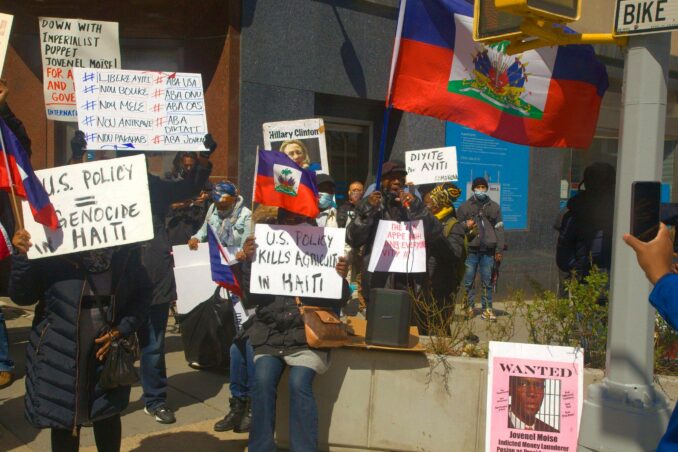 In New York City, Komokoda (Committee to Mobilize Against Dictatorship in Haiti) joined with BAP to hold a militant and lively demonstration at the U.N., directly across the street from the U.S. Mission. Speakers — in both Creole and English — denounced Jovenel Moïse as a U.S.-imposed president who is maneuvering to become a dictator. One speaker condemned the U.S., the U.N., the Organization of American States, the European Union and the Core Group for interfering in Haiti’s internal affairs. The Core Group is composed of the ambassadors of France, Germany, Spain, Brazil, Canada, the U.S., the European Union and special representatives of the OAS and the U.N.

Some speakers at the New York rally called for a revolution; others condemned the attacks on women and the U.S. abuse of refugees.

In Puerto Rico, Comuna Caribe and other progressive Puerto Rican groups demonstrated in front of the U.S. Federal Building in San Juan in solidarity with the Haitian people and to demand that “the U.N. and OAS get their hands off Haiti.” (Twitter @AgencyINS)

A few days earlier, a coalition of progressive groups in San Francisco joined the Haiti Action Committee to hold a Day of Solidarity With Haiti March 18. (tinyurl.com/vnm9vd6c)

Solidarité Québec-Haïti celebrated the International Day for the Elimination of Racial Discrimination March 20 by organizing a demonstration at an office of the Minister of Foreign Affairs to denounce Canada’s support for the dictatorship of Jovenel Moïse. (tinyurl.com/kcnwwxza)