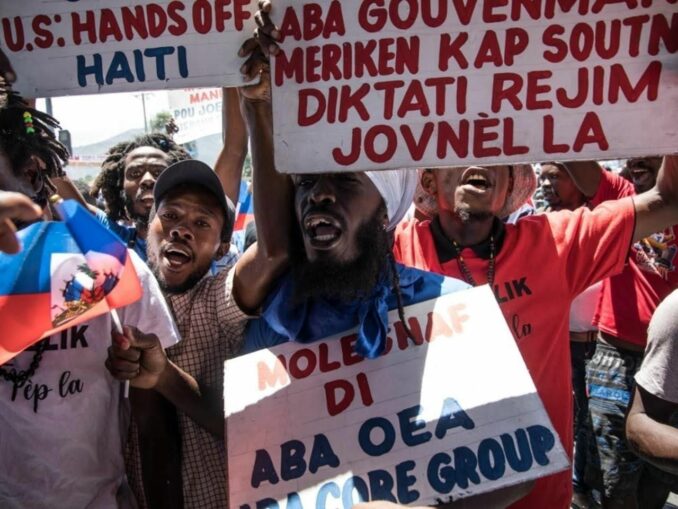 March 29 marked 34 years since the Haitian constitution of 1987 — marking the end of the Duvalierist dictatorship — was adopted. Two massive demonstrations on March 28 and 29 — not just in Port-au-Prince, but in Saint-Marc, Cap-Haïtien and Port-de-Paix — were held to defend this constitution.

These were the first major demonstrations in Haiti since March 12, when a group of people ambushed a cop patrol, killing four cops and injuring eight.

Jovenel Moïse was elected president six years ago with less than 10% of the vote but the firm support of the United States. By law he should have left office one year ago, but is instead promoting a referendum on a new constitution that would allow him to run for another consecutive term and permit a foreign citizen to be president of Haiti.

Under Moïse’s leadership, the country has seen a massive increase in violence, with rapes and kidnappings becoming more frequent. The economy has collapsed. Hunger is a serious and growing problem for the working class, a majority of whom — as much as 80% — live on less than $2 per day. That is not enough to feed one person, let alone a family.

While the masses in Haiti are desperately poor, a handful of big bourgeoisie, the lackeys of the big imperialists who control Haiti, manage to siphon off bits and pieces of the vast wealth that has been and is being extracted. They live in splendiferous luxury.

The first day of demonstrations was under the inspiration of the Protestant churches and “civil society” — nurses, teachers, people with steady jobs — and drew an immense crowd to say “No” to Jovenel Moïse. Two progressive political parties, Fanmi Lavalas, founded by former President Jean Bertrand Aristide and currently led by Maryse Narcisse, and Petit Desalin, also known as Ti Desalin (Dessalines’ Kids), were prominent in this march.

Moïse Jean-Charles, the political leader of Ti Desalin, gave the wrap-up speech at the Champ-de-Mars in Port-au-Prince. He said: “We are in the streets because there is a dictator in the National Palace who is planning to change our constitution for the benefit of the system, for the benefit of the bourgeoisie and the embassies of imperialist countries. We are not going to give up; we will continue the mobilization until Jovenel Moïse leaves power.” (tinyurl.com/yzpvvfkw)

‘Down with the United States’ 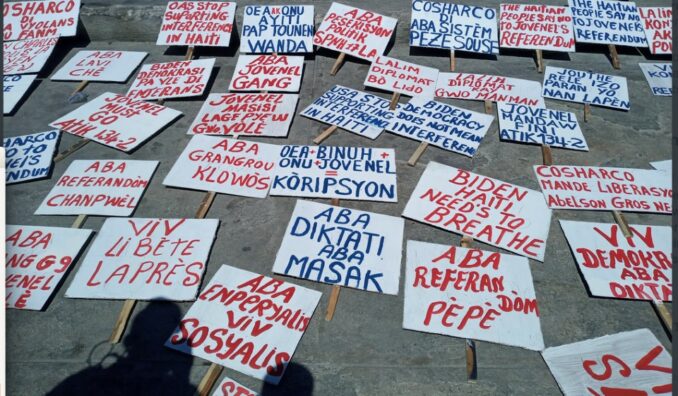 The second day of protests had much the same spirit as the first, but the signs and banners were more political. Slogans included “Jovenel Moïse terrorist,” “Down with the United States, Long Live Russia,” “The U.N. + PHTK + OAS = misery” and “Long live a socialist Haiti!” PHTK is the Party of Tet Kale, which currently runs the government.

People in both marches made a point of tearing down the government’s signs promoting the referendum on the proposed new constitution.

The only explanation for Moïse remaining in power is the firm, unwavering support of the United States.

The Biden administration has rejected Trump’s crude approach toward Haiti and other poor countries. But its determination to keep Black Haitian people out of the U.S. is just as strong. On March 25, the U.S. embassy in Port-au-Prince tweeted “Mwen ka di sa byen klè: pa vini” over a picture of Biden; in essence, the embassy quoted President Biden: “I can say very clearly: don’t come.” Using Creole makes the position of the United States abundantly clear — stay away.

While Washington disdainfully wants Haitians to stay out of the U.S., it has no intention of releasing its claws from Haiti.