On April 1, the United Mine Workers of America announced that more than 1,100 workers at the Brookwood, Ala., locations of Warrior Met Coal (WMC) had gone out on strike and were walking the picket line. The strike involves workers at two mines, one preparation plant and Central Shop. 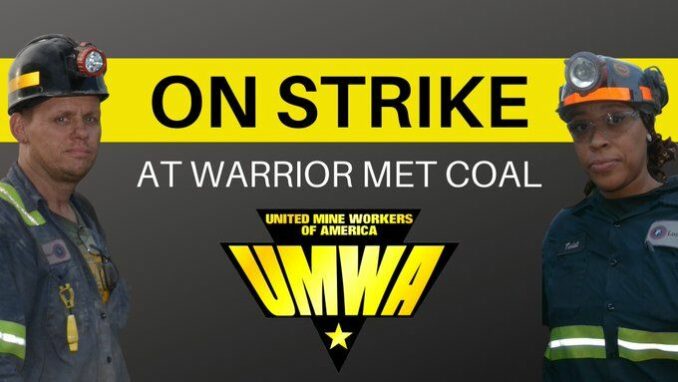 The BAmazon campaign focused international attention on the majority Black Alabama workers going up against the second-largest employer in the U.S. The spark of those workers appears to be igniting a new defiance in worker actions.

Now the UMWA strike in Alabama is ramping up even more pressure on global capitalism, with determined miners who are rooted in a long tradition of union actions in the state. (See Workers World, “Lessons of ‘The Hammer and the Hoe,’” Dec. 21, 2017.)

S&P Global/Platts noted that Warrior Met’s inventory of coking coal, used in steel production, is currently very low. Inventory dropped 7.2% in 2020 due to weaker demand after the COVID-19 pandemic began, and then fell sharply after the beginning of 2021.  (https://tinyurl.com/38bewj36)

The workers have taken action just as demand is quickly rising from Warrior Met customers, which include steel producers in Europe and Asia, particularly China – demands the company will be pressed to meet during a strike.

The strike’s impact will be felt within the state as well, since metallurgical coal, shipped out of the port of Mobile, accounts for 50% of revenue generated by the Alabama State Port Authority.

A 2001 methane gas explosion at Walter Energy, a coal mining company headquartered in Birmingham, had killed 13 miners as a result of inadequate safety measures. In 2016, Walter Energy went bankrupt and was acquired by Warrior Met.

Under Warrior Met ownership, miners have worked tirelessly to lift the company out of bankruptcy.

UMWA International President Cecil T. Roberts said: “Warrior Met has capitalized on their hard work, earning tens of millions in profits for their Wall Street owners. They have even rewarded upper management with bonuses of up to $35,000 in recent weeks.” (umwa.org)

As a response to WMC exploitation, the UMWA has filed unfair labor practice charges with the National Labor Relations Board, particularly concerning WMC’s conduct during bargaining and negotiations that caused turmoil and hardship for the workers.

UMWA’s Roberts commented: “Instead of rewarding the sacrifices and work of the miners, Warrior Met is seeking even further sacrifices from them, while demonstrating perhaps some of the worst labor-management relations we’ve seen in this industry since the days of the company town and company store.”

During the strike, UMWA dues-paying members who participate in picket line or other strike duty will receive strike assistance payments from the union, which is arranging for health care coverage for members and their families for the duration of the strike.

WMC’s refusal to treat its workers fairly, while continuing to line the pockets of the bosses, highlights the ongoing labor struggles not just in mining, but in other industries across the world.

Statements of support are beginning to pour in from other unions, including the RWDSU, Association of Flight Attendants-CWA, Airline Pilots Association, Machinists Union, and the AFL-CIO, which tweeted: “The entire labor movement stands with Striking @MineWorkers at Warrior Met #1u.”

From mining to retail, from warehouse to grad students, one truth is this: Workers make the world, so workers should run the world!
All power to the mine workers in Alabama!  Solidarity from Workers World Party!

Go to tinyurl.com/4a6dbf6s for the full statement of the United Mine Workers.