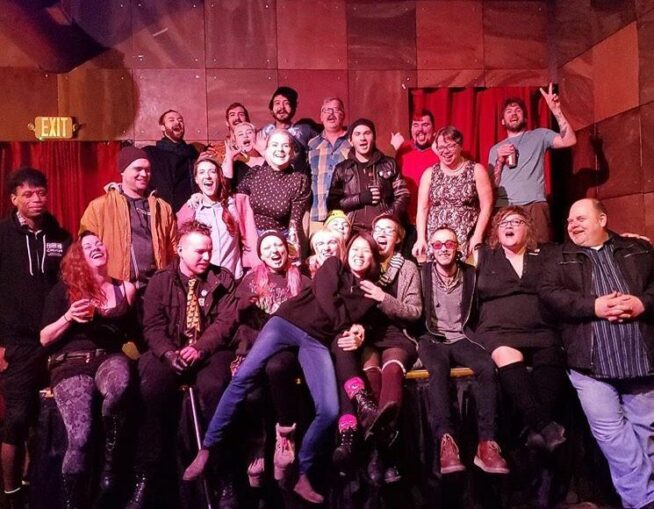 March 17 marked the one-year anniversary of the historic sit-in of 27 fired Crush Bar Workers Collective members at Crush Bar, a queer bar, and at Woody’s, an adjacent eatery owned by the same petty capitalist. (tinyurl.com/3cbpxzjv)

In March 2020 both establishments were closed due to the COVID-19 pandemic, the workers fired and provided with no benefits. The workers demanded accrued sick-time payouts, half pay for scheduled hours and a rehire plan. The owner had all the workers arrested and carried out of the bar and eatery by the notorious Portland police. But in the end they won their demands!

The CBWC remains strong a year later. Following the mass layoff, the union provided benefits including food boxes and funds from their GoFundMe account on a needs basis. In July 2020, workers filed Unfair Labor Practice claims with a National Labor Relations Board appointed by Trump. With Biden’s newly appointed labor board, they are more optimistic about getting a fair claims hearing.

The workers gained community support through picket lines and social media, on which they posted: “[We] avoided centering our organizing around the loud, demanding white men who attempt to police how the oppressed go about their liberation. As workers re-entering this workplace [we have] a strong conviction to continue our struggle for positive change, [which] puts us in a frighteningly precarious position, but nonetheless we’re hopeful. After all, look at how much we’ve already accomplished!”

On March 25, after a long hard struggle, Doughnut Workers United, a local Portland union, secured the right to vote for a union at the Old Town store of the Voodoo Doughnuts national chain. The right to an election for union representation is granted only by the NLRB.

As soon as the victory came, the company began its union-busting tactics by hiring five new workers, rather than bring back workers who had lost their jobs due to the COVID-19 shutdown. (tinyurl.com/4dfpknd5)

The company is punishing workers through arbitrary shift/hours limitations.

Since the March 2020 shutdown and layoffs, the DWU has provided, through its GoFundMe Strike and Hardship account, union benefits for workers in need including alternative housing, food boxes and fresh water during last September’s wildfires.

Before Oregon banned eviction, the union provided cash stipends to laid-off members for rent. The union is still providing these benefits to members not rehired and for those having their hours cut as an anti-union tactic.