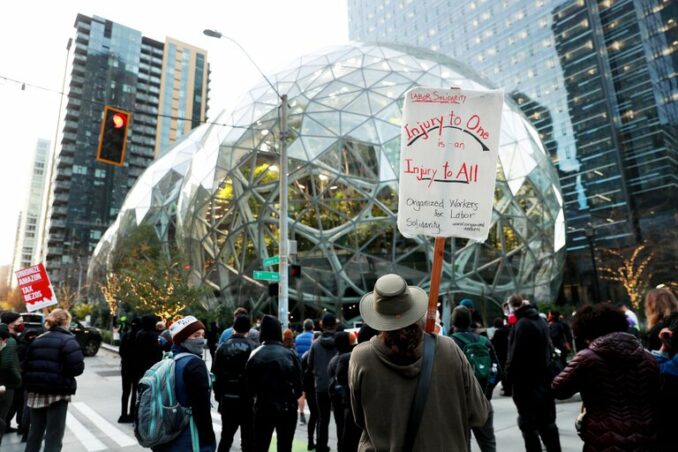 The rally to “Support the Alabama Amazon Workers” was held here March 26 to boost the homestretch drive for a union by Bessemer, Ala., warehouse workers. There was a national surge of 53 support demonstrations March 20, along with worker strikes breaking out at Amazon hubs in Europe. There is optimism that the workers’ resilience in Bessemer has defeated all of Amazon’s anti-union tactics. But whatever the outcome of the union election vote, it’s believed that a higher stage in union organizing has been achieved.

In Seattle, more than a hundred solidarity workers came together to rally at Amazon Spheres, the company’s international headquarters. The rally, organized by the Democratic Socialists of America, was called off the week before after

Seattle’s Democratic Mayor Jenny Durkan demanded its cancellation. She was likely acting under the pressure of Seattle property owner, Amazon.

The March 20 rally was held anyhow, in defiance, with 40 people. The second rally March 26 pulled much more support. Many unions and rank-and-file labor organizations, such as the Seattle Education Association and UAW Local 4121, attended, along with anti-racist police brutality groups.

Speaker Nikkita Oliver, a city council candidate, spoke representing Decriminalize Seattle. They said the struggle of the Bessemer workers to be represented by the Retail, Warehouse and Department Store Union could change the landscape for the equal rights of workers, just like the struggle of the Memphis, Tenn., sanitation workers over 50 years ago. Gabriel Prawl, former president of International Longshore and Warehouse Union, Local 52, spoke in support of the PRO Act — the Protect Union Rights to Organize Act — now introduced into Congress.

After the rally the crowd marched at rush hour through the “Amazon Empire,” a huge group of gleaming office towers with some AmazonGo stores on the street level. Marchers chanted: “I don’t know, but I’ve been told; Bezos’ pockets are lined with gold,” before ending at Amazon’s Whole Foods for a closing rally.