It has been five years since the assassination of Berta Cáceres — an environmental activist from the Lenca people, a founder and leader of the Council of Indigenous and Popular Organizations of Honduras. Though some of her killers have been identified and convicted, the governments and corporations that hired and trained them remain unpunished. 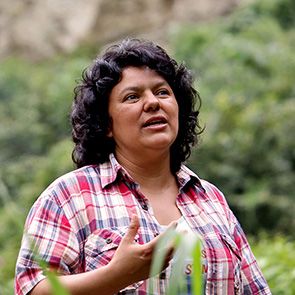 They murdered Cáceres during a campaign to stop the construction of a hydroelectric dam funded by a corporation called Desarrollos Energéticos SA (Desa). Desa’s security chief was among the seven men convicted for her assassination. This killer, a former Honduran army lieutenant, along with one of his co-conspirators, received U.S. military training.

At the time of the killers’ arrest, the Guardian reported that the Cáceres hit was “an extrajudicial killing planned by military intelligence specialists linked to the country’s U.S.-trained special forces.”

“Those who were captured and convicted were the weakest people within the criminal structure that attacked my mom,” Cáceres’ daughter, Laura Zúñiga Cáceres, said last year. (Democracy Now, Jan. 17, 2020)

Workers World reported on Dec. 4, 2018: “The close relationship among international finance capital, the Honduran military and local companies keeps wages and costs low and enables a transfer of the ‘savings’ back to Europe and the U.S. as profit. Local oligarchs and foreign bankers get rich, while the working masses are faced with the choice of suffering at home or risking their lives to migrate to the U.S.”

The coup government, headed by Roberto Micheletti, immediately directed violent repression at opposition groups and former members of Zelaya’s government. It harassed and assaulted diplomats from Venezuela and Cuba and drove many left-wing politicians into exile or hiding. Washington then funneled over $43 million to the Honduran coup government, according to USAID, mostly allocated through the Department of Defense.

Emails obtained by Wikileaks show the U.S. State Department covered for the coup government, protecting it from the country’s own neighbors. “Clinton and her team worked behind the scenes to fend off efforts by neighboring democracies through the Organization of American States to restore the elected president to power. ‘The OAS meeting today turned into a nonevent — just as we hoped,’ wrote one top State official, celebrating a strategy of slow-walking a restoration.” (tinyurl.com/fjbc4bze)

Secretary Clinton’s own memoir originally admitted, “We strategized on a plan to restore order in Honduras … which would render the question of Zelaya moot.” This section was removed from later printings of the book.

Thousands of the migrants who took the long journey to the U.S. border fled the violence caused by the 2009 coup, only to end up deported or separated from their children and held in cages built for them by the Obama-Biden administration. One year before Obama turned the reins over to Donald Trump, on March 2, 2016, a squad of U.S.-trained, corporate killers-for-hire assassinated Berta Cáceres.

But there is now mounting pressure to stop U.S. collaboration with the coup government. Five U.S. Congressional representatives have proposed the Berta Cáceres Human Rights in Honduras Act, which if passed would purportedly cut off U.S. funding sources for Honduran security forces, “unless the Honduran government investigates and prosecutes blatant human rights violations by their police and military forces.” (tinyurl.com/3jre5xen)

It is unclear if this act would curb the violence committed against workers and Indigenous communities or whether it would only serve as a form of sanctions to further starve and terrorize the Honduran people. And it is unclear if the Biden administration would comply with the act even if it did pass Congress.

Now Secretary of State Antony Blinken was Vice President Biden’s National Security Advisor from 2009 to 2013, during which time the U.S. gave the coup government over $350 million in aid.

Current President Juan Orlando Hernández, a deeply unpopular figure inside Honduras who has faced tremendous backlash from the working class, is the subject of an ongoing corruption investigation due to his collaboration with drug traffickers. Still, President Biden has so far retained friendly ties with Hernández.