The following remarks were given at a March 20 Harlem, N.Y., rally in solidarity with Amazon workers who are organizing a union in Bessemer, Ala.

My name is Clarissa Hernandez and I’m with the Workers Assembly Against Racism –  WAAR!

Everyone should know that we owe most major progress we have made in this country to Black revolutionaries. 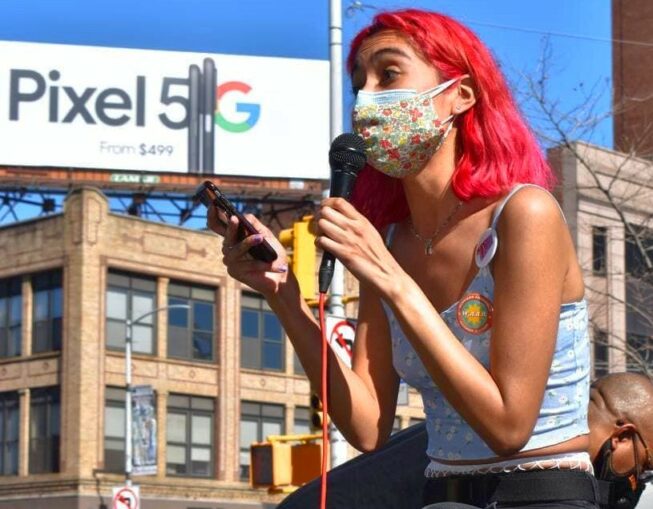 This continues to be true today, as we can see in Bessemer, Alabama, in one of the largest Amazon warehouses in the U.S., which is primarily staffed by Black workers [a large percentage of them women].

The United States went ahead and declared March to be Women’s History Month back in 1987 and here we see women making history! This union is making history.

Amazon’s monolith is what happens under unchecked capitalism! Capitalism and Amazon want us to believe $15 an hour is a fair wage to be on your feet ten hours straight, to be at risk of termination if you need to use the bathroom, to work in an unclean facility during a global pandemic. You go home after 10-11 hours and every part of you aches. For $15 an hour.

Yes $15 an hour is too low, but I can’t imagine a wage high enough to justify the abuse warehouse workers face. This abuse happens in warehouses and distribution centers all over the country because capitalism sees us as the capital and this mode of oppression is happy to sacrifice people for the sake of upholding itself.

These women workers in Bessemer, Alabama, are fighting against the capitalist ransom of their happiness and health and paving the way for other warehouse workers to fight back against this injustice because we all deserve to be happy and healthy.

Amazon would rather pay a union-busting law firm $10,000 a day than pay workers what they deserve. Isn’t it sick? They have the money, they’re just choosing to spend it on themselves and their bourgeois interests.

Humans are not capital, we’re not — we are so much more than our labor contributions. Under this sick capitalist system, however, we can use our labor to make demands.

We can take note of the work the women in Bessemer are doing. You don’t spend $10,000 a day unless you’re terrified — and trust me, Bezos, CEOs, the gatekeepers of wealth and security should be terrified because this labor movement is so powerful and this is only the beginning.