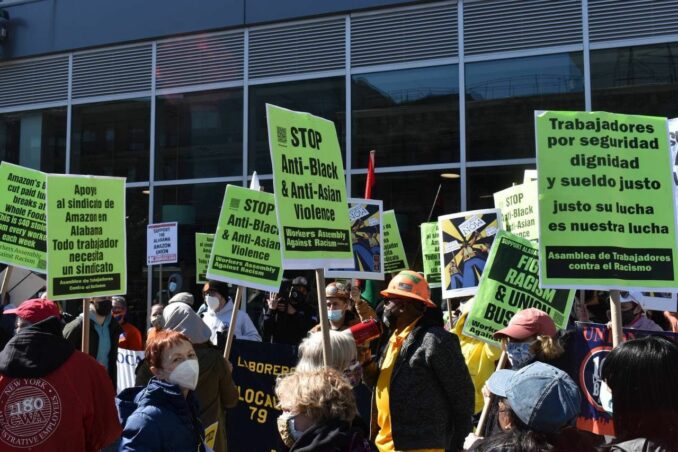 “Hate is hate. White supremacy is white supremacy,” the California Labor Federation tweeted. “Calling it anything else just perpetuates the structural racism that puts far too many workers at grave risk every day. Just for trying to earn a living.”

“The fact that these women were targeted at their jobs speaks to the misogyny and systemic, racist attacks Asian Americans are increasingly facing every day,” tweeted AFL-CIO Secretary-Treasurer Liz Shuler. Federation President Rich Trumka said the murders “reinforce that we all must continue to fight against anti-Asian racism in all forms.”

Other unions called on members to take action. “To dismantle white supremacy, we must do what the labor movement exists to do — and that is to show up, organize, and build the infrastructure to ensure our siblings and community members are protected,” UNITE HERE President D. Taylor said March 17. (tinyurl.com/yglqgn4a)

“As union members and activists, we have the responsibility to prevent the spread of violence and hate and stand in solidarity with Asian American communities. As we mourn those who were lost to violence, we continue our efforts to build an anti-racist union so that we can stand united against the true enemies of the working class,” stated the Communication Workers (CWA) March 18. (tinyurl.com/ye7y438f)

It is very important for unions to unequivocally condemn white supremacy and misogyny — and anti-LGBTQ2S+ bigotry, ableism, xenophobia and Islamophobia — by name. It means challenging their own union members who display prejudice and bigotry against oppressed workers — and pushing back against the bosses who use hatred to divide the working class.

But unions need to go further and actually organize their members to defend working-class communities who are the targets of hate crimes.