It’s just two and a half months into 2021, and already over 25 blatantly anti-trans bills have been introduced in 28 state legislatures. In total, 91 bills are proposed in those states that, in some way, shape or form, attack trans people — some directly, some indirectly, but the destructive impact is the same. (tinyurl.com/ydoma9t9) 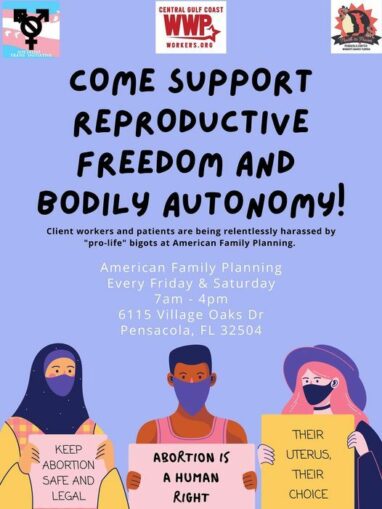 In other legislation affecting women and gender-nonconforming people, 45 states have enacted 256 laws relating to abortion between January 2017 and November 2020. Of these laws, 88.7% restrict access to abortion services — from funding constraints and restrictions for physicians to waiting periods for patients and gestational limits. Some would trigger a complete ban on abortions if Roe v. Wade is overturned. South Carolina’s “heartbeat” abortion ban Feb. 18 was the first restrictive state abortion law passed in 2021. (tinyurl.com/y99aekvn)

In Mississippi, bill SB2536, banning all transgender athletes from participation in sports, was signed by reactionary Governor Tate Reeves March 11, becoming the first of the new anti-trans bills to become law. Mississippi LGBTQ+ organizers are working to get the heinous law overruled.

If we follow the history of anti-trans legislation over the last five years — much eventually being overruled in court — we can expect that SB2536 will be similarly invalidated. The reactionary politicians know this, yet continue to push these bills through at alarmingly high rates, most of them targeting trans youth.

And the attack on trans lives is paralleled by the continuing and increased attack on women’s lives as well.

To take effective action against this double attack requires a critical analysis of biological determinism, a weapon used time and time again by the ruling class to perpetuate racism, sexism and now anti-trans oppression. Action requires a dialectical, historical approach to the question of trans people, trans liberation and women’s liberation.

The notion of biological determinism has been around in Western philosophy and science for centuries. And those of us living now have experienced the punishment from its ideas. This usually starts out when we are children: Boys have to act tough, repress “sensitive emotions” and establish a persona of male domination. Girls are required to be quiet, sensitive and expected to be accommodating to the daunting “superiority” of boys. This is the unquestioned premise that persists throughout the lives of boys and girls as they grow up into men and women.

Biological determinism has been used to justify enslavement of African peoples, with such outrageously racist false sciences as  “phrenology,” which claimed that Black people were intellectually inferior. When women mobilized for the right to vote, this false science was once again used to claim that women were intellectually inferior to men and thus unable to make political decisions on their own behalf.

Marxist dialectical science and history informs us that biological determinism is nonsensical, racist and sexist. But this reactionary idea now underlies the anti-transgender views of the reactionary camp.

The current anti-trans bills, put forward mainly by Republican legislators, rely on the discredited ideas of biological determinism. In Florida, to justify anti-trans bills that target trans youth, reactionaries argue that “biological sex is immutable science” and that “a boy is a boy and a girl is a girl based on biology.” This argument using false science is, of course, coming from the same bourgeois party that denies both climate change and the science used to contain the current COVID pandemic.

Meanwhile, right wingers push the lying idea that trans youth will somehow harm girls, while denying the fact that trans children and youth are being bullied, threatened and harmed because they do not fit masculinist norms.

Trans liberation and women’s liberation
Trans and gender-variant people turn biological determinism on its head and drive another nail deeper into the coffin of capitalism-imperialism. The main concern of the Republican reactionaries and the entire ruling class is that the rise of transgender and gender-variant people could uproot the entire social division of labor based on sex, as well as rigid, violent gender roles.

This challenge to biological determinism is an extension of the challenge that the women’s liberation movement has made to the social division of labor and its gender roles and to the patriarchal and violent exploitation of women. Transgender liberation carries this upheaval further and deeper.
The same violent, patriarchal, exploitative system that oppresses cisgender women also oppresses trans women and all other trans people. It is up to all of us, united, to continue to destroy the rigid confines of anti-woman and anti-transgender rhetoric and legal weaponry.

What action do we take?

Thanks to the waves of women’s liberation, LGBTQ+ liberation and now trans liberation, trans people are more visible now than ever. With the rise of this visibility has come incredible resources that educate people of all ages, particularly youth, about sex and gender variation. That means that many are able to realize at young ages that they are trans and can get the support they need.

But with visibility has come wave after wave of violence. More alarming than the new crop of anti-trans bills are the eight trans people who have been murdered already in 2021. Most of those killed have been Black trans women, one of whom died in Jackson, Miss., where anti-trans SB2536 was signed into law.

It is not just legislation that is targeting trans individuals, but also backward, reactionary people who are emboldened by these laws and by capitalism’s constant attacks on trans people.

Urging harassment, assault and outright murder, the ruling class is siccing its “loyal following” on women and trans people. This is an attempt to divide working and oppressed people so as to preserve the capitalist state, which is rapidly decaying. In particular, with its anti-trans legislation, capitalism, flailing in its free fall, is attempting to break up solidarity between cis women and trans and gender-variant people.

It is critical that we continue linking our struggles together as part of the class struggle to put capitalism in its grave.

March 31 is International Transgender Day of Visibility — a good date to organize actions for unity between the Trans Liberation Movement and the Women’s Liberation Movement. It will take a relentless struggle against anti-trans, anti-woman oppression to crush class patriarchy and capitalism-imperialism once and for all.

What do we do? Unite! Fight back!

Devin Cole is a transgender Marxist organizer and writer. They are the president of Strive (Socialist Trans Initiative), a transgender advocacy organization in northwest Florida, and a member of the Workers World Party — Central Gulf Coast (Alabama, Florida, and Mississippi) branch.