On March 9 the House of Representatives passed the Protect the Right to Organize Act, the most sweeping amendment to the 1935 National Labor Relations Act since the notorious, union-busting Taft-Hartley Act of 1947. Unions are now demanding the Senate pass the PRO Act, which undoes parts of Taft-Hartley and strengthens the legal right to unionize. 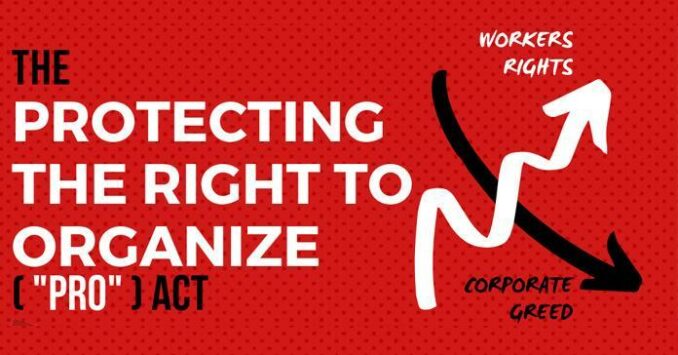 The legislation is comprehensive compared to the more narrowly focused 1995 “anti-scab” bill, or the 2007 Employee Free Choice Act, both of which Congress failed to pass.

The PRO Act includes a ban on permanently replacing strikers. The fear that someone who crosses your picket line will be hired in your place, leaving you without employment, is a major deterrent to utilizing the strike weapon when bosses demand concessions. Current labor law only outlaws permanent replacements when the strike is called over an Unfair Labor Practice.

The most important provision  of the EFCA was that it allowed unions to win recognition through “card check” — meaning if a majority of workers at a given workplace (or unit within it) sign cards authorizing a union to represent them, they don’t have to go through a National Labor Relations Board-supervised election.

PRO takes a step back from EFCA in this regard. But PRO stipulates if a union loses an election due to proven company interference, and a majority of workers have signed cards, the union wins on the basis of a card check.

This is huge! If the PRO Act were to be passed before voting at the Alabama Amazon warehouse ended, and Amazon’s proven illegal union-busting tactics caused the union to lose the vote, the company would still have to recognize the Retail, Wholesale and Department Store Union!

There are many strengths and weaknesses in PRO, but a review of both the highlights and lowlights makes it clear that its passage would be a big win for the labor movement. Union membership could shoot upward from its current historic low point of just over 10% of the U.S. working class. This happened in the 1930s after the 1935 National Labor Relations Act — the Wagner Act — codified the legal right of workers to organize and bargain collectively.

Right now PRO’s chance of passing in the Senate seems slim-to-none. This is because of an enshrined antidemocratic practice known as the filibuster. It basically allows the minority party — in this case the Republicans, none of whom voted for the inadequate “stimulus” bill even with the minimum wage hike yanked out — to block passage of progressive legislation that can’t get a supermajority of 60 votes in favor.

The Senate is often referred to as a “millionaires club”; senators’ class allegiance is to capital, not labor.

Now a much needed bill — one President Joe Biden has pledged to sign and that, as its name says, protects the right to organize — faces defeat if the Democrats cannot get enough Republican senators to vote with them. Essentially, the First Amendment rights of organized labor are being trampled — you could say Trumped — by way of the Senate’s standard operating procedure.

Devil in the details

“Captive audience” meetings — where workers are forced to listen to anti-union propaganda, as they have had to do at Amazon and previously at Walmart, Volkswagen, Nissan and other corporations too numerous to mention — are explicitly banned by the PRO Act. “Offensive lockouts,” imposed when workers won’t agree to concessionary contracts, are illegal. For the first time since 1935, there would be actual financial penalties for egregious union-busting acts, such as firing or disciplining workers for organizing.

These fines amount to pocket change for huge corporations like Amazon. But they might deter union busting at a small upstart auto parts company, or at a private liberal arts college like Kenyon College where student workers are currently on strike.

There is also an important provision that applies the law’s protections regardless of a worker’s immigration status.

With the passage of PRO, Taft-Hartley would be undermined, including its blessing of the so-called “right-to-work” laws that spread like wildfire throughout the Jim Crow South. These state laws weaken unions by making it illegal to have a closed shop, where every worker under union contract must be a union member. They prohibit “fair share” fees charged to nonmembers, who the union is still legally required to represent and who benefit from what the union negotiates.

PRO restores the right to charge fair share fees in states unions call “right-to-work-for-less,” which now number 28. Many nonunion workers will join the union once they have to pay for representation. But an open shop is still permissible.

“Secondary” strikes and boycotts are again legal under PRO. For over six decades, Taft-Hartley has hamstrung unions by banning these tactics — such as boycotting a store that sells strikebreaker-produced merchandise, or a strike by workers in a plant to keep out parts made at a strikebound factory.

However, Taft-Hartley language and state laws used to block mass picketing, and allow court injunctions limiting the number of picketers during a strike, are left intact. That makes it very difficult, if not impossible, to stop someone from crossing a picket line — moral appeals are often inadequate! Nor does PRO return to workers the right to engage in sit-down strikes, even when the boss deliberately engages in illegal union busting.

One of the most important deficiencies of the Wagner Act was who it excluded: agricultural workers, domestic workers, public sector workers and others, many of whom are workers of color. This historic and racist denial of rights to oppressed workers remains unaddressed in the PRO Act — which also leaves many gig workers unprotected.

Nevertheless, the PRO Act could stimulate a resurgence in militant, anti-racist unionism, especially where it is most needed: in the South, where union density is the lowest and where white supremacy is used to keep Black workers down and the whole working class divided. This is where, historically, “right-to-work” was used as a club against unions that fought racist segregation on and off the job; the laws’ early proponents made open appeals to backward racist attitudes.

Now Black workers in Bessemer, Ala., are showing the way forward with their drive for union recognition. Their fight has inspired workers all over the world, with demonstrations and other expressions of solidarity springing up across the country and outside the U.S. With or without Congressional action, a win in Bessemer would be a huge boost to class struggles everywhere.

Class solidarity vs. the filibuster

It’s certainly possible for Senate Democrats to introduce motions to do away with the antidemocratic filibuster that now stands in the way of the fundamental human right to have a union. But what will it take to force the Senators’ hands?

There is a lesson from the 1930s. Then a big section of the ruling class wanted to overturn the Wagner Act. The case of National Labor Relations Board v. Jones and Laughlin Steel Corporation made it all the way to the U.S. Supreme Court. This court was so conservative that President Franklin D. Roosevelt was considering increasing the number of justices to create a more liberal majority.

But the year was 1937, the year when the Detroit News moaned that sit-down strikes were “replacing baseball as the national pastime.” There were over 500 workplace occupations. Cooler heads within the ruling class knew they had to make some concessions to buy class peace. The Supreme Court upheld the Wagner Act.

It is only by escalating the class struggle that working-class and oppressed people can break the capitalist filibuster and force the Senate to pass the PRO act.

Whatever Congress does, the workers, who want and need unions, will ultimately be the force that protects the right to organize.