“Kill them all!” ordered Philippine President Rodrigo Duterte, addressing the Philippine National Police and Armed Forces of the Philippines on March 5. Two days later, state forces following the dictator’s edict carried out a deadly attack on progressive activists in the Southern Tagalog region. 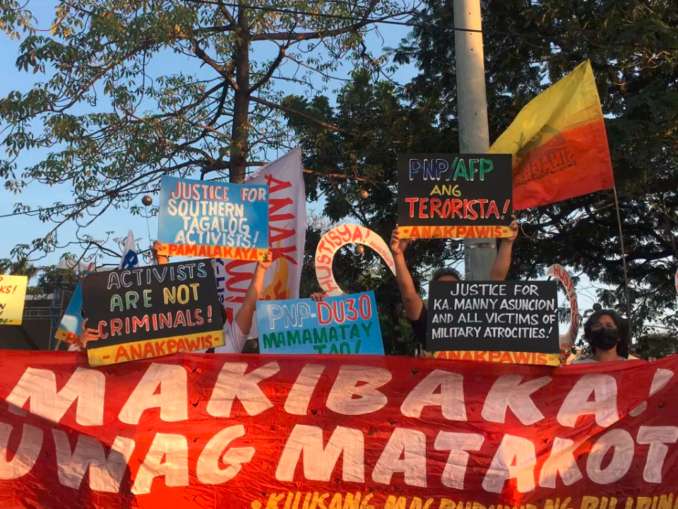 On the day now known as “Bloody Sunday,” March 7, police and military troops killed nine unarmed activists and arrested seven others. They targeted labor unionists, peasant leaders, mass organizers and human rights advocates, with the goal of eradicating the opposition to Duterte and the ruling class he represents.

The 10-year-old son of “fisherfolk” organizers Chai Lemita-Evangelista and Ariel Evangelista witnessed the horror of his parents’ murder.

Cristina Palaby, secretary-general of KARAPATAN, an alliance of Philippine human rights groups, denounced “the Duterte regime unleashing the unbridled horrors of fascism and the crackdown on dissenters.” (karapatan.org, March 7)

‘True power remains in the people’

Gabriela, a grassroots alliance of Filipino women’s groups, condemned the surge in state killings and arrests on Facebook on March 7: “The intensified crackdown follows the same old pattern of attacks against unionists, peasant leaders and activists, who are facing trumped-up charges and planting of evidence. Recently, Ramir Corcolon and Arnedo Lagunias, union leaders, were illegally arrested in Cabuyao Laguna. Military and police conduct synchronized illegal arrests and extrajudicial killings of progressive leaders, combing through … Southern Tagalog.”

The coalition stressed: “Now, a day before International Working Women’s Day, the combined forces of military and police have conducted a series of bloody crackdowns on the working class.” As they prepared to commemorate IWWD, they “remain vigilant [to] Duterte’s brutal and outright disregard of our rights. It is evident that Duterte is afraid of the growing strength of our resistance.

“On [March 8], united as one, women, farmers, trade unionists, youth, health care workers and toiling masses will lead the march to show Duterte that true power remains in the people.”

The U.S. chapter of BAYAN and the Malaya Movement Southern California held an online emergency rally March 11, followed by a demonstration outside the Philippines Consulate in downtown Los Angeles on March 13. They demanded justice for those slain and imprisoned and the ouster of fascist Duterte. They vowed to “resolutely continue the fight of our most recent martyrs who offered their lives for a country that is genuinely free!”

These organizations ask that supporters call and email Ambassador Jose Manuel Romualdez at the Philippine Embassy in Washington to condemn the massacre, insist on punishment for the killers and press for the release of all political detainees. They demand the Philippine Supreme Court end the “weaponization of search warrants meant to silence activists, political dissenters and government critics.” The draconian Anti-Terrorism Act of 2020 must be revoked, they say, as it allows legally sanctioned state violence. (See BAYAN-USA Facebook for contact information.)

Philippine organizers ask their allies in the U.S. to pressure Congress to end all security assistance to Manila, which funds police and military operations against people’s organizations and political opponents. And they seek an end to the Visiting Forces Agreement, which provides U.S. “counterinsurgency” training to Philippine repressive forces.

The reign of terror is not over!