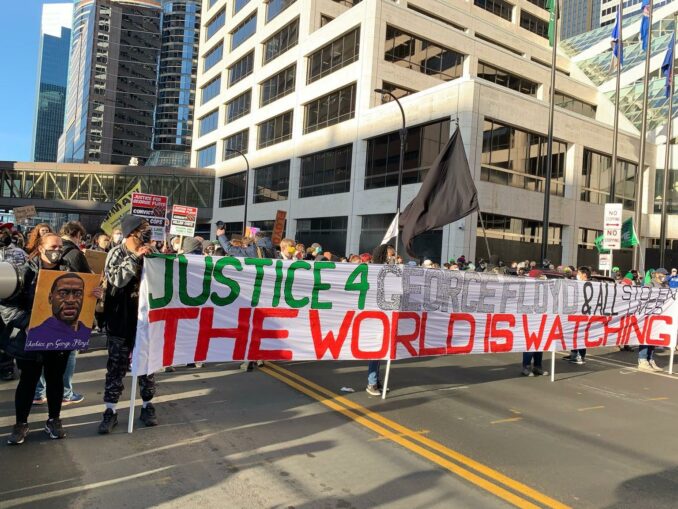 More than 1,000 protested March 8 outside the Hennepin County Government Center in downtown Minneapolis, as the trial of Derek Chauvin, the disgraced ex-police officer who murdered George Floyd on May 25, 2020, started at 8:00 a.m.

The Twin Cities Coalition 4 Justice 4 Jamar (TCC4J) spearheaded the day one demonstration, which was supported by over 30 local activist organizations.

The early morning protest started on the city streets outside of the Government Center plaza, because the “public plaza” was surrounded and intersected with heavy fencing and razor wire, leaving a tiny cage for the general public.

At 5:00 a.m., it was still unclear if the scheduled jury selection and trial would go forward, due to a Friday appeals court ruling to allow a third degree murder charge in the case. The coalition statement on this legal issue declared, “The monster Derek Chauvin inflicted nine slow minutes of intentional torture, causing death. The world watched a lynching — murder in every degree.”

After the opening rally, the crowd marched through the streets, stopping to hear speeches along the way. Longtime activists gave shout-outs to the many students who skipped school to attend. New activists gave props to folks who were fighting back in the 1960s.

At the trial, Judge Peter Cahill ordered that jury selection would go on, but there were so many motions that jury selection is paused. The organizers’ statement noted: “We will protest on key dates of the trial — including opening arguments, closing arguments and, of course, on verdict day.” They also said they will fight for convictions against the other three former officers, who “held down Mr. Floyd as he died and stopped others from rescuing him.”

Many of the groups organizing the March 8 rally are also involved in efforts to stop the systems that gave rise to killer cops like Derek Chauvin. In Minneapolis, TCC4J plans to release a charter amendment for community control of the Minneapolis police. At the state capitol, activists are outraged at how state legislators of both parties are “putting their knee on the neck” of bills to stop our family members from being murdered with impunity.

Key demands of the coalition included: “Justice for George Floyd! Convict Derek Chauvin — give him the longest possible sentence. Justice for all stolen lives! Community control of the police — CPAC now! Drop the charges against the MN646+ and all protesters. Convict all killer cops!”