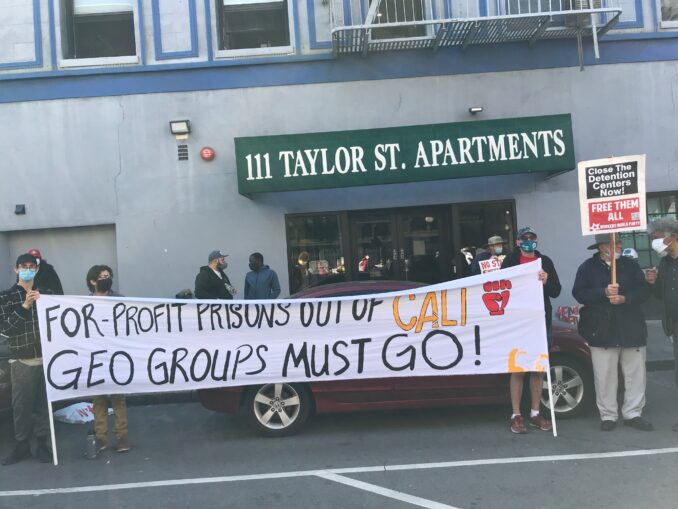 March 7 — Streets and sidewalks around 111 Taylor Street, a semi-lockdown halfway house run by the for-profit GEO Group, shook today with resounding chants: “What’s the call? Free Malik, and free them all!” Over 200 protesters carrying brightly colored banners took over the streets to demand Malik Washington be released from custody and allowed to go home.

Washington is a formerly incarcerated federal prisoner held at Taylor, and he is also the new editor-in-chief of the San Francisco Bay View National Black Newspaper. He recently broke the silence around GEO’s mishandling of a COVID outbreak at the lock-up. For exercising his First Amendment rights as a Black journalist, he is threatened with immediate return to federal prison.

When GEO officials realized Washington was communicating with people outside the Taylor facility, they placed him in house arrest in his room and confiscated his phone. Public pressure eventually won him a return to work. Only recently was his phone returned. (Workers World, Jan. 19)

Stryker pointed to the first floor of the Taylor facility and said, “That used to be Compton’s Cafeteria. It was where [trans] people used to come at night to get out of the cold . . . to show that they survived their night. The cops would come in and harass them repeatedly. Then one night [the people] stood up and pushed back and made history. Just like we are making history and pushing back against GEO Group’s occupation of this building.” (Guardian, June 21, 2019)

In August 1966, three years before the Stonewall Rebellion, drag queens, trans women and sex workers rose up and fought the police in this downtown Tenderloin neighborhood in the Compton’s Cafeteria Riot. Victor Silverman and Stryker documented this history in “Screaming Queens: The Riot at Compton’s Cafeteria.” (imdb.com/title/tt0464189/)

Stryker added, “We are here today to support Malik. . . . We think it is an obscenity that this historic site of trans resistance to police repression, and to the carceral system, is occupied for profit by a group like GEO.”

Jeremy Miller said, “We are here today, because Malik was standing up for the people,” ending with the chant, “Free Malik, but that’s not all! Keep on pushing! Free them all!”

A letter of support from San Francisco District Attorney, Chesa Boudin, was read: “It is deeply concerning when people like Malik Washington, who are devoted to truth telling, are targeted precisely for trying to ensure that critical information is made public. We must ensure that the truth be told to protect the vulnerable.”

Editor Nube Brown, who is also a leader of California Prison Focus, urged that the fight continue for Washington, and for the closure of companies like GEO. She asked everyone to virtually pack the courtroom for Washington at the March 10 hearing on his case. To give support, go to linktr.ee/freemalik.

Malik Washington filed a lawsuit against the U.S. Federal Bureau of Prisons Feb. 1 to oppose the gag rule placed on him by the BOP. The activist journalist was the first person to expose GEO’s cover-up of COVID. The company’s mishandling of the virus has become public knowledge and the subject of a short video produced by the San Francisco Public Defender’s Office, “111 Taylor (During a Pandemic).” (wearedefender.com/111-taylor)

GEO Group is one of the largest managers of private prisons in the U.S., and it controls a number of ICE (Immigration and Customs Enforcement) detention centers. Multiple lawsuits have been filed against the company for inhumane treatment. ICE prisoners have organized hunger strikes and other actions to protest dangerous conditions faced in its facilities during the pandemic.

Though President Biden issued an executive order that the federal government will stop using private prisons, that order did not include privately held ICE detention centers like those run by GEO. (US News and World Report, Jan. 26) At the rally many speakers from immigrant rights groups exposed the atrocities suffered by incarcerated migrants in GEO-run ICE detention centers.