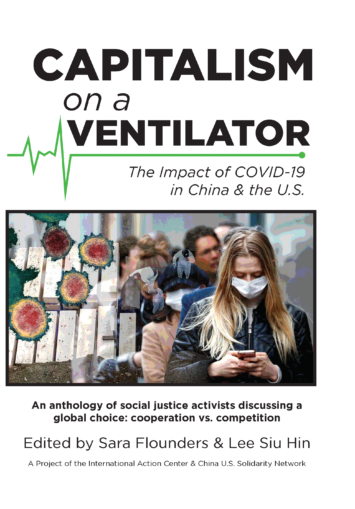 The Amazon corporate conglomerate is notorious for using its power to surveil and control every minute of workers’ lives, to dominate labor rates, control local governments and demand huge tax rebates. Its management threatens to close facilities if its demands remain unmet.

Amazon is arrogantly determined to decide what information we hear, what discussions we have, what books we read.

As big as it is, Amazon is afraid. Right now its management fears its U.S. workforce is organizing. It fears challenges to its censorship and control. And it has retreated before one challenge to its power to censor.

In question is Amazon’s attempt to ban the book, “Capitalism on a Ventilator,” a book of essays by prominent anti-imperialists, as investigative journalist Max Blumenthal tweeted March 3. Blumenthal added, “The book surveyed the role of capitalism in exacerbating the pandemic and contrasted China’s effective response with the U.S. failure — too much for Amazon, apparently.”

This broad diffusion of the truth apparently led to the authoritative Global Times of China running an article March 4 highlighting Amazon’s censorship, with the title in its English-language edition: “Amazon removes book on epidemic response, ‘deprives U.S. policymakers of self-reflection opportunity.’” (tinyurl.com/y5yty29s)

The article quoted from Max Blumenthal’s tweet and summarized the book’s contribution: “A book that surveyed and compared the U.S.’s and China’s reaction to the COVID-19 pandemic was recently removed from Amazon, the top ecommerce platform in the U.S., a move that again revealed the U.S.’s biased attitude on the ‘freedom of speech’ it claims, observers said.”

As suggested by its title, the book compares the two countries’ different approaches toward attempting to control the pandemic. It highlights U.S. capitalist society’s lack of infrastructure for social services, in contrast to its huge spending on infrastructure for military, police and prisons.

World View Forum, the book’s publisher, had received a message from Amazon Sept. 24, the book’s scheduled debut day on the Amazon site. The message read that the book “does not comply with [Amazon’s] guideline” and delisted it from the site.

When the Global Times contacted Amazon for comment March 4, an Amazon customer service representative told them they were unclear about the delisting.

This challenging attention and the call from China’s Global Times, with 1.5 million readers in the print edition and many more online readers, changed minds at Amazon. Its management clicked a switch and the book was listed as “available” for sale.

Book on China and COVID unblocked

When Amazon blocked “Capitalism on a Ventilator,” its publisher, World View Forum, attempted to remove the book from Amazon’s site. In a double form of censorship, Amazon kept the book listed on their site but marked as “Unavailable.” Listing it this way actively discouraged people from looking further for the book on other distribution sites.

The mammoth corporation’s management has yet to contact the book’s editors, Sara Flounders and Lee Siu Hin, or the book’s publisher, World View Forum. Although the print book is now suddenly “available” for sale on Amazon, the eBook is still not available. Even those who bought the book before Amazon banned it in September cannot read it on a Kindle app. So the censorship continues.

The book was a joint project of the International Action Center and the China U.S. Solidarity Network. The two groups were determined to get past Amazon’s censorship. To do that they spent two months in a public fund appeal and raised enough funds to print “Capitalism on a Ventilator.” They arranged distribution of the paperback through Shopify and the epub file through Kobo, releasing the book on these platforms last December.

The United States still faces the highest number of COVID-19 infections and the largest number of deaths of any country in the world and has unrolled a chaotic, uncoordinated vaccination program. In this atmosphere, the book raises the sharp challenge: “It doesn’t have to be this way.”

Flounders is a co-editor of “Capitalism on a Ventilator — The Impact of COVID-19 in China and the U.S.” and urges readers to purchase the paper book  through Shopify at: bit.ly/CapVentBook and the ePub through Kobo at: bit.ly/CapVentEBook.