A people’s movement against an anti-people corporation has intensified, backing the union drive at Amazon’s Bessemer, Ala., warehouse. The courageous Southern union warriors are finally starting to get the support they need and deserve. 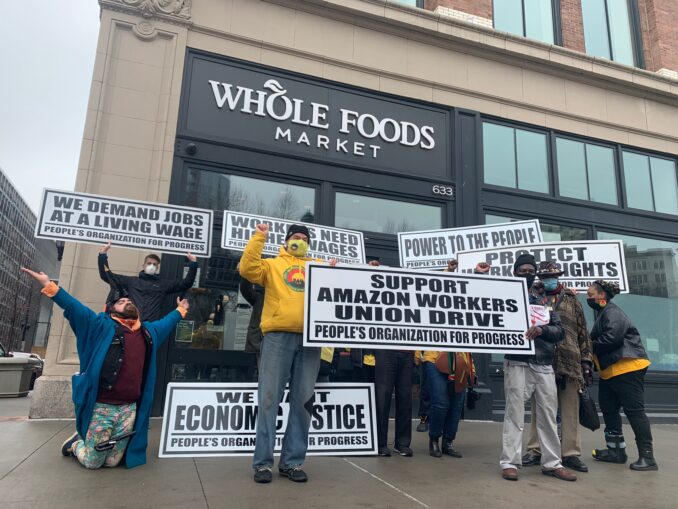 Some three dozen organizations loaned their names to a letter urging President Joe Biden to come out on the side of the Amazon workers fighting for a union. Biden had angered unionists and progressives for publicly taking a “neutral” stance on the representation election taking place now through March 29. Signers included UNITE HERE and Flight Attendants (AFA-CWA) unions, Maine AFL-CIO, the National Employment Law Project and the Working Families Party.

Feeling the pressure, on Feb. 28 Biden came out against Amazon’s union busting, affirming the right of every worker to choose union representation.

Solidarity has been growing since the Feb. 20 National Day of Solidarity. Renowned actor and activist Danny Glover stood outside the Bessemer facility Feb. 22, holding a sign that read “Remember Mail Your Yes Ballot.” Glover waved, gave “thumbs up” and said, “Stay strong!” to the workers coming into and leaving work. His presence drew widespread media attention to the union effort.

“It’s about justice,” Glover said. “The union is about looking out for the welfare of workers and is willing to stand up and fight for justice . . . It’s just one step, among the many steps, that are being taken around the country, in the service of justice.” (tinyurl.com/yd3xdv7h)

The 1.6 million-strong AFSCME issued a solidarity statement Feb. 23 declaring, “It’s time for Amazon workers to have a voice on the job.”

On Feb. 26, Ta-Nehisi Coates, Tina Fey, Shaka King and over 1,760 members of Writers Guild of America East and WGA West signed a public statement urging Amazon workers to “Vote Union Yes.” Over 30 of the signers have produced films and programs for Amazon Prime.

Southern Workers Assembly, Workers Assembly Against Racism, Democratic Socialists of America, Our Revolution and People’s Organization for Progress, along with the newly formed Support Alabama Amazon Union campaign, are among the groups that continue to organize demonstrations outside sites for Amazon, Whole Foods and Amazon’s union-busting law firm Morgan Lewis.

Support Alabama Amazon Union has called for a “virtual week of action” March 1-5, culminating in a zoom organizing meeting March 6 to build for an International Day of Action March 20. For more info visit supportamazonworkers.org.