As Amazon workers in Bessemer, Ala., vote to unionize, they are gaining support.  On Feb. 20, demonstrations took place in solidarity with BAmazon workers in 50+ U.S. cities in 30 states, including several in the South.

The National Day of Solidarity with BAmazon was called by the Southern Workers Assembly, backed by the Support Alabama Amazon Union Campaign and many others. Demonstrations were encouraged at Amazon’s warehouses, distribution centers and Whole Foods locations. Some protests targeted the union-busting Morgan Lewis law firm used by Amazon CEO Jeff Bezos.

The majority Black workforce in Bessemer is challenging the world’s richest human, Amazon CEO Jeff Bezos, in their fight to be recognized by the Retail, Wholesale and Department Store Union (RWDSU).  Bezos is so desperate to bust the union drive, he is illegally offering workers $2,000 to $3,000 “resignation bonuses.”

Speaking in East New York, part of Brooklyn, N.Y., outside an Amazon fulfillment center, Omowale Clay from the D12 Movement said: “A yes vote for the union will be a mighty blow against Amazon. A win in Bessemer will be a shot in the arm to organized labor, which will be heard around the world!” 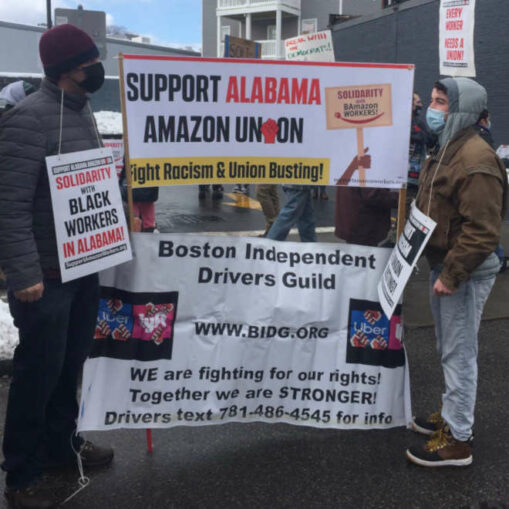 Kristin Turgeon of Workers World Party and the tuba-led, 10-piece Boston Area Brigade of Activist Musicians fired up the crowd with Florence Reece’s “Which Side Are You On?” The crowd shouted, “We’re on the Workers’ Side!” Amazon Prime drivers, bus drivers and others passing by blared horns. Picketers filled the Whole Foods’ entrance to express their disgust with Bezos’ greed and their enthusiasm for Alabama’s history-making BAmazon workers.

Monica Robinson, a leader in the Coalition of Labor Union Women stated: “Every worker has the right to a union.” She suggested Amazon’s “Time off Tasks” — punitive measures, used to control workers — be renamed “Terrible Operating Tactics.”

Workers from the Philadelphia Museum of Arts, the University of the Arts and a  U.S. Post Office retiree all described fighting Morgan Lewis’ attempts to crush their union drives or efforts to strengthen existing union contracts. Members of Teamsters Local 623, PASNAP and Philadelphia Teachers Federation spoke.

Pam Africa, with MOVE, pointed to the vital role Amazon workers play globally.  Letters from two incarcerated workers in solidarity with Bessemer were read. The event was endorsed by a number of labor and community groups. Spiral Q donated the Bezos puppet.

In Durham, N.C., 50 workers and community members gathered at RDU5 Amazon Fulfillment Center to leaflet workers during shift change. Several participated in a caravan of cars, decorated with pro-union signs and honking horns, that circled the parking lot. Southern Workers Assembly leaflets were distributed. Fearful of their presence, Amazon changed workers’ shift times to avoid their receiving information on the union efforts.

Organized by the Durham Workers Assembly, the event was endorsed by the National Domestic Workers Alliance-We Dream in Black, Raise Up/Fight for $15 and a Union, Durham Association of Educators, Bull City Democratic Socialists (DSA) and Smash Racism Raleigh.

The sound of honking horns from approving passing motorists could be heard in Whole Foods in the adjacent mall. The event ended with a march into the mall past Whole Foods to ensure workers knew which side they were on — the union side.

Buffalo, N.Y.: Members of WWP, the Queen City Workers’ Center, Young Democratic Socialists (YDSA), Erie County Green Party and People’s Party of WNY stood up to the ruling class and an icy winter wind in support of BAmazon’s national day of solidarity. They rallied, raised a banner and handed out flyers outside Whole Foods-Amherst. Flyers about the fight to save the people’s post office and fire the USPS Board of Governors were distributed.

In Cleveland — devastated by deindustrialization — over 30 people marched then rallied at the soon-to-open Amazon Hub. Built atop the bones of Midland Steel Corporation, a former union shop, the Bezos world of high–tech, low–wage work is engulfing the entire county, with over 7,000 workers at two Amazon Fulfillment Centers, Whole Foods and two Amazon Hubs.

Houston: Drivers honked horns and waved for hours, as activists gathered outside Whole Foods near a busy intersection. Youth chanted “Amazon workers, Yes! Bezos, No!” Drummers kept up the beat. The dynamic action was a strong show of solidarity with the BAmazon workers.

“I support the workers’ rights to unionize and earn fair wages and treatment. When we all work together in solidarity, we win victories,” exclaimed Frances Dee.  “Overworked and underpaid workers deserve our support,” said Caleb Granger.

A member of the Austin Federation of Teachers who drove to Houston said: “As a union member, I feel strongly that all workers must support the Amazon workers.” Recent Morehouse College graduate Trey Legall said: “This union will be historic, the first for mainly Black Amazon workers in the deep South. We stand with the workers in Alabama; we will fight for them, and we will build a workers world!”

Trent Willis, President of Local 10, International Longshore and Warehouse Union, expressed his union’s strong solidarity with Bessemer workers, who are organizing a union against all odds. ILWU Local 10 has a long history of fighting racism, war and gentrification.

Portland, Ore.: Outside the Amazon Fulfilment Center, nearly 100 demonstrators from over 10 unions and community groups rallied in support of Amazon workers who were fired here for trying to organize a union. The massive facility located outside Portland employs 2,000 workers. Amazon workers described the dangerous, dehumanizing working conditions they face. A main organizer for the event, Brian Denning, one of those fired by Amazon, spoke and led chants supporting the power of the Bessemer Alabama Amazon workers’ fight.

The event was organized by the Portland Amazon Workers Solidarity Campaign. Philippine groups Gabriela, Migrante PDX and Anakbayan came in support of the many Asian workers at the plant. The Unemployed Workers Council PDX, Workers World, Jobs with Justice, DSA and Sunrise, a new national youth group fighting for climate change and union solidarity, attended. 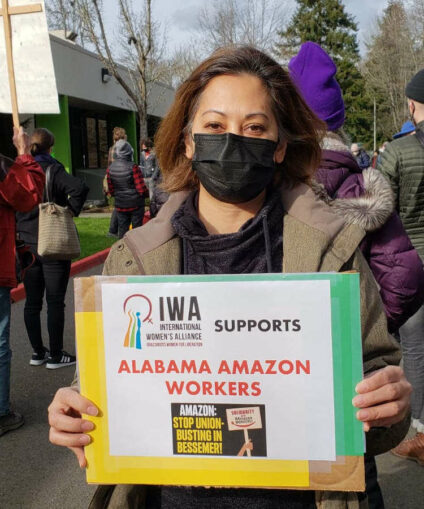 Seattle is Amazon’s corporate headquarters, with over 75,000 workers in 55 tall buildings in the city center and 25 suburban warehouses. Year-round protests over the extreme gentrification crisis caused by Amazon’s takeover of this vast amount of real estate are widening to include solidarity for the union organizing drive at Bessemer. Two protests were held here Feb. 20.

A protest of 200 union supporters started at the Washington Multi-Family Association, a huge pro-landlord lobbying group. Called by DSA and supported by UNITE HERE Local 8, the rally included Amazon Employees for Climate Justice — tech workers in solidarity with the Bessemer workers. Demands include rent control, a ban on evictions and cancellation of back rent. The demonstrators marched to an Amazon warehouse along a high visibility route where passing drivers continuously honked support.

A second solidarity protest involved a car caravan, bike brigade and rally that surrounded the block around the Spheres Amazon headquarters. It was called by Socialist Alternative, Tax Amazon and Seattle Councilmember Kshama Savant, who condemned Democratic Party leaders for trying to take away an affordable housing initiative she had helped win that taxed Amazon and other rich corporations to fund housing and Green New Deal programs. (tinyurl.com/ya896fjh) Savant declared, “The workers of Seattle are rooting for you at Bessemer.”