Feb. 19 — Almost 10 million voters, a record 81% of those eligible, went to the polls Feb. 7, despite the pandemic, to choose among 16 candidates in Ecuador’s presidential elections. The two top vote-getters will compete in the April 11 runoff elections. No candidate received enough votes to win in the first round. 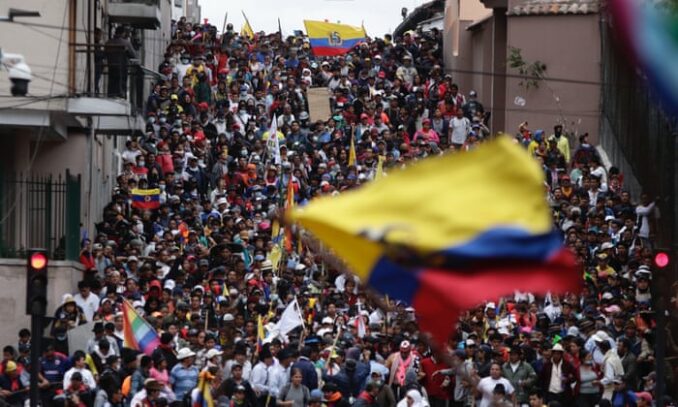 Three center-left parties got 70% of the votes.

Andrés Arauz, representing a continuation of the movement led by former President Rafael Correa, came in first place with 32.7% of the vote. Arauz is a former minister in the government of Correa running for the progressive Union for Hope-Central Democratic Party (UNES-CD).

Lawyer Dr. Yaku Pérez came in third with an unprecedented 19.4% of the vote for his Patchakutik party (PK), which represents the Indigenous Movement and demonstrates mass support for the goals of the uprising.

Entrepreneur Xavier Hervas, the Tik-Tok candidate, was the biggest election surprise, capturing many of the youth. He came in fourth with 15.7% of the vote for the Izquierda Democratica (ID), which identifies as a social-democratic party.

More than 1.2 million null and blank votes reflect massive uncertainty and frustration of people who can’t find a candidate they trust.

Ex-banker Guillermo Lasso, considered “co-governor” of the country with incumbent and extremely unpopular President Lenín Moreno, got only 19.7%, a distant second place and a virtual tie with Pérez to participate in the runoff.

Lasso’s identification with Moreno resulted in an avalanche against his party CREO (Creating Opportunities) and the Social Christian Party (PSC). These two normally competing right-wing parties united to back Lasso in an attempt to maintain their grip as the power brokers in Ecuador. Moreno himself got only 1.5% of the vote, an electoral disaster.

The heavy hammer that nailed neoliberal right-wing governance was the anger, pain and frustration of millions of people who had participated in or supported the Indigenous-led Great Uprising of October 2019. That social explosion against the International Monetary Fund austerity package shut the country down for 11 days.

Washington was behind the Moreno government and backed its vicious and brutal repression of the October 2019 uprising.

During the last 12 months of the pandemic, Moreno used the crisis as both an opportunity and a political shield. Knowing that the people would not go into the streets as they did during October, he satisfied the IMF demands for billions in loan repayments and enacted neoliberal laws, which only magnified the harm caused by the crisis. The traitor goes down in history as Ecuador’s worst president. Unemployment, hunger and death stalk the land.

A million workers lost their jobs during the pandemic, and more than 35,000 people died above the annual average due to COVID-19. Education and health care cuts and unemployment mean untold misery for the poorest Ecuadorians. The youth of Ecuador, and especially Indigenous and Black youth, are facing a very bleak future indeed.

Moreno met recently in Washington, D.C., with Luis Almagro, general secretary of the Organization of American States (OAS). Almagro was a key player in the 2019 coup against Bolivia and the unconventional U.S. war on Venezuela. Moreno invited U.S. police and military to advise the forces of state repression, and he upgraded the airport in the Galapagos Islands for the imperialists to use at their discretion against Venezuela. Now Lasso has dirtied the election process by baiting Venezuela.

Perez’ supporters see him as a militant water defender, a champion of Indigenous territorial and cultural rights. Others have a different opinion. The victorious Bolivian President Luis Arce, for example, whose landslide victory reversed Bolivia’s coup, refused to invite Pérez to the inauguration in Bolivia. The truth is that Pérez and Patchakutik had collaborated with the Moreno government until just before the October uprising.

Arce did invite Arauz and Indigenous leader Jaime Vargas Vargas, President of the Confederation of Indigenous Nations of Ecuador (CONAIE), to come to his inaugural ceremony, and they both attended Nov. 8, 2020.

Arauz promises to restore Ecuadorian sovereignty and rebuild the regional integration that the U.S. and the Latin American pro-imperialist oligarchy opposes. He has friendly relations with leaders in Cuba, Venezuela and several progressive governments in the hemisphere.

It may be said that Arauz needs to begin the process of unification now in order to win the second round, facing a formidable right-wing power structure, assuming Lasso remains his opponent. Lasso’s second-place finish, however, is still being protested by Pérez and a large part of the Indigenous movement. Washington prefers Lasso, but will use all its weapons against Arauz.

The Indigenous-based Patchakutik Party will be a force in the next government, and debate will return to the National Assembly. Two-thirds of the future parliament will be formed by the three center-left parties. Arauz’s party, the UNES-CD, won 46 seats for the Progressives; Yaku Pérez and his Plurinational Unit (PK) have 26 seats; Social Democracy (ID) has 17 seats.

Banker Guillermo Lasso and his allies have only 12 seats, while the party of Moreno got none. The right wing took a big hit.

The new president and the new Assembly will need to cooperate to deal with the failed state, an economy in recession, unemployment and the crisis surrounding the provision of COVID-19 vaccines. Taxing the rich and halting the drain of resources into tax havens are progressive issues. The decriminalization of protest, extractivism, the rights of the LGBTIQ+ population, the right to abortion, restoration of labor protections and the right of unions to bargain collectively, the expansion of human rights, free trade agreements and mining concessions will all be debated.

International interference: The Colombian regime of Ivan Duque, a cat’s-paw of U.S. imperialism, is working with regional media and the Moreno forces to produce fake news that discredits Arauz and his UNES-CD party in the weeks leading up to the April 11 final elections.

There are unresolved differences between the CONAIE Indigenous movement and the Indigenous candidate Yaku Pérez. However, those differences have not resulted in a pact between CONAIE and Arauz’s UNES-CD.

If Andrés Arauz as president wants to build an alliance with the Indigenous movement in the interest of the well-being of most Ecuadoreans, he will have to confront powerful forces within his own party. Those are the forces that depend on the extraction of wealth from Indigenous areas.