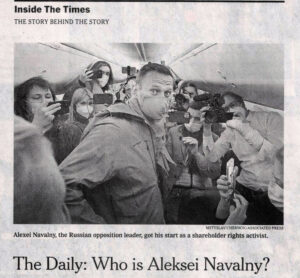 At the very time Democrats in Congress were attempting to impeach Trump for the Jan. 6 fascist rampage, President Joe Biden expressed support for a Russian political leader allied with a gang comparable to the Proud Boys. In his first contact with Russia’s President Vladimir Putin as U.S. president, Biden immediately pressed for the release of anti-Putin candidate Alexei Navalny.

Navalny’s notorious record is well-known in Russia. U.S. and German officials, who describe him as a dissident journalist, investigative blogger or anti-corruption activist, are being deceptive.

Why not Assange or Mumia?

There is an international campaign for the release of a far more prominent investigative journalist from Australia — Julian Assange. Assange exposed U.S. government corruption, surveillance and war crimes. Biden could have sent an encouraging human rights message by dropping U.S. demands for the extradition of Assange.

There is a 40-year campaign for the release of another investigative journalist, an acclaimed Black author who exposed racist police brutality in Philadelphia — Mumia Abu-Jamal. If Biden called for his release, it could send a message to the Black Lives Matter movement that the U.S. is addressing systemic racism. Instead, he has focused his “human rights” attention on a right-wing Russian national chauvinist!

The difference is that Assange and Abu-Jamal challenged the power of the U.S. ruling class. Navalny embraces it.

Navalny is not a political unknown. For many years he has been in the limelight, in the media, on video and in the streets in fascist mobilizations that call for expelling all non-Russian peoples from Russia. Navalny was a driving force in the annual anti-Muslim, anti-Semitic, anti-immigrant “Russian March” in Moscow. Its central themes are “Take Back Russia,” “Russia for Russians” and “Stop Feeding the Caucasus” — the latter a demand to end federal subsidies to poorer, less-developed, largely Muslim regions of Russia.

Navalny is the organizer of the “Movement Against Illegal Immigrants” and “Great Russia,” and he has called for the breakup of Russia. He has demanded the expulsion of all peoples from the Caucasus and Asia, whether they are citizens living in what is still part of the Russian Federation or are from surrounding Central Asian republics, which were severed after the Soviet Union collapsed. On video Navalny has whipped up sectarian violence by labeling people of the Caucasus “rotten teeth, to be extracted” and “cockroaches that must be exterminated.”

Navalny calls for aggressive privatization of more Russian industries, cuts in public spending, total freedom for businesses and a dramatic reversal of social guarantees that still remain from the Soviet Union. Navalny boasts that if he were president, there would be very friendly relations with the U.S. and the European Union.

Navalny has been arrested numerous times on corruption and embezzlement charges, coming from former collaborators. Many charges are based on his looting of organizations he himself formed. But this has not stopped Russian oligarchs and Western agencies from funding his Anti-Corruption Foundation or aiding him in maintaining offices and staff in 43 cities across the country. It has not stopped the U.S. National Endowment for Democracy from providing $5 million funding for Navalny and other phony anti-corruption campaigns.

But as with Bolsonaro in Brazil or Trump in the U.S., his reactionary views are masked as a campaign against corruption

Of course there is corruption in Russia. Capitalism, an economic system based on the theft of human labor and the private expropriation of public resources, is by its very nature corrupt.

So-called anti-corruption campaigns can have appeal to people enraged at the system’s glaring inequality. But, intentionally, such campaigns have no program for the masses beyond replacing the current politicians in office.

Now Navalny has tried to refashion himself by opposing new pension regulations that raise retirement age. This is a completely opportunist reversal of the position he and his Party of Progress held for years: to raise the retirement age and liquidate the government pension fund.

The proposed increase in the retirement age, from 60 to 65 years for men by 2028 and from 55 to 63 years for women by 2034, was met with outrage across Russia; it took major protests to force a retreat on some aspects of the plan. Russia’s retirees — old enough to remember pension guarantees under the Soviet Union — are not likely to be fooled by Navalny’s phony about-face on pensions.

All of Navalny’s ugly history is glossed over by the western corporate media. He is consistently called a “liberal” dissident. This implies he is progressive.

“Liberal” has a very different meaning in Russia than it has on the U.S. political spectrum. It does not mean a vague call for increased social programs, greater inclusion or liberalizing reactionary laws on abortion and LGBTQ+ rights.

Being a liberal in Russia means supporting “liberalization,” i.e., neoliberal policies and free market economics. A more accurate term is market liberals, who advocate greater freedom for capitalist markets. Liberalization means an “opening up” of trade and an easing of government regulations that restrict profiteering by corporations.

When financial publications in Russia, the U.S. and EU applaud Navalny as being the “best hope for the liberalization of Russia,” they are looking for a return to the open looting of industry and resources by western capitalists during the Boris Yeltsin years of 1991-2000.

The Yeltsin years and free markets

The forced dismantling of the Union of Soviet Socialist Republics in 1991, under President Yeltsin, was a break with a planned socialist economy and total state ownership of industry. The introduction of a capitalist market economy led to the looting of almost every sector of the economy, especially manufacturing, energy and banking. State farms were broken up without a plan, and government subsidies to industries and agriculture were cut. Price controls ended. In two years, more than 15,000 firms were transferred from the state to private hands.

A surge of U.S., German and other European Union capital into Russia — to buy up public assets and resources at bargain-basement prices — led to a chaotic free-for-all, followed by economic depression, hyperinflation and mass unemployment. The national health system and social programs were all but eliminated; life expectancy plummeted and infant mortality soared.

This “liberalization” — economic shock therapy for the masses — has been called the most cataclysmic economic collapse in peacetime of an industrialized country.

At the same time, a small handful of business oligarchs, tycoons and outright pirates became billionaires and moved as much of their stolen wealth to western banks and offshore accounts as they could. None of this stolen wealth was reinvested in modernizing Russian industry.

Sectarian wars broke out in Chechnya, Georgia and Azerbaijan, all driven by competition for control of now-privatized resources.

Yeltsin was completely compliant with U.S. and European capitalist demands. As the Soviet Union collapsed as a world power, the same brutal “free market” unfolded across Eastern Europe. The U.S.-commanded NATO military alliance expanded through Eastern Europe in the 1990s — this reconquest of a vast region was a ruthless process.

Russia ended its trade and military alliances with East European countries, the DPRK, Cuba and developing countries in West Asia and Africa. This allowed a surge of U.S. wars of recolonization in the Arab and Muslim world, including Iraq and Afghanistan, along with the war that forcibly dismantled Yugoslavia.

A wave of mass anger and a second impeachment attempt for corruption led to Yeltsin’s sudden resignation on Dec. 31, 1999, in exchange for immunity. This left Prime Minister Vladimir Putin as acting president.

Putin did not reverse capitalist ownership in Russia. Nor did he knit the Soviet Union back together. But he did begin to reorganize Russian industry, impose controls on western capitalists’ open looting and renationalize some essential industries. Hyperinflation was reined in.

Russia’s economy today is smaller than Brazil’s. Raw materials in oil, gas, minerals, grains and lumber are its primary exports. Russia’s industrial capacity is gutted; it is no longer the superpower of 30 years ago.

But imperialists are never satisfied. They want it all.

In 2014, during the Obama/Biden Administration, the U.S. financed a fascist coup in Ukraine, formerly part of the Soviet Union. This brought about the first resistance to 15 years of U.S./NATO expansion. Putin supported the uprising against fascism in the heavily industrialized Lugansk and Donetsk regions of eastern Ukraine. He blocked NATO seizure of the Crimea, the location of Sevastopol Naval Base and Russia’s only warm water port.

For this resistance — to prevent Russia’s total disintegration as a country — the U.S. and the EU imposed a series of economic sanctions on Russia. The hope of Wall Street was that the resulting economic dislocation and inflation would pressure the oligarchs to push Putin out.

Further sanctions were imposed when Russia came to Syria’s aid in 2015. Russia intervened after four years of U.S. regime-change operations — the financing of tens of thousands of mercenary forces and coordinated bombing that displaced 25% of Syria’s people.

To Washington’s ire, Russia’s military industries are part of national defense and were never privatized. Russian diplomacy and arms sales provide some protection against aggressive U.S. operations from Iran to Venezuela. Closer trade agreements with China have helped Russia get around the strangling web of sanctions.

Russian oligarchs, whose obscene wealth is housed in Western banks, are threatened by all this. They are looking for new relations with imperialism. Growing alliances of Russia with China and the former Soviet Republics are not in their interests.

This is Navalny’s base.

Navalny has little support in Russia. After an alleged poisoning by Putin forces last fall, his approval rating peaked at 20%. One poll now shows only 2% favor him as a candidate! But Navalny is dangerous because he has powerful supporters in the West and among Russian oligarchs.

Progressives should not be tricked into supporting this pro-fascist neoliberal.