Fifty years after the end of the U.S. Civil War — and during the height of horrific lynchings of Black people in the Deep South by KKK terror — the Association for the Study of Negro Life and History was founded in 1915 by Dr. Carter Woodson and Rev. Jesse E. Moorland to research and promote the individual contributions of people of African descent, both inside the U.S. and throughout the African diaspora.

The ASNLH launched a national “Negro History Week” in February 1926. Fifty years later in 1976, due to the influence of the Civil Rights Movement, this “Week” officially evolved into Black History Month in the U.S.

Even before 1926, the plight of Black people as an oppressed nation inside the U.S. caught the international attention of socialists and communists.

Vladimir Lenin, the leader of the Russian Revolution, wrote in 1917: “In the United States, [Black and Indigenous peoples] account for only 11.1%. They should be classed as an oppressed nation, for the equality won in the Civil War of 1861-65 and guaranteed by the Constitution of the republic was in many respects increasingly curtailed in the chief Negro areas (the South) in connection with the transition from the progressive, pre-monopoly capitalism of 1860-70 to the reactionary, monopoly capitalism (imperialism) of the new era, which in America was especially sharply etched out by the Spanish-American imperialist war of 1898 (i.e., a war between two robbers over the division of the booty).” (“Statistics and Sociology,” tinyurl.com/3eavxy5f)

The great Vietnamese anti-colonial leader against U.S. and French imperialism, Ho Chi Minh, stated in his essay on “Lynching” in 1924, “It is well known that the Black race is the most oppressed and most exploited of the human family.” (La Correspondence Internationale, No. 59) He had written a prior essay on the Ku Klux Klan.

Decades later Sam Marcy, the late chairperson and working-class theoretician of Workers World Party, wrote, “Of all the great domestic political problems facing the working class and the oppressed people, none surpasses in importance the relationship of national oppression to the class struggle. Indeed, one may say that it is at the heart of the basic social problem in the United States.” (Nov. 25, 1983)

Black History Month has unfortunately been co-opted by bourgeois forces to focus mainly on past “achievements” of individual Black people and not on the impact of Black-led mass movements in ongoing struggles for national liberation and full equality today. 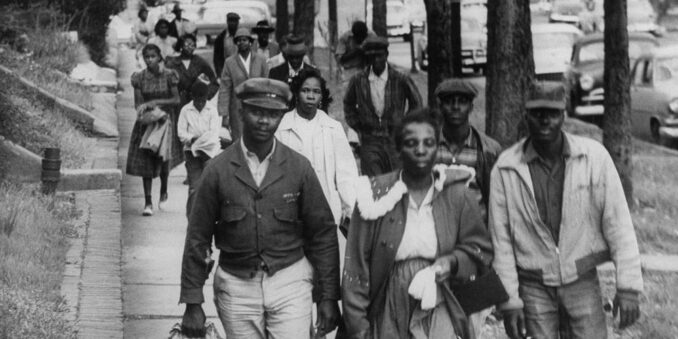 Bus boycotters, no matter their age or ability, walked miles to work in Montgomery, February 1956.

Take the historic Montgomery Bus Boycott. Bourgeois historians like to portray  Rosa Parks as an isolated Black seamstress, who just happened to refuse to give up her seat to a white man on a segregated bus on Dec. 1, 1955.

The truth is that hers was a planned action on the part of the local NAACP, of which Ms. Parks was a secretary. Before the church, where a young Rev. Dr. Martin Luther King Jr. was the pastor, became a main Boycott organizing center, there had long been discussions about organizing a bus boycott.

Dr. King and Ms. Parks may have been the most recognizable faces of the Boycott, but its success lay in the dynamic, sustained mass movement of the Black community, especially Black women. Organizers galvanized people who had cars — including this writer’s parents — to pick up and drop off carless workers, many of whom were domestic workers, at designated sites all around the city. Many walked miles to and from work including in all-white neighborhoods.

This grassroots organizing not only defeated the segregated transportation edict in the former capital of the Confederacy on Dec. 21, 1956, it was the opening shot of the modern day Civil Rights Movement throughout the Deep South — with mass demonstrations, marches, sit-ins, shutdowns and more in the midst of police and KKK violence.

From Montgomery to Bessemer

As this writer wrote in 2000, “No struggle takes place within a vacuum; no struggle is isolated from the general laws of nature and society. [T]o fully understand the Black struggle or the Black experience in the U.S. and its status today, we have to view its development in relationship to the overall class struggle. The Black struggle in this country has many rich lessons for us as workers, as progressives and as revolutionaries.” (“What is a nation?” from “A Voice from Harper’s Ferry,” see tinyurl.com/yxrc35c9)

One of those rich lessons coming from the Bus Boycott is taking place again in Bessemer, Ala., just 15 miles outside the former steel city of Birmingham. 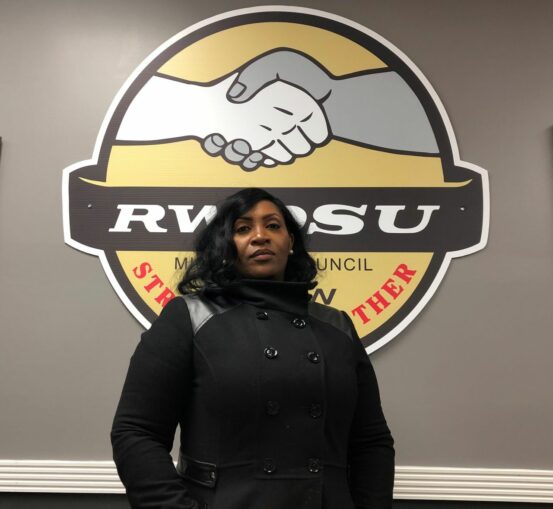 Jennifer Bates, an employee at the Bessemer Amazon facility, has been helping to organize the union drive. Of the majority-Black workforce there, almost half are women.

With a population of less than 30,000, the city has suddenly gained national and even international attention, because a group of majority Black workers are in the midst of a historic union organizing drive against Amazon — arguably the most powerful global corporation in the U.S. and perhaps the world.

On Feb. 8, these warehouse workers began a mail-in vote on representation, with the backing of the Retail, Wholesale and Department Store Union (RWDSU), in response to Amazon’s horrific working conditions, a lack of protection from COVID, low wages and racism from white management. And 80% of these workers are African American, with 43% being Black women.

Even though the workers at this Deep South warehouse number around only 5,800 out of a total 935,000 Amazon workers throughout the U.S., their struggle for a union will have an unprecedented ripple effect, not only for the workers in Alabama — only 8% are unionized — but for the entire global working class.

Alabama is one of 27 states with Taft-Hartley “right-to-work” laws. This means that joining a union is not a prerequisite for getting a job; “so-called” open shops thus purposely fracture union solidarity. Workers are then left at the mercy of racist and sexist bosses without any protection against abuse under a collective bargaining agreement.

The struggle to unionize in Bessemer has global implications, because Amazon is a corporation worth close to $1 trillion, whose profit-hungry tentacles stretch across several continents. Amazon represents modern monopoly capitalism 2.0, while in the 1950s during the Bus Boycott, mom and pop stores alongside Woolworth’s were the backbone of the economy.

Another important struggle occurring in parallel to the Bessemer struggle was the Jan. 1-31 strike by incarcerated workers throughout the Alabama Department of Corrections prison system. This work strike and “ 30 Day Economic Blackout” was led by the Free Alabama Movement. As incarcerated workers, they protested against some of the same conditions raised by the Bessemer workers — superexploitation, racism, physical brutality, horrific work conditions exacerbated by the pandemic — including no masks, lack of social distancing and healthy food, and more. The ADOC has been deemed by many as the most violent prison system in the country.  (Read “Alabama prisons: ON STRIKE!” at tinyurl.com/y458aakr)

In Alabama, Black people constitute 28% of state residents, but 43% of people in jail and 54% of people in prison. (al.com) There really is no fundamental difference between the racism and exploitation facing the Bessemer Amazon workers and the Alabama incarcerated workers except for the physical restraint preventing the imprisoned workers from walking out of their cells. As the Prisoners Solidarity Committee of Workers World Party demands, “Free them all!”

Just like the struggle in Montgomery over 65 years ago, the Bessemer Amazon workers and the incarcerated workers in Alabama are also counting on classwide solidarity between the organized and unorganized — not only to win the immediate battles that directly confront them, but to extend their struggle to win the rights of millions of workers globally.

These struggles are the real meaning of what Black History is all about.

The writer was born in Tuscaloosa, Ala. Tweet @MoniFromHome.