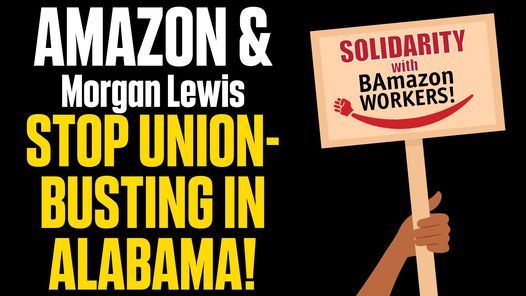 Today’s hired union-busting thugs are more likely to be high-paid lawyers tasked with turning labor laws — intended to protect workers — into weapons against union organizing. In the 21st century, bosses pay an estimated $340 million a year to a handful of law firms to do the dirty work to keep their companies union-free.

One particularly nefarious anti-labor firm is Morgan Lewis & Bockius — in 2020 the fourth largest U.S. law firm with 31 offices, over 2,200 lawyers and nearly $2.3 billion in annual revenue. Morgan Lewis’s website boasts of the firm’s ability to help companies “avoid union penetration and strategically shape bargaining units to minimize potential union organizing victories,” claiming to be effective both at the [bargaining] table and in a “behind the scenes role.”

In November 2020, when the Retail, Wholesale, and Department Store Union (RWDSU-UFCW) petitioned the National Labor Relations Board for a union election at the Amazon warehouse in Bessemer, Ala., Amazon immediately hired Harry Johnson, a former NLRB member and a lawyer at Morgan Lewis, to fight the election.

Morgan Lewis has insidiously helped Amazon remain union-free for years. It blocked union organizing efforts by technicians in 2014, and more recently it defended the company against workers’ lawsuits over inadequate COVID-19 safety and charges of discrimination filed by pro-Black Lives Matter workers.

Morgan Lewis has had over six decades to hone its union-busting skills. In the 1970s, the company appeared frequently in the AFL-CIO’s “Report on Union Busting.”

In June 1981, Morgan Lewis attorneys representing the Federal Aviation Administration were hired by President Ronald Reagan to infamously break the strike of the Professional Air Traffic Controllers (PATCO). That labor union defeat marked the opening shot in an antilabor offensive still impacting workers to this day.

Major League Baseball hired Morgan Lewis during both the 1990 spring lockout of players and the 1994-1995 baseball strike. In 2014, the firm was hired by the U.S. Postal Service to represent management’s interests during contract negotiations with the American Postal Workers Union.

In September 2018, Morgan Lewis was hired by McDonald’s to craft strategy to defeat the Fight for $15-and-a-Union campaign. Former President Donald Trump nominated Morgan Lewis partner John Ring to the NLRB, where he specifically promoted rulings that made it harder for McDonald’s workers to organize. Around the same time, the Wall Street Journal named Morgan Lewis’ top lawyers as members of the “$1,000-Plus-an-Hour Club,” based on the amount they billed. (news.artnet.com, June 11, 2020)

Morgan Lewis’s high-paid lawyers have represented many powerful corporations in cases before the NLRB, including General Motors, General Electric, Aramark, J.P. Morgan Chase & Co., Pfizer, Boeing and Marriott International — always defending the interests of the bosses against the workers.

On Feb. 20, cross-country solidarity rallies for the Amazon workers in Bessemer — who’ve dubbed themselves BAmazon Union — will include a spirited protest outside Morgan Lewis offices in Philadelphia. This and future days of solidarity will offer a way to challenge the firm’s union-busting role. A list of the location of other company offices is available on their website.