General Motors CEO Mary Barra raised more than a few eyebrows Jan. 28, when she announced GM would have an all-electric product line by 2035. This planned phaseout of fossil fuel-burning vehicles represents a serious departure from four years ago, when GM joined the Alliance of Automobile Manufacturers in calling on President-elect Donald Trump to scale back President Barack Obama’s fuel economy targets. 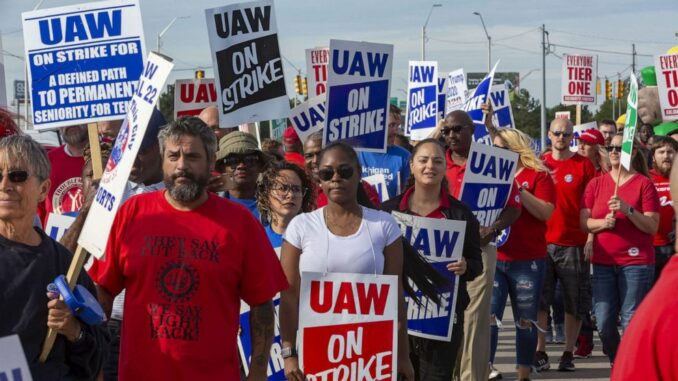 Why the about-face? It’s not like GM is a conscientious company, although CEO Barra won’t turn down an opportunity to boost its green reputation.

“When it comes to global automakers’ electric vehicle plans, all roads lead back to Beijing,” said Michael Dunne, a former president of G.M.’s Indonesia operations. The world’s shift to electric cars “is based on the Chinese technological road map,” added Yunshi Wang, director of the China Center for Energy and Transportation at University of California, Davis. (NY Times, Jan. 29)

Volkswagen and GM, the largest and fifth-largest car companies, sell more vehicles in China — where all-electric vehicles are fast becoming the norm — than in their home markets.

But the question remains: Why only produce electric vehicles for the U.S. market, where demand for conventional cars and trucks remains strong? Trump’s departure partly explains the shift. “Team Biden says it’s bullish on the potential of electric vehicles,” the Detroit News reported Nov. 19, 2020.

What the UAW leadership is — and isn’t — saying

But there is another factor, and one the United Auto Workers union needs to seriously address: lower labor costs. Electric vehicles require fewer components and take less time to build. This means cost savings for GM; without a serious fight, union members will face major job losses in both parts and final assembly plants.

In a previous study, the UAW concluded that a move away from internal combustion engines could cost 35,000 jobs. On Feb. 10, International President Rory Gamble said GM’s scenario “should bear out more discussion.” Of the Biden team he asked: “Will there be government support to make sure that these jobs are good-paying American jobs with wages and benefits and that members are free to collectively bargain to protect their standards of living?”

In fact it was the Obama/Biden administration that allowed GM and Chrysler to close over two dozen plants as part of the 2009 bankruptcies and the federal government bailouts.

Worker’s property right to a job

President Gamble spoke to the media one day before the most important anniversary in UAW history. Feb. 11 marked 84 years since the victory of the famous Flint Sit-down Strike, when workers occupying key plants for 44 days forced GM to recognize the union. Reviving historic demands could help the UAW address current threats to members’ livelihoods.

We cannot remember a UAW International President make the point that a job is a worker’s “property right” — that workers own their jobs. Waves of plant closings and mass layoffs, which have decimated the union’s ranks, are treated as a necessary evil to keep companies “profitable” and “competitive.”

But that was the chief legal argument then-UAW lead counsel, Attorney Maurice Sugar, made against those who proclaimed the sit-downs were unlawful seizures of company property. Union lawyers “placed the ‘worker’s right to his job,’ a concept which had been recommended for sympathetic consideration by the U.S. Commission on Industrial Relations in 1915, as the chief argument in favor of the worker sitting at his machine,” making a defense of the occupation. (Edward Levinson, “Labor on the March,” 1938)

Even Michigan Governor Frank Murphy and Frances Perkins, Secretary of Labor under President Franklin Roosevelt, agreed with that formulation.

Six–hour day, no cut in pay!

There was an important demand of the sit-down strike that to this day has not been realized: a 30-hour week for 40–hours pay. At the time a bill before Congress to establish 30 hours as a lawful workweek narrowly failed. Line workers’ productivity has risen exponentially since the UAW’s founding in 1935, but they are still working 40 hours or more at physically exhausting jobs — jobs that have become scarce!

The 1938 Fair Labor Standards Act only mandated time-and-a-half after 40 hours and set no limits on how many hours a boss could demand of an employee. The FLSA has never been updated to take into account technological advances that improve productivity — and eliminate jobs!

The UAW had pushed for a shorter work week, for the same pay, but dropped it after negotiating what is known as “the Treaty of Detroit” in 1950. This included annual raises to compensate for increased productivity, a “Cost of Living Allowance” and “Supplemental Unemployment Benefits” to laid-off workers on top of state unemployment compensation. These and other gains were taken away or reduced, during the 2009 bankruptcies, and have yet to be restored 12 years later.

If the Treaty of Detroit is dead, why not revisit the demand that was abandoned back then — 30 for 40!

If the roughly 150,000 UAW-represented workers at Ford, GM and Chrysler (now part of Stellantis) had their hours reduced to 30 hours per week, there would be work for another 50,000 workers. That’s 15,000 new jobs on top of the 35,000 that might be lost through conversion to electric vehicles!

It is past time for organized labor to return to its radical roots and raise radical demands. Six hour day; no cut in pay! A job is a right — we’re gonna fight, fight, fight!

Class collaboration, corruption and the right to vote

The top echelons of the UAW have been rocked by an embarrassing corruption scandal that a five-year federal investigation exposed. Two former International presidents, other members of the International Executive Board and key union staff have been tried and sentenced for bribe-taking, embezzlement of members’ dues money and accepting kickbacks from vendors. Top Chrysler executives have also been sent to prison.

All of the IEB and staff people are members of the Administration Caucus, which has maintained near-total control of the UAW for 70-plus years. The caucus had its roots in right-wing efforts in the late 1940s and early 1950s to purge UAW leaders who belonged to the Communist Party or the Socialist Workers Party.

The membership does not elect the IEB; the board is elected by delegates to the Constitutional Convention every four years. Delegates are often strong-armed into voting for handpicked candidates. The last time an outsider was elected to the IEB — Regional Director Jerry Tucker out of St. Louis – was 1986. Director Tucker was outspoken against the concession bargaining that has alienated rank-and-file autoworkers from their union leadership.

Now a federal judge has just approved a consent decree that President Gamble and U.S. Attorney Matthew Schneider reached to end the federal corruption probe. The decree subjects the union to six years of oversight by a federal monitor appointed by the judge. However, the monitor will be selected from three names chosen by the UAW.

Attorney Schneider could have insisted on electing the IEB directly — the “one member, one vote” which union reformers have long promoted, and what the federal government had ordered for the Teamsters union to address its widespread corruption and racketeering. Direct elections would give the rank and file a mechanism to hold their leadership accountable.

Instead the membership will have to vote on whether or not to switch to direct elections. The IEB will be lobbying, pressuring and “educating” — as President Gamble put it — the rank and file to keep things as they are.

One member, one vote and class struggle unionism

Federal investigators have been unable to show any evidence of malfeasance on the part of President Gamble. Some meaningful steps have been taken to control corruption since former President Gary Jones was removed. But the Administration Caucus is still firmly in charge — and still in a “partnership” with the auto bosses.

Many autoworkers, including this writer, watched the news conference where Gamble and Schneider announced the agreement. The two appeared rather chummy! The decree is more favorable to the IEB than might be expected from Schneider — a Trump appointee and no friend of organized labor.

It would appear that, from a ruling class perspective, the class collaborationist leadership at the helm of the UAW is preferable to real rank-and-file democracy.

Direct elections could lead to a struggle for rectification within the union, one that could rebuild it from the inside out in sync with its early history as a militant vanguard.

That points to the potential of a mass, grassroots campaign to convince members to vote in favor of one member, one vote. Changing how top leaders are elected is not a panacea, given the entrenched bureaucracy, corruption, nepotism and cronyism.

But it is time to clean house at Solidarity House, as the union headquarters is called. A movement in favor of direct elections can be the foundation to bring back class-struggle unionism.

Martha Grevatt is a retired UAW Chrysler worker who served on the executive board of UAW Local 869 and represented the local at the union’s 2018 Constitutional Convention.