A twitter post showed hundreds of students taking to the streets of Delmas, near Port-au-Prince, on the morning of Feb. 13, some carrying pictures of former President Jean-Bertrand Aristide. They were demanding President Jovenel Moïse, a U.S. puppet, leave office, especially since his term was over Feb. 7. A much larger march calling on Moïse to respect Haiti’s constitution took place in the afternoon. One sign in the later demonstration read, “The United States is the biggest enemy of Haiti.” 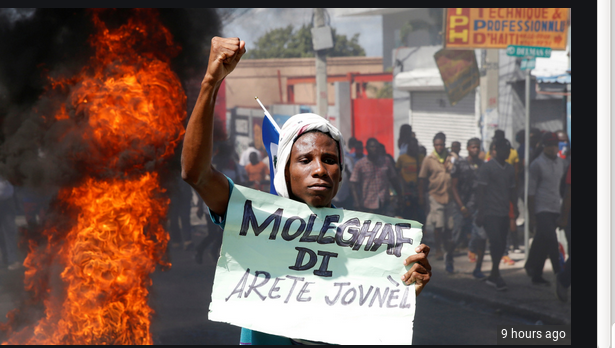 On Feb. 14, Haitians held a militant march on the U.S. embassy. One protester referring to the U.S. ambassador tweeted: “Sit your ass somewhere and stop interfering in our nation. Haiti is for Jean Jacques Dessalines and his children. It’s not for Lincoln, Bush or Clinton.” Dessalines was a leader of the Haitian Revolution of 1804. (Madame Boukman-Justice 4 Haiti, Twitter)

The huge demonstrations which were a major feature of Haitian protests before the pandemic began are not happening right now. Militant, smaller, more focused protests keep popping up to take their place. There were quite a number before Feb. 7, especially around the very effective general strikes on Feb. 1 and 2. Targets included the U.S. embassy, the presidential palace and U.N. offices. And a number involved strenuous interactions with the cops.

These protests didn’t stop when Moïse — after receiving full support from the U.S. — refused to leave office Feb. 7. The U.S. Immigration and Customs Enforcement deported 900 people — including many young children — to Haiti on Feb. 11.

There is a raging constitutional crisis going on in Haiti in the midst of a raging pandemic.

On Feb. 7, Moïse had a judge and a commanding officer in Haiti’s national police force arrested on charges of plotting to stage a coup and kill him. On Feb. 8, the opposition declared Joseph Mécène Jean-Louis — a judge on Haiti’s highest court, La Cour de cassation — Haiti’s interim president.

So far this declaration has received no international recognition. Even under Biden, the U.S. has firmly supported Moïse’s claim for another year in office. Haitians in the justice system, from judges to lawyers to court officials, have tweeted that they are on strike and won’t be handling any cases — civil or criminal — until Moïse is gone.

Beyond the conflict in the streets, which is overtly political, there have been a number of large-scale, so-called “gang” attacks on communities where opposition to Moïse is high. These “gangs” are well-armed and well-financed, and their public leaders are often ex-cops. There is a long-standing tradition of extralegal organizations in Haiti, such as the infamous Tonton Macoutes that support right-wing governments.

The words used by the U.N. and the U.S. Agency for International Development are a little antiseptic. They talk about “food insecurity,” when they really should be talking about hunger.

An anecdote reported by CNN at the end of December 2020 shows the impact of hunger on Haiti. Rob Freishtat is the head of emergency medicine at Children’s National Hospital in Washington, D.C., and has volunteered at the hospital in Milot since the earthquake 10 years ago. In a single week in December 2020, eight of his patients, all under two years old, died from hunger – more than he’s seen in 10 years.

Because food “donations” from the U.S. over the years have destroyed local markets for food, much of the food consumed in Haiti is imported. The decline of the gourde (Haiti’s currency) against the U.S. dollar has meant a sharp rise in food prices. Most people in Haiti live on less than $2 a day, so they have trouble paying more for food.

The Black Alliance for Peace, along with Popular Resistance, quickly called a Zoom meeting Feb. 11 with a number of progressive groups including Vets for Peace, Fanm Ayisyen (Haitian Women of South Florida), Workers World Party and Haïti-Liberté to work on plans for joint actions, including coordinated demonstrations and a press conference.

The Black Alliance for Peace issued a statement Feb. 12, which concludes: “. . . we understand our commitment to peace and People(s)-Centered Human Rights, social justice, democracy and self-determination cannot be realized without an organized people who are struggling for power.

“The people of Haiti are fighting for power, for the ability to determine their own destiny. Stand with them. Stand with us. Fight for freedom and for a new reality in Haiti and the world. No Compromise, No Retreat!”