In Springfield, Ore., essential health workers at The Rawlin at Riverbend Memory Care facility have set a Feb. 16 strike deadline to demand union recognition in order to improve staffing, training and turnover — and save residents’ lives. They are leading the way for workers throughout their community and the whole state. 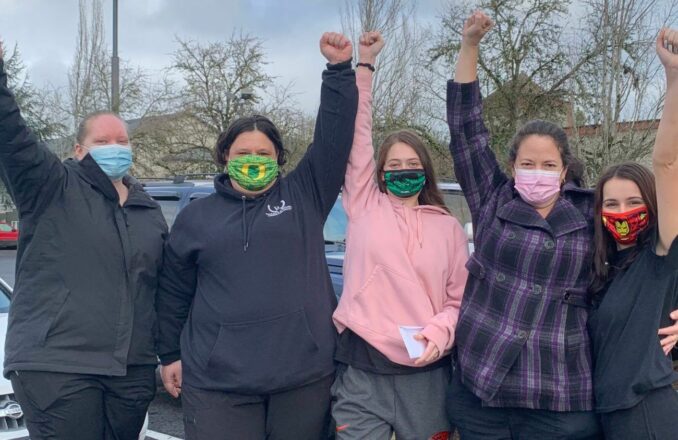 With not enough trained staff to care for occupants appropriately, The Rawlin had 21 residents die in the last eight weeks, including six from COVID-19. And patients are dying from other conditions like sepsis from bed sores or urinary tract infections, which are preventable if treated in time. But inexperienced temp workers are unable to recognize the symptoms. With understaffing, patients are left too long in soiled clothing with few showers. Families are seeing their loved ones dying in degrading and horrendous conditions.

The Rawlin Med Tech Summer Trosko announced the strike on YouTube: “We are done watching our residents and each other suffer from the effects of critical understaffing, extreme turnover due to low wages and traumatizing working conditions at The Rawlin. It’s breaking my heart. It’s so hard to go to work every day knowing people are dying, and there is nothing I can do about it. That’s why we are forming a union, asking for change.” (tinyurl.com/1gsd5lwp)

The workers announced that 85% of their unit have signed cards and a petition demanding union recognition. (tinyurl.com/y6hb4okz) Onelife, the company that owns The Rawlin, refuses to recognize their decision to unionize with Service Employees Union (SEIU).

“So,” Trosko announced, “today we have made the difficult decision to send a 10-day strike notice. We are demanding immediate recognition of our union and that The Rawlin add an extra staff person to every shift for worker and resident safety right now.”

Onelife received $260,858 in COVID relief funding. According to SEIU, the money has not been used to improve facility conditions. The Rawlin workers make $12.40 an hour, while owners Zach and Greg Falk live in luxury, with the latter paying cash in 2020 for a $6.5 million mansion in Arizona.

On Feb. 13 over 50 community members and leaders attended a zoom meeting led by Bob Bussel, labor research professor at University of Oregon, where people volunteered to donate food and organize picket line shifts. Russel said that COVID has shined a light on the deficiencies in health care, and The Rawlin workers and residents deserve respect.

In the zoom meeting, Hemes Ochoa, Rawlin medical technician, said conditions at the facility are “out of control.” A Dec. 10 COVID outbreak infected 47 residents and many workers including Ochoa. He said management harasses workers, follows them around and monitors their social media. Instead of increasing staff wages, bosses are hiring union-busting companies.

Leonard Stoehr, Springfield City Councilor and Teamsters 206 member, said he’s joining the picket line to recognize the union, and that this is not just a matter of The Rawlin, but a statewide issue. He affirmed he has a lot of respect for the very brave move by The Rawlin workers, putting themselves out front in the fight.