Unfortunately, the Democratic Party establishment is not able to grasp this concept.

But immigrants have had enough of false promises. 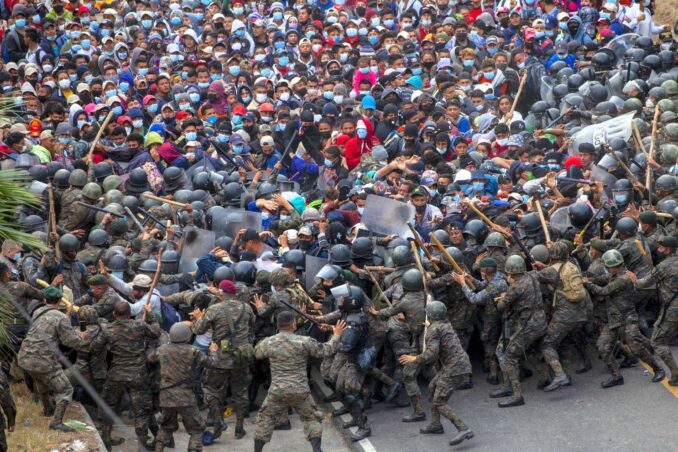 A caravan of thousands of migrants from Honduras headed to the U.S. southern border clashed with Guatemalan authorities in late January.

The immigrant/migrant/refugee population is hopeful about the election of President Joe Biden, primarily because it follows the exit of arch anti-immigrant Donald Trump. Their hopes have been fueled by progressive stands and edicts that Biden issued before taking office.

But more and more workers are understanding and demanding that enough is enough. Genuine full rights and privileges to be in this country are long overdue. Legalization has been earned a hundred times over.

What has Biden done so far?

The tangled web that is immigration policy in the U.S. is not easy to reform. It is meant to be cumbersome and bureaucratic.

On Jan. 20 according to Reuters, Biden signed “a half a dozen executive orders to reverse several hard-line immigration policies put in place by . . . Donald Trump, although migration experts warn that it will take months or longer to unravel many of the restrictions imposed in the past four years.” (tinyurl.com/1frsu3tu)

One of those orders is an attempt to end the “Remain in Mexico” policy — also known as the Migrant Protection Protocols. This onerous Trump edict cruelly sent most asylum seekers back to Mexico instead of letting people wait in this country. Under dire conditions, many living in tent cities, migrants and refugees had to wait in Mexico for their asylum hearings in U.S. courts.

According to the Texas Tribune, more than 70,000 people had been enrolled in the program. (Texas Tribune, Feb. 4) But even though Biden took these initial steps, over 20,000 asylum-seeking families are still stranded across the border.

This statelessness leaves these workers vulnerable to all kinds of abuses, including human trafficking and rape. Migrant organizations in Mexico and Central America face an overload of work, with fewer and fewer resources for the tens of thousands who are roaming the Americas in search of security.

Biden called for a moratorium on deportations, yet hundreds are still being deported. Immigrants from Jamaica, Guatemala, Haiti and Honduras have been sent back despite this moratorium.

In an example of how the Trump legacy has a hold, a U.S. District Judge for the Southern District of Texas granted a temporary restraining order to stop the Biden order. Worse yet, the Justice Department has not fought to block this inhumane order. (AP, Feb. 1)

The National Law Review reports President Biden signed three other executive orders on immigration Feb. 2. These include: “creating a task force that will seek to reunite families separated during the previous administration . . .” And the duties “include working to find parents and children who were separated at the border.”

However, this could be like the fox guarding the hen house.

It should be remembered that the NY Times reported Jan. 28, 2016, that the “Department of Health and Human Services placed more than a dozen immigrant children in the custody of human traffickers, after it failed to conduct background checks of caregivers.”

On Sept 3, 2020, CNN reported: “Hundreds of migrant children have been held in hotels and guarded by government contractors . . . as part of a secretive new system that advocates warn puts kids in danger. Immigrant and civil rights groups accuse the government of using the pandemic to create a shadow immigration system that skirts the law, with authorities denying vulnerable children protections they’re entitled to and rushing to kick them out of the country.

“‘These children are being held at what are essentially black sites, with no access to the outside world . . .’ said Karla Marisol Vargas, a senior attorney at the Texas Civil Rights Project.”

It is difficult to imagine therefore how a mere Biden task force can resolve this shocking problem.

The second order “addresses implementing a plan for safe and lawful migration,” calling “for the study . . . of the underlying issues that currently drive migrants from their homes, particularly . . . from Central America.”

This order can be problematic, leading to further delays. Perhaps lawmakers should look out the window. A weather report is not needed if you can see the rain pouring down. No study is necessary to know why workers are leaving their homelands. These issues are widely documented, and the primary reason is U.S. imperialism.

In 2009, the Obama administration, with Hillary Clinton as Secretary of State, supported and orchestrated a right-wing coup in Honduras. This further helped multinational corporations drain the economies and lands of these fertile countries. The people impacted by Obama/Clinton policy are now in tents in Matamoras, Mexico, waiting for rightly deserved asylum.

A recent hurricane devastated Honduras and forced workers out of their already impoverished situation. It led to another caravan of 7,000 people to the U.S. on foot and during a pandemic.

The Biden administration is talking about throwing more money to these corrupt governments, which will not help the masses at all.

The third and final executive order demands a “top-to-bottom review” of current immigration policies. It instructs agencies to review the “public charge” rule — “which permits the U.S. government to deny admission to an immigrant if it believes that individual is likely to accept certain public benefits.” The order further directs agencies to conduct “thorough reviews of recent regulations, policies and guidance that have created barriers to legal immigration in the United States.”

This sounds like a weighty bureaucratic exercise to delay and stall.

Undocumented workers have lived in the shadows long enough — they have paid taxes, contributed to the economy and their communities. DACA students have boldly stated they will not be pitted against their parents, neighbors or relatives. They do not want to be treated as some migrant elite; they want legalization for themselves and their community. This is a huge sign of solidarity and unity.

The pandemic proved to the entire country — and especially to the bosses and the ruling class — that undocumented and immigrant workers are essential. They deserve legalization now.

A fellow at the Migration Policy Institute stated, “This is the boldest immigration agenda any administration has put forward in generations,” (LA Times, Jan. 27)

But is it? Can the Biden administration really stand up to the arch reactionary Republicans, corporate vultures, bureaucratic entanglements and ICE agents who think and act like racist police? Can it stand up to the white supremacists who fear the turn of the tide when workers of color become the majority?

The Biden administration already had his initiative of a 100-day freeze on deportations temporarily blocked. So who really has the power to win full legalization, human and worker rights for migrant, refugees and the undocumented? Who has the political will to dismantle policies and institutions that deny rights to the people? Who will listen to Anthony Salgado?

Time will tell. But it’s now or never, Joe.