Maybe some thought that President Joe Biden was serious about doubling the minimum wage to $15 an hour and doing it during the pandemic when workers were most in need. That was never his plan. 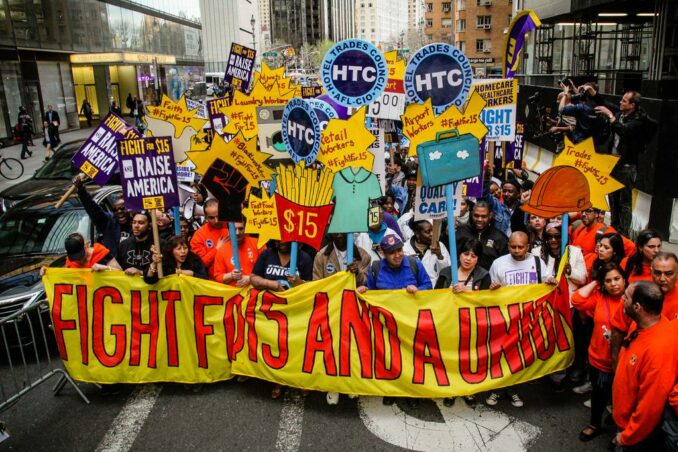 Republicans introduced an amendment seeking to prevent increasing the minimum wage under Biden’s $1.9 trillion stimulus package Feb. 4. The Senate passed the amendment unanimously, which means Democrats voted for it.

Even Bernie Sanders, chair of the Senate Budget Committee, said, “It was never my intent to increase the minimum wage to $15 an hour immediately during the pandemic.” Sanders proposes gradual increases over the next five years. (Business Insider, Feb. 6)

The last increase of the federal minimum wage was passed in 2007 and signed by George W. Bush. It raised the minimum from $6.55 to $7.25 an hour by 2009. There has been no increase from this pittance since. For tipped workers, disproportionately women of color, it’s even worse, with their federal minimum at $2.13 an hour!

Over the last few decades, workers’ purchasing power has drastically declined.  Even before the coronavirus pandemic, millions of families in the U.S. were forced to choose between food on the table or a roof overhead.

Meanwhile, average salaries for politicians in federal and state legislatures, where minimum wages are determined, have dramatically increased over the same time frame. As of 2020, over half of the members of Congress were millionaires.  Starting salaries for congresspersons begin at $174,000.

Living Wage Calculator estimates that one adult working full time (2,080 hours per year) would need to earn at least $12.45 an hour to cover typical living expenses, which differ widely by city and state. With a child, one adult would need $25.62 an hour. (tinyurl.com/1n1mjiiw)

Unemployment during the pandemic has drastically impacted workers’ ability to pay rents or mortgages. The stimulus bill signed in late December extended an earlier eviction moratorium only through Jan. 31. Biden’s proposed stimulus plan would extend the federal moratorium on evictions and foreclosures through Sept. 30, 2021, and allocate $30 billion more for emergency assistance for households.

None of the federal measures address how workers are supposed to pay back rent and mortgages when the moratoriums end.

Even before COVID-19 hit, minimum-wage workers did not earn enough to pay rents. Average studio apartment rent in the U.S. was $534 a month. The current minimum wage leaves a worker with only $377 for housing. (thebalance.com) By 2026, these numbers will be considerably higher.

Workers unable to pay for necessities in 2021 need that raise now. Stimulus checks barely make a dent. Biden and the Democrats hope that workers will forget about a wage increase and settle for another one-time stimulus check of $1,400 per individual. Yet that’s still too little, too late.

Limiting relief to the federal checks, without forcing wages to go up, takes the burden off the corporations who continue to underpay their workers. These same corporations were the primary beneficiaries of Trump’s 2017 tax cuts. While keeping workers’ wages below poverty levels for decades, CEOs — in the top 1% — have seen their compensation increase by 940% since 1978. During the same period, a typical worker’s income has risen by only 12%. (Economic Policy Institute)

Biden’s stimulus plan is intended to keep workers pacified while throwing more money into the economy for a short-term fix. The promise of doubling the minimum wage is the carrot, dangled out there in hopes that the coronavirus pandemic will subside and the economy will improve.

This bill does not begin to replace the income of the 22 million workers, a majority women and/or people of color, who have lost jobs due to the pandemic.

Workers must fight for higher wages and not look to Biden or the Democratic Party to do it for them. History shows that the only time a living wage has been legislated was when struggles in the streets and the workplace forced it.