February 4 was the birthday of Black Communist Harry Haywood, one of the great Marxist-Leninist thinkers, leaders and revolutionaries of the 20th century. Although Haywood was born over 100 years ago and has been deceased for over 30 years, his contributions to Marxism-Leninism and the struggle for Black Liberation and self-determination remain central in the fight for revolutionary socialism. 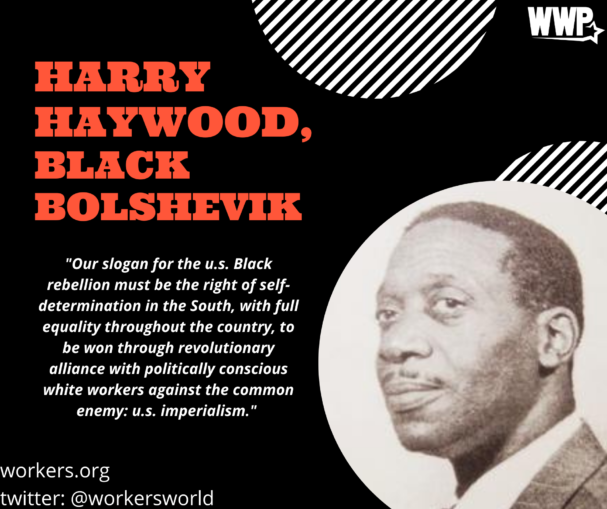 Although enslaved Africans forced into bondage in the U.S. were from different places with different cultures, Haywood argued that their multicentury experience of slavery forged them into a distinct people bound together by their economic super-exploitation in the development of the Deep South — geographically defined by Haywood as south from Virginia and Washington, D.C., and west to Texas.

V.I. Lenin, leader of the Bolshevik Revolution and the Soviet Union until his death in 1924, recognized African Americans as a distinct, oppressed nationality. In 1920, he wrote that there is a “clear distinction between the oppressed, dependent and subject nations and the oppressing, exploiting and sovereign nations.” (Draft Theses on National and Colonial Questions for the Second Congress of the Communist International)

The abrupt and violent end to Reconstruction — which had provided a 12-year period of some relief for Black workers following the end of chattel slavery and the Civil War — resulted in the construction of Jim Crow laws tying Black workers to the land again in new forms of slavery — prison and agrarian work. The former exists to this day in the prison-industrial complex. The era of Black sharecroppers and tenant farmers and their revolt against white supremacy and capitalism-imperialism is heavily documented in Robin D.G. Kelley’s groundbreaking book, “Hammer & Hoe: Alabama Communists During the Great Depression.”

Haywood, viewing Reconstruction as an unfinished bourgeois democratic revolution in the South, saw the end of Reconstruction through the Compromise of 1877 as a betrayal by the bourgeoisie, which plunged Black workers back into super-exploitation. This led to decades of heightened reaction, including the founding of the KKK, the “separate but equal” legal doctrine and Jim Crow segregation.

Haywood connected this repression to the rise of U.S. imperialism at the end of the 19th century. He tied it to the oppression and super-exploitation of landless Black workers in the South, who still worked the land they and their families had worked while enslaved.

A lifelong advocate for Black liberation

Haywood, from the 1920s until his death in 1985, advocated for the self-determination of all Black people — an oppressed nation within the U.S. — and full liberation from capitalism-imperialism, up to and including the right to separate from the U.S. Haywood theorized that the struggle for Black Liberation would come from the “national territory” of Black people — the Deep South.

The Black Belt thesis, presented by Harry Haywood to the Soviet Union and the CPSU, was adopted at the Sixth Congress of the Communist International in 1928, under Joseph Stalin’s leadership. However, it was less than popular in the U.S. and earned Haywood the contempt of many of his “comrades” in the CPUSA, who viewed racism simply as a moral problem and not as a problem of economic and political oppression. Though Haywood became a leader in the CPUSA for some time until his expulsion in the late 1950s, his position on the Black Question was routinely criticized for many years while he remained in that party.

Today Harry Haywood’s thesis still resounds with history: that Black people are an oppressed nation within the U.S. Currently, there are uprisings at prisons all across the state of Alabama and disruptions of the prison-industrial complex in surrounding Southern states, led by incarcerated Black workers such as those in the Free Alabama Movement and the Alabama Resistance Movement. But this struggle is carried out as well by incarcerated and paroled workers in California, Pennsylvania and across the country.

The majority-Black Amazon warehouse workers in Bessemer, Ala., are now fighting for a union, which would be the first ever Amazon union in the U.S. There is no doubt that if this union drive wins, it would have a ripple effect, with Amazon workers unionizing countrywide and worldwide, tearing a hole through the seemingly impenetrable armor of Amazon.

Devin Cole is a transgender Marxist organizer and writer. They are the president of Strive (Socialist Trans Initiative), a transgender advocacy organization in northwest Florida, and a member of the Workers World Party — Central Gulf Coast (Alabama, Florida and Mississippi) branch.