Over the last two weeks, blaring headlines and memes alike have proclaimed the opening of a new front expressing mass outrage at Wall Street — and in the most unlikely place: the stock market. 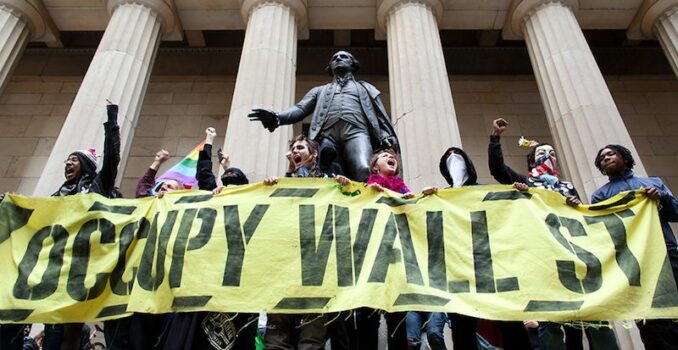 In 2011 Occupy Wall Street was a real revolt. The mad scramble to buy up GameStop stock was something much less.

To be sure, mass anger at obscene, ever-expanding wealth and the predatory nature of Wall Street speculators and multibillion-dollar hedge funds lies at the core of recent events on the stock market — and the satisfaction many felt watching them unfold.

But have these events fundamentally impacted the wealth and power of the ruling elite?

Beginning in mid-January, people outside of finance capital circles began using the popular social media site Reddit to coordinate buying stock of GameStop, a video game store. GameStop was chosen because it, among other retail businesses like movie theater company AMC, had become the target of Wall Street hedge funds like Melvin Capital and Citron Capital.

They were “shorting” the stock and stood to make millions from its continued decline. A “short” is essentially a gamble that the value of a stock will decline. If it does, the hedge fund or other entity that shorted the stock rakes in big money, but if it increases in value, they lose money.

Many on the Reddit forum cited the pain of job losses, foreclosures and other hardships they and their families endured during the 2008 capitalist crisis as motivating their desire to inflict financial loss on the big firms behind the stock market’s rampant speculation. Their intervention did temporarily help push GameStop’s stock up by more than 14,000% — spelling multibillion-dollar losses for the big hedge funds shorting the stock.

As the value of GameStop’s stock rose, the popular investing app “Robinhood” restricted its users’ ability to buy GameStop stock. This move earned the ire of many who saw the action for what it was — the rich protecting the rich.

Robinhood, a free app, makes its money by selling user data — including buying activity — to Citadel Securities, another hedge fund. Robinhood recently installed a glass barrier at the entrance to their California headquarters, as people driven to financial ruin after trading on the app began showing up to confront the company.

But who really came out on top?

Melvin Capital, one of the targets of the Reddit users’ GameStop buying spree, lost 53% of its value in January. It would seem that regular people had dealt a major setback to the financial elite. However, Melvin was quickly bailed out by other billionaires and hedge funds — including Citadel Securities, which came to the rescue to the tune of $2 billion.

For all the hedge funds like Melvin that lost money shorting GameStop’s stock, many others cashed in on the bubble. BlackRock — a firm that manages some $8 trillion in assets, dwarfing the economies of most of the world’s countries — made out, earning an estimated $2.4 billion. (Reuters, Jan. 27)

Now GameStop’s stock has fallen significantly, wiping out billions of dollars of value and creating huge losses for people who sunk money into company stock when it was skyrocketing.

If nothing more, the GameStop bubble reemphasized what has become even more starkly apparent during the COVID-19 pandemic and the resulting economic and social crises: Capitalism is an entirely irrational system, and the stock market has little connection to most people’s economic reality.

Since the pandemic began in the U.S. nearly one year ago, tens of millions of workers have lost their jobs, been evicted from their homes, gone hungry or lost loved ones due to inadequacies in the for-profit health care system.

Meanwhile, Wall Street stocks have soared to record highs. The wealth of billionaires in this country has increased by $1 trillion since the start of the pandemic, and 56 new billionaires have joined the elite club. Their collective wealth sits at around $4 trillion — a sum that is double the combined wealth of the poorest 165 million U.S. workers. (NBC, Dec. 30, 2020)

Congress — Democrats and Republicans alike — has wrung its hands over the most meager assistance for workers and oppressed, which has done little to stop the pain and suffering so many are experiencing. But they’ve been happy to hand over huge sums of cash to the big corporations, the banks and the Pentagon.

The Federal Reserve and central banks around the world have flooded the economy with trillions of dollars of cash and credit, slashing interest rates to stave off a financial crash likely to be the most disastrous in capitalism’s history.

Because capitalism is a system based on the private ownership of the means of production, these trillions have not been used to create or protect jobs, raise income or improve workers’ lives in any meaningful way in the midst of the pandemic. Instead, it’s been hoarded at the top, used by the rich to speculate on stocks at cheap prices and to prop up so-called “zombie” companies — corporations that earn minimal or zero profit and keep borrowing money just to stay afloat. In many cases, zombie corporations are unable to pay back the interest on the money they continually borrow; by some estimates they constitute about 20% of the economy.

Karl Marx and Friedrich Engels called financial assets like stocks and bonds “fictitious capital.” As opposed to real capital — capital which can be reinvested into the means of production — fictitious capital is a claim on some portion of the future profits of a corporation, thus “the capital-value of such paper is . . . wholly illusory.” The big corporations sell stock to raise funds for investment to more efficiently exploit labor power. A key feature of capitalism is that these companies must continually expand or risk being gobbled up by their competitors. (Capital Vol. III, Chapter 29)

By nearly every measure, the financial speculation that is central to the operation of the capitalist economy and the detachment of the stock market from the real economy is reaching a point never seen before.

Other similar indices also demonstrate that the current bubble in stocks compares only to that preceding the dot-com bust and the 1929 crash that ushered in the Great Depression. In other words, stock prices today are wildly inflated and in no way reflect the value of the wealth the working class is actually producing.

It’s not a question of if, but when this bubble will bust. The billionaires will look to manage their crisis by further attacking workers and the most oppressed with punishing austerity, mass layoffs, wage cuts and social service cutbacks.

While the actions by the people who banded together to go after Wall Street hedge funds were certainly righteous, they’re no substitute for building fighting organizations and preparing for class struggle. That is most needed, today and in the immediate future, in the face of the deepening and irresolvable crisis of the capitalist system.