Since the beginning of the most recent war on immigrants — which took shape starting in 2006 with the hypercriminalization of undocumented workers — the U.S. Congress has repeatedly talked of passing legislation labeled “Comprehensive Immigration Reform” to right some of those wrongs. 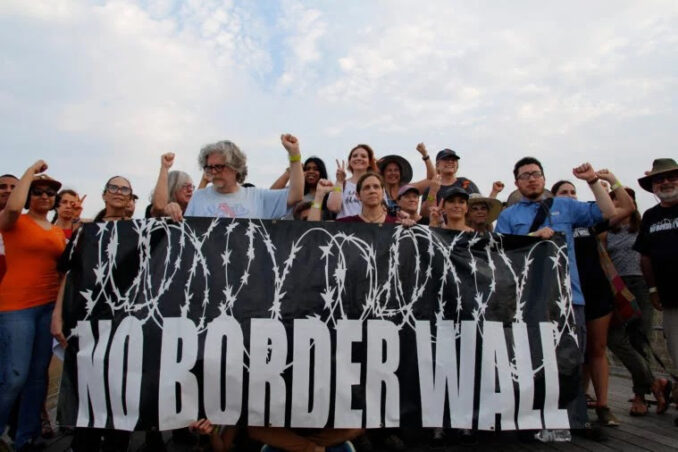 We are long past “reforms,” however.

Conditions during the past 15 years for documented, undocumented and refugee workers, not only in the U.S. but around the globe, have been dismal — which is an understatement. The time is now to bring workers out of the shadows, out of the detention centers and out of the countless deplorable migrant tent cities around the world and grant workers immediate full, legal, human and workers’ rights.

The condition of migrant workers is a crime against humanity. Relief and aid must happen now, not tomorrow.

According to the U.N., “more people than ever live in a country other than the one in which they were born. In 2019, the number of migrants globally reached an estimated 272 million. … The number of globally forcibly displaced people topped 70 million for the first time … [this] includes 26 million refugees, 3.5 million asylum seekers and over 41 million internally displaced persons.” (tinyurl.com/hbxsqafc)

It was not just in the U.S. that a white supremacist right-wing xenophobe used immigration to whip up a nativist base. Both Trump and right-wing leaders in Europe used the age-old tactic of divide and conquer the global working class.

It is no surprise that immigrant allies and organizations in the U.S. organized in record numbers to remove Donald Trump from office. Their work helped to oust one of the worst racist and misogynist presidents ever. This can be considered a win for them. Allies report that some migrants in camps in Matamoras, Mexico, actually cried with relief when they heard Trump had lost the election.

This should not come as a surprise when you consider the following news.

On Jan. 30, the Associated Press reported that at least 19 migrants were found shot and burned to death in Mexico near the U.S. border. The migrants appeared to be mainly Guatemalan and Mexican. “The bodies were found Jan. 22 piled in a burned-out truck on a dirt road in the northern border state of Tamaulipas. The truck had 113 bullet impacts.”

This kind of atrocity is the tip of the iceberg of crimes that occur against migrants and refugees as they try to make their way into developed countries.

In a camp in Lesbos, Greece, hundreds of refugees stand close to one another as they wait in line for food, as “less than one in five are wearing a face mask” despite the deadly pandemic sweeping the globe. Said one Cameroonian woman refugee: “We are like inside an overcrowded chicken farm. We are lumped together during food distribution; it’s impossible to have one meter of distance between us.” (InfoMigrants, Sept. 16, 2020)

Were it not for heroic African American health care worker, Dawn Wooten, it would not be known that migrant women were being forcibly sterilized in an ICE detention center in Irwin County, Ga. One woman reported that she had not even been properly anesthetized. (Workers World, Sept. 23, 2020)

End of an era?

Will the administration of Democrat Joe Biden usher in a wave of victories and gains for migrants and the undocumented in the U.S.?

The hard-working, greatly committed and superbly organized movement for immigrant rights is hopeful. But they are not unwise. They have been here before. They will not be duped again. They know they must keep up the fight.

When the first Black U.S. president was elected in 2008, not only immigrants but many people of color and progressives were ecstatic. Tens of thousands were hopeful. This writer will not forget scenes of people in Kenya out in the streets in celebration or meeting a woman in Harlem who had traveled from Jamaica just to see the historic inauguration.

It was a privilege to be in Harlem the night Barack Obama was elected. Black and Latinx people and many others poured into the streets in jubilation. The police could not contain the spontaneous takeover of the streets and did not try. The people controlled the streets that night.

But for those who know this voracious, despicable capitalist system, we KNOW WE must fight ON. No matter the election history being made or the glass ceiling being broken, THE STRUGGLE AGAINST THE SYSTEM MUST GO ON.

Indeed, Obama tragically earned the title of Deporter-in-Chief as he — with then-Vice President Biden — came to deport more people than any other U.S. president in history.

“Biden’s decision to use part of his political capital on immigration may seem bold to some, but to many who have watched years of immigration inaction, the move generates skepticism,” wrote Julio Ricardo Varela, founder of Latino Rebels. (tinyurl.com/y3zzg328)

A key leader of the Dreamers movement, Korina Iribe, a DACA recipient in Arizona, wrote in the New York Times, “The first version of the Dream Act, which would have given young people like me a path to citizenship, was introduced in 2001. But nearly 20 years on, our futures still hang in the balance. Comprehensive immigration reform … has failed to pass under both Republican and Democratic administrations.” (tinyurl.com/yy2lc4xs)

Since Biden’s election, she continued, he “has taken various actions on immigration, including fortifying DACA. He also sent Congress the U.S. Citizenship Act of 2021, which would offer a pathway to citizenship to the millions of undocumented immigrants living . . . [here]. The plan has been hailed as bold, but undocumented people have been here before. We can’t go on like this.”

In fact, the legislation Biden sent Congress DOES offer a pathway to “citizenship” — BUT would take almost 8 years and has many requirements and fees!

Haven’t the undocumented and their families faced enough? Haven’t they been terrorized by vigilantes at the border, Immigration and Customs Enforcement (ICE) and police agents around every corner, a vile Trump, malicious court and law officials, and factory owners who super-exploit at the workplace?

Haven’t immigrant workers shown in this horrid pandemic that they are essential to this country?

Eight years is too damn long.

Immediate legalization can be granted if Joe Biden wanted it. What is lacking is the political will to stand up to the Republicans and big business.

The time is now for all immigrants and refugees to be granted their full human and workers rights.

Open up the borders. Close the detention centers and the camps. Abolish ICE and the police or — in the words of the National Day Laborers Organizing Network “Abajo con la POLI-MIGRA! (Down with Pol-ICE).”

There is a reckoning taking place. Immigrants and allies are not just hopeful. They are mobilizing and stepping up their tactics in each phase of the struggle for their rights.

If justice does not happen now, what will this movement do next to demand what has already been earned a hundred times over?