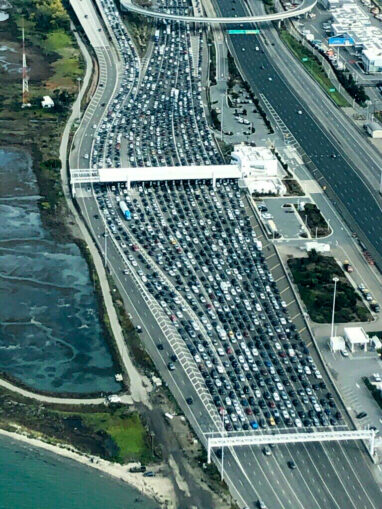 In a demand for prisoner release during COVID, a caravan of 200 cars occupies the San Francisco-Oakland Bay Bridge, Jan. 21.

Jan. 31 — Today as a plane pulled a banner, “Newsom: Free prisoners 2 stop Covid deaths,” through the sky over the San Francisco-Oakland Bay Bridge, protesters held signs against “State execution by COVID 19” and dropped banners from the bridge pedestrian path on the East Span. Simultaneously, a caravan of more than 200 cars — which started earlier at the Port of Oakland — drove onto the bridge. Advancing very slowly at 5 mph, lead cars fanned out to fill all five lanes of traffic, so that the caravan took at least an hour crossing the bridge.

The action challenged California Gov. Gavin Newsom to stop delaying the mass release of prisoners during the pandemic. Newsom, a Democrat, has freed only a handful of people so far. Nearly 200 prisoners in the state have already died from COVID, and there have been over 47,425 confirmed infections in state prisons.

This bold demonstration was organized by a coalition led by No Justice Under Capitalism, with support from Critical Resistance, CURYJ (Communities United for Restorative Youth Justice) and several other groups.

Before the car caravan left for the bridge, Courtney Morris with NJUC emceed a rally at Oakland’s Middle Harbor Shoreline Park. Morris spoke about efforts of NJUC and other organizations to force Newsom to act.

Participants, including KAGE Universal and Minister King X of California Prison Focus, read several messages of solidarity from activists incarcerated behind the walls of California’s prisons. KAGE Universal, while inside, helped broker an historic agreement to end hostilities between prisoner factions.

Allegra Taylor, the daughter of Hugo Pinell, spoke on the need to release aging prisoners, including several political prisoners at risk of death from COVID. Pinell, a member of the San Quentin Six, was murdered in 2015 at age 70, because guards “released” him into a yard filled with white racist prisoners after Pinell had been in solitary confinement for 45 years.

Nube Brown, managing editor of the San Francisco Bay View National Black Newspaper and a leader of CPF, called for immediate release of several prisoners who have been incarcerated for more than 50 years. She and others called for the end of the draconian sentence, Life Without Parole. A statewide campaign against LWOP, involving CPF, the California Coalition for Women Prisoners and others is building around the state. 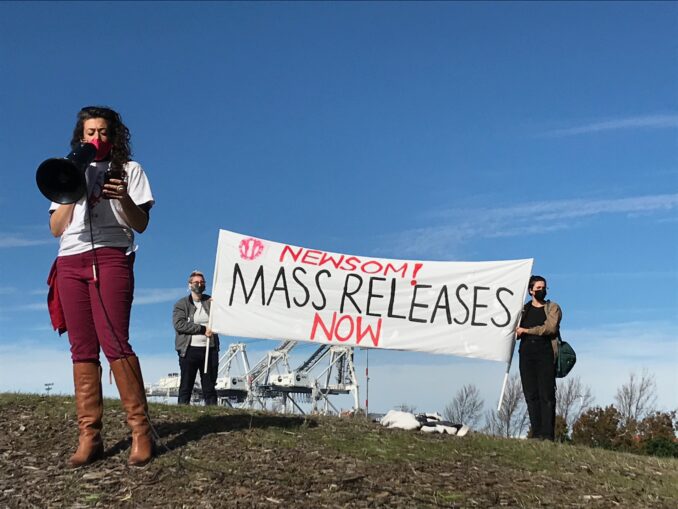 Courtney Morris of No Justice Under Capitalism speaks at Port of Oakland rally.

After the rally, the banner displays and the dramatic car caravan, about five cars were stopped by the California Highway Patrol and cited with tickets. But, all in all, the organizers considered the action a great success. The emphatic message to Newsom received broad media coverage before and after the event. (tinyurl.com/y6ey8azb)

According to Morris of NJUC, the coalition will continue its campaign to protest the mass incarceration of people in prisons and to save the lives of people inside who are receiving little or no adequate health care.

For more information check out the car caravan toolkit: tinyurl.com/y67958zf